Let's say we discover some new material on a moon of Saturn or Jupiter that allows us to fold space together (kind of like in Dune if you're familiar with it) and therefore teleport things. This process is performed by a teleportation device ("teleporter") and becomes increasingly unstable depended on the distance of the teleport or the mass of the payload.

This instability is combated by linking many teleporters together into large networks spread over sizable geographic areas. This equipment is expensive so that individuals probably do not own it but governments and even large corporations may.

Perhaps unimportant or irrelevant: in my current world, these devices generate some kind of a strong signal so that it's easy to locate them.

What are the consequences of this? We already have some space travel and a decent amount of colonization of the solar system. Clearly this will expedite interplanetary relationships and commerce as well as new colonization but what type of unforeseen side effects will arise?

Before I start I would like to point out that you are slightly contradicting yourself, or at least not providing enough information.

You say that the tech is dangerously unstable, but that the more "dense" the network, the more stable it becomes. Then you claim that size/distance make the process even more unstable, but that teleportation will revolutionize interplanetary travel. So ... is it unstable and unsafe, or capable of delivering a live human being to moons of Jupiter? Further still? How about Alpha Centauri? Specify, and I will edit my answer to match.

There will certainly be consequences, but will they be "unforeseen"?

The widespread adoption of this technology will depend greatly on how safe it is. If there's a 50-50 chance of ending up dead, or your cargo destroyed, then no one is going to use it, and it's going to become one of those footnotes in history.

But. Humanity would never let go of something as massive as teleportation without a fight. Someone, somewhere will find a way to make it safer. This timeline will greatly influence how quickly the technology would be adopted, however.

In all honesty, with something as huge as teleportation I would think that the military would move to make it exclusively theirs, and that only after many years, and due to government lobbying, would the corporate world get access to that same tech.

When the technology becomes wide-spread enough, as well as safe/reliable, great public and commercial networks will open, which will make travel around cities, around the world, and possibly around the solar system common, and cheap (in the long-run).

Many industries will go bankrupt. I don't think truck drivers, or shipping companies will all go bust, as some things will not be worth teleporting, however all of those industries will scale back tremendously.

This new market will greatly expand as it enters the public transportation sector, and skilled engineers and technicians will be needed - in the thousands. Universities will open whole new faculties devoted to teleportation studies. Vocational colleges teaching teleporter maintenance.

Having breakfast in Berlin, then lunch on the Moon, while being back home on Mars will seem normal to people.

There's also a security risk associated. People being able to travel "too freely", bypassing border control, or security. These details will all depend on how you further define your technology.

If you can teleport objects by bending space then you can generate energy for free using gravity. The simplest example is a water powered turbine where the water falls through the teleporter and back to the top, similar to the mind bending work of M.C. Esher: 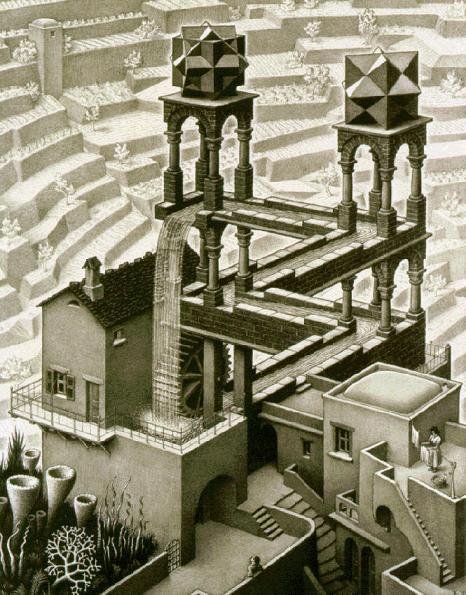 Getting a tiny amount of the material to bend space, a person could develop a small generator that (when aligned with gravity) will produce unlimited energy. That's kind of a big deal.

Initial adoption would be rough on a lot of industries, but could be minimized with a bit of care.

First would be international travel. If you can travel from China to California instantly, US Customs are still going to expect you go to talk to them before bringing your knockoff souvenirs into the country.
International security is going to be a bit worry for a while, and so of course it makes sense to put the first teleporters in international air ports as ultra instant first class for wealthy business travelers.

The aircraft manufacturers are not going to be happy about it at all, so you get around them by licensing them the rights to build the teleporters in their factories, and appease the airlines by letting them run the teleporters in the airports. After a couple years you loosen up restrictions a bit and allow teleporters for domestic travel between airport hubs.

Once people have gotten used to the idea and everyone is happy with how things work, license it to the auto manufacturers to build ones for city to city travel, and let them open franchise shops where you can drive, park, teleport and then rent a car on the other side if you need it. As more and more cities get teleporters the amount of road travel will tail off naturally, but because it's gradual the economy won't suffer as bad.

In regards to Samuel's idea of free energy, a better way to do it would be to put one end of a teleporter near the sun, and capture some of that energy in the form of heat to make steam and drive turbines.

If it becomes increasingly unstable depending on the distance of the teleport or the mass of the payload, then it's not likely to expedite interplanetary relationships and commerce. Certainly not if you are trying to move people or cargo to other planets via teleportation. Planets are far away, so you can expect the device to be very unstable, probably to the point where it is unusable.

Where it can accomplish that goal is to get people and cargo from the surface of the planet to an orbiting space station, eliminating the need to launch rockets. Rockets are very expensive and unstable. You can't launch very many of them, either, because of lack of launch facilities, assembly, testing, etc. Instead of rockets, teleport people and cargo into space, just like the Star Trek transporter. Then you can build a fleet of huge spacecraft, in orbit, that will only ever exist and operate in space. These spacecraft will take colonists back and forth to planets. At the destination, teleport the colonists down to the planet.

You could even build a series of stationary outposts between planets. The outposts would be spaced within a reasonably safe operating distance for the teleporter. Then you teleport from one outpost to another until you reach your destination. This eliminates the need to use space ships to travel, and it should also be reasonably quick to travel great distances, safely.

I suspect that teleportation would be immensely popular once the kinks were worked out because it reduces a lot of overhead. You don't have to build spaceships, shuttles to get to and from orbit, life support systems and all the other things needed for space travel, much less upkeep and maintenance.

Even if it takes a lot of energy to move an object via teleporter, you are still better off since your powerplants are nearby and not subjected to the environment of space. Teams of technical staff are right there, so problems can be addressed by calling in however many people you need, rather than hoping you brought enough trained people on the spaceship (or paying to haul around a technical staff which is largely unemployed, but stuck on the spaceship for many months at a time).

The final reason teleportation will be popular is you have cut the travel time. Even the fastest practical spacecraft can take months or years to get around the solar system (much longer of economical minimum energy orbits), while a teleported working at the speed of light will only require 8 hours to transmit across the solar system. The time value of money alone will create the conditions for an all out push to perfect teleportation (and if you use wormhole technology which provides the illusion of instantaneous travel, then you will see even more effort put into this. Simply stated, the interest costs of money tied up for months and years while the cargo is transported in space will be reduced to essentially zero if transportation was effectively instantaneous).

In terms of society, there will be a dwindling supply of spacecraft as that mode of transportation is abandoned, although there may be military and government/espionage uses for spacecraft which operate outside of the teleportation system. The could become important if the teleportation system is taken over by hostile groups or otherwise inaccessible or damaged. Space travel may become a sort of romantic myth, something like we consider the Vikings or great explorers from the late 1400's. During the adjustment period, there will also be a large displacement as thousands of skilled technicians become unemployed.

Government will also change, as the reach of bureaucrats will spread across the solar system; no one will be isolated by time and distance considerations. This also has implications as ideas, ideologies, religions, trade and even terrorists now have easy access to far more places.

Not the answer you're looking for? Browse other questions tagged society science-fiction or ask your own question.