What would Earth be like right now without the Black Death?

The black death wiped out anywhere between 20% and 50% of the human population, and so without it obviously the world population would be billions more than it is now. What I'm more interested in is how else history would be different without it, some notable related events include:

Of course we can only guess, but my guess I will provide.

Summary/TL;DR: In 2014, the difference wouldn't have been very big.

First let's look at the effects the black death had in this history.

Ok, so let's look at one the effect would be if each of these changes didn't occur.

Others have argued that there wouldn't be much difference. They might be right. Perhaps many of the changes were inevitable. However, I want to argue that there would have been a difference (perhaps just to be contrary). I'm going to assume that there never is a Black Death plague event, not just that it's delayed.

The Black Death made it easier to be a (surviving) serf. The shortage of labor meant that the aristocracy had to pay more attention to their serfs. Without that, there might never have been an English civil war. The anti-aristocracy movement might never have gotten off the ground because there wouldn't have been a middle class to fuel it.

Since the deaths were unevenly distributed (some families were wiped out while others were mostly intact), they had the effect of creating concentrations of wealth as some survivors were inheriting the wealth of many non-survivors. This created prosperity for some, allowing someone who had been poor to be at least middle class.

It's been argued that the aristocracy wouldn't have gone to the new world. But in a true feudal society, if the aristocracy didn't go, who would? Colonization was itself a result of the hungry middle class created by the Black Death.

So given all that, we would be further behind in the sciences, have no serious engineers, a more monolithic religious regime, no colonies, and a system of serfdom. And we'd be stuck there, much as the Egyptians were stuck. Lacking barbarians to overthrow us, we'd stay in a feudal, dark ages system.

To reiterate, my basic argument is that the Black Death created the middle class by concentrating the wealth of certain families and by making labor more valuable. Since it was the middle class that drove many of the positive changes in the arts, science, engineering, religion, and exploration, those changes would not have happened. This would have left Europe in a more stagnant state.

It has been theorized that between 90%-95% of the Native American population died of the plague soon after initial European contact. By the time of active colonization, there were vast tracts of uninhabited land not because it was virgin wilderness, but because the previous civilizations had died off.

Imagine any wars involving the American Indians with a 10x to 20x greater population available to them. Even if the native peoples been successfully subjugated (a large IF!) the population diversity would be entirely different. Rather than being a tiny minority dwelling on reservations, they would either be the majority ethnic group or largest minority (similar to African racial ratios).

The earth would be...wait for it...the same, or at least roughly equivalent. Disease is a natural inevitable check on humanity. Had the black death not wiped out large portions of Europe, something else would have. Sanitation was terrible, population density was high (for the time) and the world was opening up to a very limited global trade. Think of what happened to Native American populations when Europeans showed up, disease ran rampant. All that combined with limited medical care makes it very likely that some disease would have popped up and done the job.

Option 2: The more they stay the same...

I still think it is tough to avoid a disease, but maybe Europe lucked out and it happened significantly later, lets say 200 years later. So according to wikipedia:

The plague repeatedly returned to haunt Europe and the Mediterranean throughout the 14th to 17th centuries.[60] According to Biraben, the plague was present somewhere in Europe in every year between 1346 and 1671

If we move that 200 years into the future...we have 1546 - 1871. So first, what happened between 1346 and 1546 with no plague. Certain aspects would have evolved in a similar fashion, though at a slower rate. Peasant revolts, food shortages, religious and political conflict between nation states. The population would likely have ballooned and grown significantly larger. The landed elite would have gotten much more powerful as increasingly cheap labor stymied development. Standing armies and guards would have grown in number to manage the larger population. Likely a few traditional feudal systems would have been overthrown at least locally. Learning from the middle east and asia would have made their way into Europe much in the same way they did and exploration/colonization would have been much farther along.

Once the plague hit it would have been even more catastrophic than it was in reality as trade is more common on a global scale, population centers are larger and medicine still relies on limited understanding of what disease really is. Where the black death was a mainly Eurasian concept it now spreads to east asia and the america's wiping out settlements and colonies around the globe. This has the potential to break the European system completely and send it reeling backwards. Nations lose control of their colonies and native populations have time to advance and can later hold them off. Things stagnate for decades and religious fervor climbs to new heights making the Inquisition look like an afternoon at the spa. I could go on ...and on.

Option 3: No plague at all. This scenario is less interesting...in the case of no mass plague at all, I think things don't change as drastically as one may expect. Democracy still would have developed, international trade would still have created a middle class that had to be listened to by the elite, peasant revolts would have been more common, and in the end I think the world develops, if more slowly at first, much in the same way it did. Most of the social and economic changes that came out of the black death years were already underway when the plague first hit. Now the political implications are impossible to figure out. Maybe the turks don't overthrow the Byzantines and the empire lasts another couple hundred years...who knows.

Final Note: The specifics in my answer are less relevant than the overlying options and thought processes. When dealing with alternate history you are completely free to work out how you want things to function. Just keep in mind to get a setting that feels real the alternate reality needs to come about via the complexities that exist in real life. One single event is rarely going to drastically change history by itself.

It is generally thought that The Great Fire of London destroyed as much as it did because of conditions brought on by the plague. Without the great fire, London would not look the same as it does today. There would be no St. Paul's Cathedral, or any of the dozens of other beautiful Christopher Wren buildings shaping central London today. In fact, the great fire brought about the complete redesign of the layout of central London. I'm sure similar influences can be found in most of the large (and small) continental cities that suffered the plague. So I think it is fair to say that the black death had a profound influence on the existing architecture and layout of the cities of Europe.

Isaac Newton is a name we associate with shaping our modern world. He graduated with a B.A. in 1665. By all accounts, he was an undistinguished student. Shortly afterwards, the plague forced him to flee Cambridge and return to his home in Lincolnshire.

He spent the next two years at his family home, removed from the academic life of Cambridge. During this time he developed his theory of optics, his law of gravity, and the calculus. Would he have done the same if he was still confined to a ill suited academic environment?

One theory that has been advanced is that the devastation caused by the Black Death in Florence, which hit Europe between 1348 and 1350, resulted in a shift in the world view of people in 14th-century Italy. Italy was particularly badly hit by the plague, and it has been speculated that the resulting familiarity with death caused thinkers to dwell more on their lives on Earth, rather than on spirituality and the afterlife.[36] It has also been argued that the Black Death prompted a new wave of piety, manifested in the sponsorship of religious works of art.[37] However, this does not fully explain why the Renaissance occurred specifically in Italy in the 14th century. The Black Death was a pandemic that affected all of Europe in the ways described, not only Italy. The Renaissance's emergence in Italy was most likely the result of the complex interaction of the above factors.

The survivors of the plague found not only that the prices of food were cheaper but also found that lands were more abundant, and that most of them inherited property from their dead relatives.

'Old wealth' might have been distributed differently, prescribing drastic changes from our current culture and social structures. We also might not know how Venus was born: 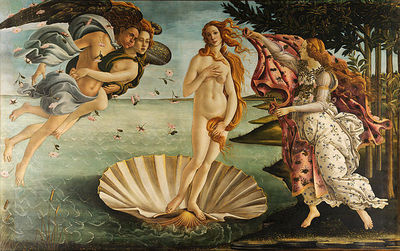 Not the answer you're looking for? Browse other questions tagged natural-disasters alternate-history or ask your own question.

36
Why would a magic world be stuck in medieval times?
11
What aspect of planet Earth must be changed to prevent the industrial revolution?

43
What would World War I outcomes be if the Tunguska event had occurred over London in 1908?
12
What did the night sky look like 63 million years ago?
31
What would be the consequences for Earth if the moon disappeared?
10
What would our knowledge of physics look like without astronomical observations?
47
Is this alternate history plausible? (Hard Sci-Fi, Realistic History)
1
How long would it take for an Earth-like planet to flood?
8
What would an asteroid impact feel like to someone standing on the moon?
5
A Rabid Black Death, Part I: How Virulent Would it Be?