The language tag challenge did remind me something which always baffles me on "Star Wars" franchise: Why on Tatooine would intelligent androids use beeping for communication?

So I call you, fellow Worldbuilders to help me create more plausible Star Wars droid:

The androids are "general purpose AI" by our standards and are able to learn in same (or faster) pace as normal kid. Also, it is safe to assume that just built android comes up with standard OS (Android, probably? Pun intended) preinstalled.

While droids can communicate with their masters, I think that to communicate amongst themselves, they would eventually come up with some language. But would that be beeping?

Thanks for help and if you feel giving this question better title, feel free to do so

EDIT: After first two comments, just for clarity: I am not asking why is R2D2 beeping. I am asking if any Star Wars android would beep given assumptions above 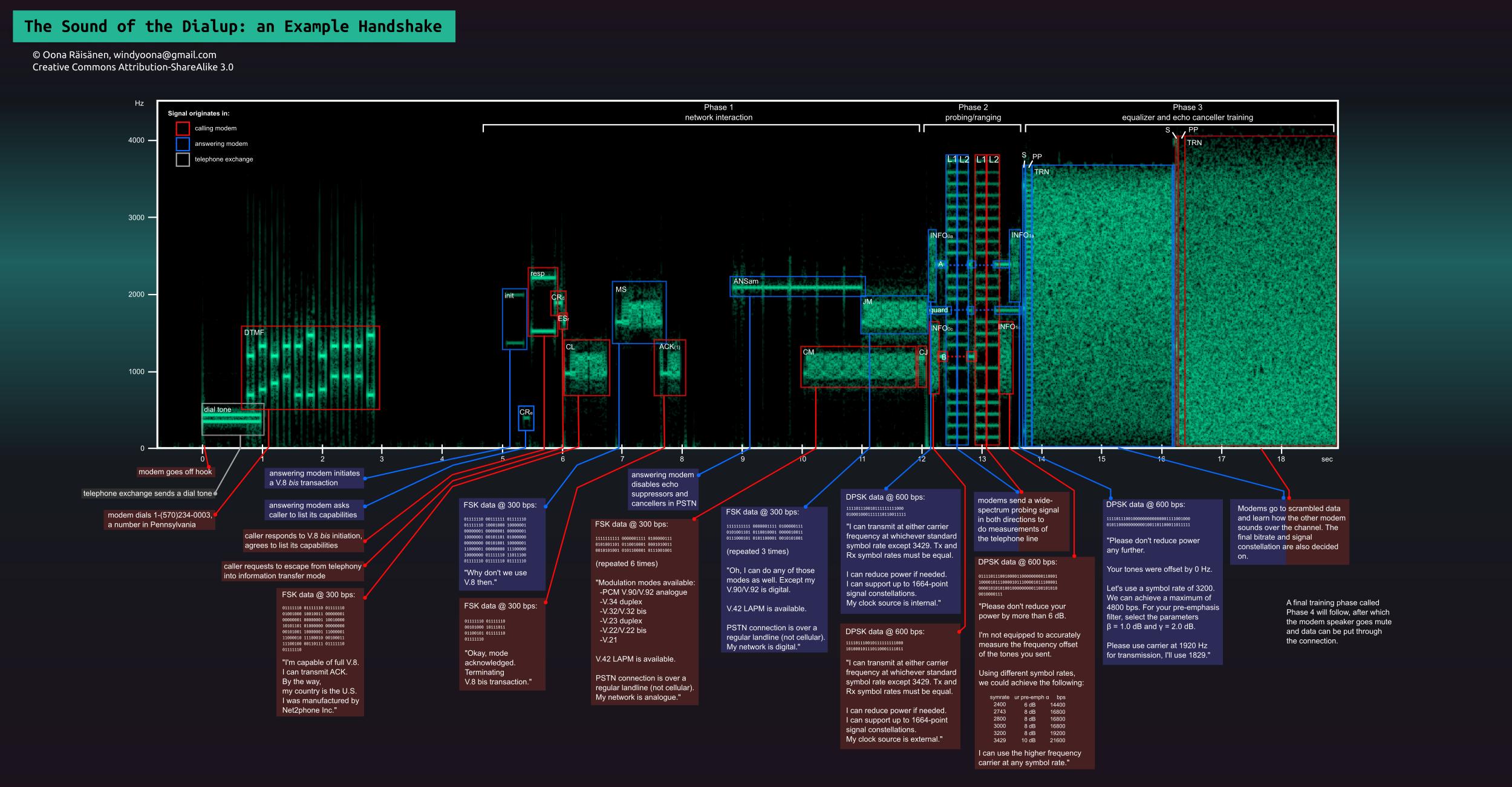 If the droids can only communicate with each other verbally, that is, with vibration in atmosphere within the human audible range (pretty speciest if you ask the Wookies), then they'll use highly complex words. Something similar to those tones your modem played when connecting to the internet or fax machines.

These words will be composed of modulated data on a wide range of audible frequencies simultaneously. The best way to imagine this is listening to someone with a very low voice and someone with a very high voice speak at the same time. The android is capable of filtering the incoming audio based on frequency and then demodulate them.

There has actually been work on this. Even work trying to make it sounds nice by playing with the modulation parameters. This paper reports on some audible communication reaching maximum rates of 3.4 Kbps using FSK (frequency shift keying) for a single carrier, which they improved in a few ways, even human perception of it:

The novel idea in our work is to study how music and other pleasant sounds can emerge in the audible band by carefully choosing some parameters of the modulation. By doing so, we surpass the low data rates imposed by imperceptibility while preserving the property of using messages that are tolerable to humans

By using ASK (amplitude shift keying) and some other fancy tricks they can get up to 10 Kbps on the higher frequency channels. While the droids could feasibly use much better modulation schemes than simple FSK or ASK to get significantly higher data rates per channel, even using this method to transfer data on perhaps ten simultaneous channels, they could likely get well over 75 Kbps. It's probably enough for standard communication.

I don't think this is as tricky as it sounds:

They are machines that think at blindingly fast speeds. Expressing their ideas (which might be system data, binary, etc) in a SPOKEN language is ludicrous. That was done simply because it's a movie, and the droids had to be "cute" for the audience.

In most likelihood droids would communicate via wireless transmissions, laser pulses, or some such manner (bluetooth, etc) which has nothing to do with having to "speak". A standard communication protocol would be in effect.

This is basically the internet. Billions of different devices communicating with one another over a vast network.

Some droids need to interact with humans, others not so much. That little box on wheels that cleans the floor wouldn't need to speak to anyone, or even be capable of complex thoughts.

C3PO is an ambassador droid, and knows a ridiculous number of languages, as well as being able to communicate with other droids.

R2D2 doesn't really need to "speak" to people. He would normally spend most of his time plugged into a space craft - outside the cockpit. No one could hear him speak, even if he tried. Thus, he wasn't taught "a language", even though realistically, he should have been able to communicate verbally when on the ground. We can assume that he communicates with the pilots via displaying information on their visors while in flight (targeting data, ship management parameters,etc)

Edit based on new criteria:

I honestly do not think it is reasonable to exclude wireless communications, or laser based communications (not blasters). Advanced technology basically can't exist without wireless, and we see many examples of such communications (interplanetary, across solar systems, etc) in the movies.

As I commented below, the only situation in which a droid might not be able to communicate wirelessly would be that it is damaged, or restricted from doing so due to situational (battlefield) conditions. At that point laser based communications would be critical.

Excluding even laser communications, however, beeping might make sense. A fast-forwarded binary type of communication based on "long" and "short" (on their scale, not for human ears) beeps. It would be horribly inefficient, and painful for any human listening to them, however.

"D" Latch, common and encrypted digital, and modulated with analog over vast areas. Your holographs were good, your voice communications were pitched with spikes, and Johnson's WHITE noise, and the glitches were shoddy at best, even STAR-WARS had that favor. :)

Sound can be a useful way of transmitting data.
We've been using modulated sound waves to send data down telephone lines for a while now via modems.
The problem with sound is how quickly it can be modulated and still have the pattern recognizable. You could improve this by not using a base 2 binary signal, and instead use overlapping wave patterns to transmit a higher base system.
There is also the problem of loud environments, but certain frequencies of sound would be able to cut though that with little trouble.

There are a few companies out there playing with the idea of transmitting data with sound, and I've heard of a computer virus that spreads with sound to infect airgapped computers.

Radio is superior to sound in almost every way:
* It's longer range
* It works through walls
* It's harder to jam
* It works in loud environments
* It's faster to modulate, meaning you can send more data quicker

But in the absence of radio it wouldn't be to bad, and could realistically be used for simple command communication, which is what a droid to droid conversation would most likely be about, unless you have a droid file sharing network...

Edit:
So interesting article I read about data transmission through visible light, called LiFi. The tl;dr version is that with distances of about 3 meters you can get data transmission speeds of up to 224 Gbps, which is an order of magnitude faster than WiFi. Their real world examples transferred a 1GB movie in 1 second. One other possible advantage of this over WiFi is that it could be directional, and so a little more private.

Not the answer you're looking for? Browse other questions tagged reality-check language android .

32
Why would robots use verbal communication?

4
How would two alien races decipher each others language?
5
How would humans adapt their language in response to moving through time at different rates relative each other?
4
Do intelligent organisms evolved to communicate only through scent have a language?
10
What language would the Anglo-French Empire use?
15
How would people with perfect memory design their language
3
How would a God(-like being) enforce use of a specific language?
4
Egypt and Israel. Would ever ally with each other?
7
Why would an intelligent creature, which can use human language, be unable to communicate with nearby humans?
4
Could a society work with members that cannot use language?