What would a gesture-based language look like in the absence of a spoken language?

People can, through sign language, express anything that can be expressed through spoken language so far as I know. So gestures can be fully expressive (there's enough "gesture-space" to build a language). Sign language, though, is derived from that spoken language, because it was developed to allow the hearing-impaired to converse with speakers. Sign language uses gestures mainly at the "word" level and the occasional phrase, though finger-spelling allow allows a signer to convey letters.

What would a gesture-based language look like if it developed organically in a civilization of people who do not speak and hear? For the sake of this question, assume that -- as with speech -- the gesture language develops well in advance of a written form (if a written form even develops at all): we have a civilization of people with no written or spoken language but they use gestures to communicate with each other.

Would the building blocks of the language still be words and grammar, or should we expect to see something very different develop (a la the analogy-based language of Darmok, though that specific example isn't feasible so please don't focus on that)?

We see this where there is an absence of a common spoken language between people. Gestures mimicking actions are far more intuitive likely the reason people with spoken language barriers resort to pantomiming or pseudo-signing to communicate. If you've ever communicated with someone who did not speak the same language as you, how would you ask them for something to eat? Probably the same way people who sign do: 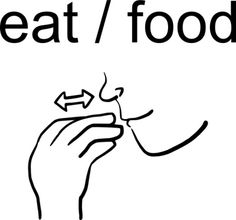 American Sign Language (ASL) is very visual and conceptual. ASL doesn't really try to mimic spoken language. It's actually likely to be understood by people regardless of their spoken language (if any) because it relies instead upon concepts and visualizations that don't require you to know what word is being used.

For instance the sign for 'year' is one fist orbiting the other one time.

The sign for 'teach' is the action of transferring knowledge from the mind and giving it to another (with the addition of person sign to specify a teacher; a person who teaches): 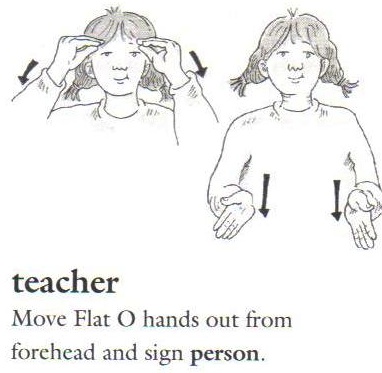 How to learn? Pick up that knowledge and put it in your own head (but maybe get some new glasses): 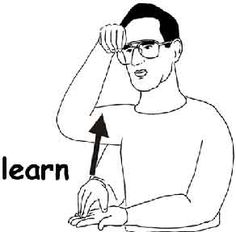 Advanced concepts can also be described. ASL is a living language, so it's constantly growing to include more advanced concepts. This article describes some expansions in physics:

The glossary builds on existing signs used by the deaf community and on “the visual or metaphorical relationship to what the things are like in real life”, explains O’Neill.

The signs also build on one another to help convey the scientific relationships between the terms. The sign for mass, for example, is a fist which is then used as a basis for the sign for density (a hand around the fist) and weight (the hand and fist moving downwards).

About 15yrs back I read an article comparing multiple forms of sign languages, including some that were truly natural languages. (in the sense that they were created by people trying to speak and not based on encoding another language nor created as some arbitrary project. Some of these involved feral children.)

They had some trends. Some of them were familiar. Pointing at things or relative stuff figured in prominently. Pantomime plays a part in pretty much all of these, as I recall, but often abbreviated as with something like ASL. (Which is, by the linguistic terms I learned, a living language but synthetic.) The grammar rules can literally be anything that any language could have. Those vary a ton.

Look up support and criticism of "Universal Grammar" to find the discussion of the question I think you may be trying to ask. Wiki P. is a good place to begin. https://en.wikipedia.org/wiki/Universal_grammar It's one of Chomsky's passions.

Sign language is in itself an analogy; it's an analogy of actions. It maps what humans do to a sign representing that action closely enough to be understood; this is then standardised with the introduction of a formal sign language.

A sign language of another civilisation would, therefore, be formed similarly to our sign languages. How does this civilisation act in certain scenarios? What do they do? Take those actions - such as eating - and form a sign for them. There are a number of other questions around the site about forming a language; you can also use the advice in those to record your language and use it again later.

In Nicaragua, before the 1970s, there was no Deaf community, and most pre-lingually Deaf people never developed much proficiency in any language.

In 1977, a Nicaraguan center for special education put together a program that brought together 50 Deaf children for education, and by the 1980s, numerous schools for the Deaf existed in Nicaragua.

Note that although these children were now attending schools for the Deaf, they were not being taught sign language. Instead, Nicaraguan schools for the Deaf focused on oralist teaching strategies, emphasizing lipreading and making use of residual hearing. These strategies have a poor success rate without cochlear implants, and most orally-taught Deaf children either switch to sign languages, experience serious language delays, or both.

However, what these schools did do was bring Deaf children together. Deaf children who are not exposed to sign language education naturally tend to invent simple signed communication systems, known as "home signs", to communicate with familiar individuals. However, in these schools for the Deaf, these children started learning and using each others' home signs. And each new year saw more young children joining the student body and imitating and improving on the older childrens' signed communication, until a proper sign language formed.

This sign language is one of a few examples of a sign language invented entirely by Deaf children, and therefore a good example of what a sign language designed in the absence of spoken language fluency would look like. It's not a perfect example because many of those children did know some spoken language, but few of them were truly fluent, especially at the time they were making their biggest mark in Nicaraguan Sign Language (which, as stated above, was primarily driven by innovations among the youngest children).

9
Is it possible for a language/method of passing information based purely on touch to develop?

10
Social engineering: Design a new language for a totalitarian state obsessed with scientific advancement
12
What would a language spoken by caninoids sound like?
4
Possibility of two-way sign language communication between humans and non-humanoid, dexterous alien
32
What event would cause a huge, dominant nation to adopt the language of a smaller, inferior one?
11
Natural gas based communication
6
Is a more visual language possible using spoken words?
18
Language that cannot be divided into words?
12
Could a pure sign language society be as advanced as a speaking society?
0
Why is English the only language spoken?