In a novel I am considering, the near-future of Earth is populated with vertical cities. I don't mean one tower; I mean a city of towers, built close together, each trying to surpass the other. The towers are so self-sufficient that the streets below (and the lowest levels of the towers) are no longer used (assume for the moment that we have invented flying cars). In addition, there are skyways linking all the buildings on multiple levels.

In asking questions about such a vertical city, I've discovered that the weight of the building plays a large part in how high it can be built (exactly where that limit is seems to be a point of some debate).

This has led me to wonder: Would it be possible to use helium to decrease the effective weight of the buildings? If, say, tubing was run through all the walls and filled with helium, wouldn't that make the buildings lighter? Or would the resulting weight decrease be too small to be of any consequence?

Thanks in advance for your time!

It wouldn't be effective.

The building would be lighter than a building with the same tubes filled with air, but the helium likely won't even offset the weight of the tubes. There are alternate lifting gases which provide different potential lift, but it's unlikely that even with vacuum (the best filler for lifting volumes) you'd get any significant benefit.

It's actually less effective the higher the building goes. As the atmosphere becomes less dense, the lifting potential decreases.

It would not work.

Using lighter weight gases to provide lift is based on buoyancy. The lighter gas is less dense than the air around it, so the air around it pushes it up just like the denser water pushes a boat up to the surface. The theoretical limit of this process is to use the lightest fill possible: vacuum. At this point, you get an amount of lift equal to the mass of air displaced.

Air is roughly a kilogram per cubic meter (1.225 kg/m3, actually, but we can round to make the visualization easier). This means that a typical 10kg cinderblock would require 10 cubic meters of displaced air. The numbers are actually worse than that, because you also have to account for the material containing the light gas or vacuum, but in the case of building materials, the numbers are clear enough even without this correction. Here's a sense of scale for that: 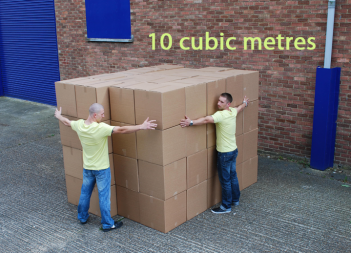 Now lets consider a typical skyscraper construction, using steel. Steel girders can vary in mass a lot, but the kind they use in skyscrapers is roughly 50kg per linear foot. Thus a 100ft tall building (roughly 10 stories) would need a girder 100 feet long, or 5000kg. That's 5000 cubic meters of gas to lift. That's reasonably close to the fill of a Goodyear blimp, and that's just to lift one girder:

The largest airship to ever fly was the Hindenburg, with 200,000 cubic meters. That's enough to lift 200,000kg of mass into the air. Hindenburg obviously lifted less because its fill was hydrogen, not pure vacuum, and it had to account for the mass of its skin. Actual cargo/crew mass was about 10,000kg, 1/20th the theoretical values, so it could have lifted two of those 10 story girders.

So what if we were serious? What if we threw all limits to the wind, and just decided to lift one of the World Trade Centers (before they collapsed). Records show each tower massed about 450,000,000kg, so 450,000,000 m3 of gas. That'd be 0.45 cubic kilometers of gas. That's not a large area for nature, but that's a tremendous size for a human construction (the Hoover dam comes in at about 1/200th that volume of concrete). That's just to lift one building!

And all of that is ignoring the structural challenges that come with such lift sources. It's ignoring all of the mass of the skin and wiring needed to actually support things. If the Hindenburg's ratio of a theoretical 200,000kg to actual 10,000kg is scaled up, that gas envelope would have to be 9 cubic kilometers in volume!

How big are these numbers? Well, even using the theoretical rate, you'll be forced to use either vacuum (which requires very heavy skins) or hydrogen. Why not helium? Modern estimates are that there's only about .25 cubic kilometers of helium left in North America (deep in natural gas deposits). You would literally use up a good chunk of the world's remaining helium to do the job!

And thus, we stay on the ground. If you really want to leverage lifting gasses in this way, I'd recommend a shift in point of view. Rather than starting with a city and trying to lift it, start with a dirigible and try to figure out how to adapt the concept of a city to work within it. It's much easier to change how people think about cities than it is to lift a city in the air.

OK, let's first dispense with the tubes concept. Helium is breathable. Just replace the nitrogen in the air with helium. This will maximize the volume of helium inside the building.

So every 300 or so floors, this would save enough weight to add one additional floor. And that assumes that there is no weight cost to seal the helium inside. How do you replace carbon dioxide with oxygen? Usually gas exchange would handle that. But that would also replace the helium with nitrogen. So if converting carbon dioxide to oxygen takes equipment or vegetation weighing more than .3% of the building weight, you lose your edge.

Not really. The tubing would all but negate the lightness of the helium, would interfere with structural design, and more importantly, would take up the entire building. Let's take a blimp. It has a tiny car and a massive balloon about 10 times its size or more. You do that with a building, and the whole thing is full of hydrogen, or in your case, helium. No space left, except a tiny amount. Much simpler to have buildings brace on to each other with some sort of brackets, and be thus inter-connected. This also lets you use that bridge idea. Furthermore, the taller the building, the less effective the gas. And from a design perspective, you have just laced the entire building with a highly flammable gas and put it near a bunch of other buildings with thousands of people inside. Big Badda Boom! That's for hydrogen. For helium, you've added a potentially devastating alternative medium that you can't breathe. Suddenly, you get a tiny leak, and people start talking in high voices and then keel over.

TLDR: You end up composing the building mostly of said tubing and the gas therein, which is deadly in one or more respects.

My guess: YES, if you modify the design. Here is why:

Well if a Skylifter** can lift 150 tonnes, surely wouldn't a Skylifter could be able to be attached to the end of a Skyscraper, or even a few?

1) If the building is made out of Carbon Composites or CNT then it could be quite strong & light, much more so than today's buildings. Definitely <150 tonnes. And these are getting cheaper to manufacture. Research into BNNT is even more promising in terms of strength.

2) Then consider that the buildings (either in the sky, tethered to the ground; or skyscrapers) don't need it have a lot of heavy things like swimming pools or cars in them (they can be on the ground). And light VTOL vehicles for transport, takeoff from the roof (prototypes already made).

3) The tubes in the walls wouldn't work, for reasons just described-too small. But entire Carbon composite walls could be filled with helium as well. This would counter-weight the building material weight. Someone mentioned breathing helium as a risk. Not really: divers & children at parties breath in helium. It would only be a danger if their was no oxygen as well. And don't we have emergency systems for dangers anyway?

Why wouldn't this modified design be feasible, if all that technology already exists, just hasn't been put together? Looks do-able to me =^)

I think sometimes people feel it shows intelligence to show why something can't work, rather than create designs that solve problems. That is what engineering & design is about.

No, the lifting capacity would not offset the weight to a degree enough to bother with. Instead, I would hand-wave a carbon-nanotube-like building material stronger than steel, but weighing as much as styrofoam.

The weight of the building is based on solid materials, not gas. Airships use helium not to lose weight, but to stay afloat.

The reason modern skyscrapers can't be built of stone like the classic buildings (Notre Dame, the Colosseum, to name a few) is that any bigger would put the building at odds with the very force of gravity. That is why modern skyscrapers are built via the curtain wall. Details on the pros--and cons--of the curtain wall can be found here: https://en.wikipedia.org/wiki/Curtain_wall_%28architecture%29

Not the answer you're looking for? Browse other questions tagged reality-check near-future construction or ask your own question.

20
Could a Super-Light Gas Improve Heavy Armor?
7
What is the sack-to-ship ratio?
6
Vertical City - How High?

5
Vertical city - effects on climate?
21
Vertical City - Why build it?
6
Vertical City - How High?
6
Transporting cargo within a city using tiny rail cars, or conveyor belts, or pneumatic post
6
City defenses against kaiju attacks?
3
Would using carbon dioxide as fuel work to reduce the greenhouse effect?
7
Practical uses for a city on top of another city?
18
How quickly could a country build a tall concrete wall around a city?