What is a ranged weapon that can be used for self defense that does not use exploding propellant (firearm) or that is not primitively connected to any device before the firearm.

I have thought about the following:

Any gun that propels a projectile with air or a spring should meet the criteria above. Some of these that are available today fire a pellet or slug with a higher kinetic energy than a .22 bullet.

A rail or gauss style gun could meet the criteria to fire some form of projectile.

A gyrojet-style gun that fires self-propelled mini-rockets could meet this criteria and use either a compressed propellant or some form of chemical reaction to propel the rockets.

Some form of air vortex cannon could possibly meet the criteria, although it would probably be bulkier than a modern firearm and wouldn't fire a consumable projectile.

There are tazer-style weapons that fire a self-contained slug instead of keeping the battery in the tazer itself.

There are some knives that can fire a spring-loaded blade (Spetsnaz knives) but they are generally single-use.

A modern compound bow certainly isn't something primitive or basic - they can be fairly compact, accurate, and powerful. Same thing goes for modern crossbows.

A speargun (air propelled or spring / elastic fired) isn't primitive either - although it fires a spear / dart it's more than a pointy stick.

Um, I guess a slingshot (wrist rocket) would probably qualify as well. Maybe a blowgun that fires some sort of round containing poison / tranquilizers?

Airgun shooting "ball bearing" pellets. It can use an electric pump or a gas cyllinder for propellant, autoloader mechanism like in ASG, and generally any typical ASG solutions.

It would pass under most jurisdictions when using plastic pellets for ASG use; the bullet energy would classify it as sports airgun/ASG replica.

The trick would be in making it "overnegineered" - durable enough to withstand pressures much higher than in ASG. You can "dial in" the desired air/gas pressure, use metal balls instead of plastic, and as result you have a good deterrent/stun weapon - a good hit to the head would knock most enemies out; the bullets wouldn't penetrate clothes but they would bruise badly and hurt a lot, and this being automatic gun allows for a fire rate no "tough guy" could withstand.

You can also load it (manually) with a sharp-tipped bolt and use it as a lethal weapon.

Of course it would suffer typical "round bullet" problems of accuracy, but 25 meters would still be within reason.

The sling meets all your criteria and can be easily obtained and hidden or disguised. and there are small rocks everywhere.

It off course will take some practice to get good at it but it was even used to defeat the Philistines. ;) 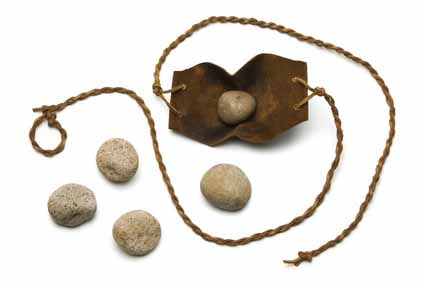 A slingshot comes to mind, but it's not very futuristic or necessarily as effective as you have specified. I've heard of self-defence style guns that are gas-powered and fire ceramic balls (along with other types of ammo). You also get pump-action air rifles.

How about some sort of hybrid? A weapon that is pump-action to charge, but can fire all sorts of materials on hand, from utensils to stones lying around. Something like a pump-action blunderbuss?

The only device that seems to fit your criteria would be an electrically powered weapon like a railgun or coilgun. The amount of electrical energy can be controlled to vary the speed and impact energy of the projectile (although there would be some sort of "minimum" speed just to allow the forces to act on the projectile in the first place)

Small, hand held devices of this sort have not been demonstrated, but prototype "mass drivers" (a form of coil gun) have been built on table tops to demonstrate the principle, so a rifle sized device is conceivable. Your major issue is the electrical energy. In order to meet your requirements, the user will need a backpack full of charged capacitors, and possibly a small generator as well. One of the reasons that firearms are powered by chemical propellent (or cars powered by hydrocarbon fuels) is the incredible energy density of these materials compared to batteries. The Chevy "Volt" needs a ton of batteries to go @ 40 miles, and a 45l fuel tank to give it a range of almost 400km, which should give a graphic idea of the difference.

While it might be possible to "beam" power to a receiver attached to the weapon, I would not advise that; the US Army is experimenting with using microwave beams as crowd control devices (Active Denial System) which give people the sensation of "being on fire" and forcing them to run away. A person using an electrically charged weapon would have to be well clear of theca power beam or obvious problems will occur. More practically, the user should be in the HUMVEE and using the beam directly.... 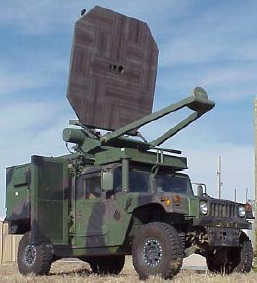 What about some sort of device that contains an electric motor? Turning fast enough, it would be attached to a shaft or something that would launch the projectile.

How about a sticky grenade? You pull the pin and throw it. Instead of explosive and shrapnel it ejects a mess of strong fibers and very fast-setting glue. Your assailant will be incapacitated and stuck to the ground, walls, trees. Normally non lethal but could kill if the target fell face down in water or if it covered his mouth and nose.

ISTR this thing has actually been prototyped.

Another thing that has been built is a wireless tazer. A high power laser ionizes the air to the target and a high voltage zap travels like lightning down the ionisation track. Problem is if the laser is scattered the stray light could blind the shooter or a bystander.

Finally an oddball idea I just had. Two or more micro-drones 'mosquitos'. What do they do? Fly into the target's ears and make noise above the pain threshold by vibrating on his eardrums. Such devices could also target eyes and nostrils with chemicals of various degrees of nastiness.

How about anti-tank rockets? They use rocket power rather than gun power to accelerate the projectile. For anti-personnel use you could omit the warhead, a hit will still be lethal even if you have no boom.

There are several so called non-lethal weapons that would fit your criteria. One option I would especially suggest is a gun similar to those used for paintball. It is powered by air pressure, is semiautomatic and fires balls not filled with paint but with a mixture of powdered pepper and chilli extract (Capsaicin). When you hit the target it doesn't only hurt from the hit but the ball releases a localized cloud that incapacitates those who breathe it in.

I will go full rebel here and instead of thinking about railguns and gauss rifles and tasers and zat'nik'tels and other complicated stuff, I will give you some examples of what we already have.

Grenade launcher with tear gas. Incapacitates opponents, has the range, can use compressed gas instead of gunpowder.

Harpoons and slingshots. Look for the slingshot channel on Youtube. Legal & dangerous.

Air guns. Some air guns could be used for hunting big game. power, range, no gunpowder. With the right ammunition you could make a riot gun.

9
Ranged weapon that can shoot through obstacles without destroying them
27
Projectile weaponization of water
10
How would the rules for carry and use of weapons be affected by reliable stun guns?
5
How would a chemically powered gun work?
9
Could antimatter be used as the propellant in a gun?
23
What is a good reason for every spaceship to carry a weapon on board?
15
How do you make a gun that shoots melee weapons and/or swords?
5
How to kill people with blaster weapons
16
Taking the bayonet to its logical conclusion. Or, the pike-rifle