Impacts of a stellar Jupiter

In the book 2010: Odyssey Two by Arthur C. Clarke, Jupiter is turned into a star. Presumably this is done by making it more dense, so if Jupiter were to reach that density and become a star, what would be the impacts on the Solar System?

The impact would vary greatly depending on where you are in the Solar system.

Firstly, assuming the actual mass of Jupiter has not changed then it will still hold its current place in orbit, although there may be some odd effects while it is first collapsing.

As the calculations here show the actual impact on earth would be minor, some nights would be a little brighter. There would be a tiny bit more heat.

The effect on the other planets would also be small, they would get more heat and light a they passed Jupiter in their orbital paths but then that effect would fade as they moved further apart.

The place where you are going to see a change is the moons of Jupiter. Assuming they survived the process that ignited the gas giant they would immediately have a large sun immediately above them in the sky. This sun could easily be so bright it turned them all to cinders, however if the brightness was tuned appropriately it could actually move some or all of the moons into the habitable zone.

You can expect to see the frozen surface of Europa melting, potentially even forming an atmosphere. The other moons too would greatly increase in temperature, and the possibility of them getting to the correct temperature for life as we know it cannot be ignored.

Io, Europa, Ganymede and Callisto are all sizable moons. Ganymede as the largest has twice the mass of our own moon and would be a promising place for life to develop if it was able to hold onto an atmosphere.

One interesting point though is that all of these moons are tidally locked, if Jupiter turned into a star they would all always have one side pointed towards the new star. That would make for some very odd weather patterns on the surface as discussed in some other questions on this site.

If Jupiter turns into a star, it would likely turn into the least massive star possible. This would make it a red dwarf - in particular, a red dwarf of spectral type M9V. We can infer a few key properties from this:

In other words, Jupiter would get much more massive but a little bit smaller. It would be fairly dim in comparison to the Sun.

What would be affected first? I'd put its moons on the table. By Kepler's third law, the period of an orbiting body is $$P=\sqrt{\frac{a^3}{M}}$$ where $a$ is its semi-major axis and $M$ is the mass of the body it orbits. Since Jupiter has increased dramatically in mass, the periods of it satellites will drastically decrease, and they'll speed up quite a lot - both by a factor of about 9.

So the moons would probably be orbiting at a much quicker rate. But what else? Well, there's always the Roche limit to contend with. Inside the Roche limit, a satellite will be torn apart. Now, $R\propto M^{1/3}$, where $R$ is the Roche limit and $M$ is the mass of Jupiter. Therefore, the Roche limit would increase by a factor of 4.36. This would tear apart many of Jupiter's inner moons, likely forming a more dramatic ring system (Jupiter already has a ring, but it's not very massive).

Let's go even further out. Would the other planets be affected? Technically, yes. I'd worry the most about Saturn. At its closest, it's $4.4 \text { AU}$ away from Jupiter. Is that an issue? I'd say yes; if Jupiter became a star when it was this close to Saturn, there's a chance Saturn could be gravitationally captured. On the other hand, if it became a star when the two were furthest apart ($15 \text { AU}$), there wouldn't be any trouble - at first. But once Saturn caught up to Jupiter in its orbit, it could get caught.

The other planets, too could be affected. I don't know just how many (if any) others would get captured by Jupiter; it depends on how close (or far) they are from the Sun. But the solar system would certainly be an interesting place. At least, more interesting than it already is.

This new Jupiter would not change the Sun's habitable zone much, nor would it create a substantially large habitable zone of its own. Keep in mind that M-dwarfs are really dim, and this particular dwarf would give off a fraction of a percent of the energy that the Sun does. To give an example of just how drastic this is, here's a model (code here) of a binary system of a Sun-like star and an M5V red dwarf (slightly hotter than our new stellar Jupiter): 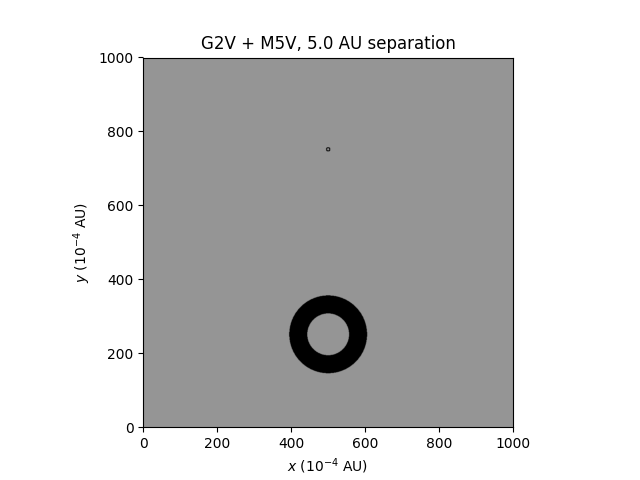 The separation is 5 AU, and the small dot in the upper half is the habitable zone around the dim star. The stellar Jupiter's habitable zone will be even smaller, and won't affect the rest of the Solar System, although some of its moons may be habitable - at least, the ones that haven't been torn apart by tidal forces.

Not the answer you're looking for? Browse other questions tagged planets solar-system stars .

2
Igniting Jupiter
13
Emulating a geocentric planetary system
18
What would the Universe be like if gravity was slightly stronger?

9
How do I design the solar transit of a hot Jupiter?
6
Replacing Jupiter with a brown dwarf?
6
Effects of Hot Jupiters on habitable planets
13
What is the theoretical maximum number of habitable planets in one solar system?
2
The major effects on the habitability of exomoons orbiting this Brown Dwarf
7
How soon does the Earth's surface re-solidify after the red-giant Sun is replaced with a different star?
3
Replacing Jupiter with a small star
3
Damarian's Parameters: What are they?