What can I do to make blood black?

In my world I find it simplest to have iron-based blood. The problem is that iron-based blood is red, and I want it to be black. Two things come to mind; one is making the blood denser, resulting in thicker, darker blood and fast bleeders. The other is making blood richer in iron, which leads to black blood, but the threat of heavy metal poisoning. I am not a expert so I don't know if those would even work. What can I do to make iron-based blood black, and what would the effects be on creatures' bodies?

If you look at the things required for a complete blood count, you're going to notice that there are things which are not red blood cells but are still "blood".

Simply introduce impurities into blood that change its color. As DoubleDouble has mentioned, a variety of skink has green blood because of toxins inside it.

Alternatively, this creature can simply have poorly functioning liver and kidneys, and the blackness comes from improperly broken-down red blood cells. Often in animals, black blood is simply old blood, or blood that has degraded and not been able to be filtered out. (See here, a site which focuses on women's health issues.)

Perhaps your creatures have evolved to have black blood, as it confers some advantage to them. Some advantages could be:

If you just want black blood because it would be cool ( and it would) have the blood become denser due to a much higher need for coagulation to stop bleeding.

You could also have a "black" blood cells that replaced the white blood cells in terms of what the white cells ( more info here: https://www.urmc.rochester.edu/encyclopedia/content.aspx?ContentTypeID=160&ContentID=35) do. It could be do to a disease factor as We (and I'm using the royal we) have cured all the diseases out there so evolution tried a survival of the fittest out and gave us a new disease (think Black Death) and our blood evolved to have stronger "white" blood cells that turned darker, causing the red iron blood to turn black. our scientists are not sure why yet but are working very hard find out.

Due to that fact, doctors can now tell immune-compromised children by how dark the blood is.

The color of your blood is related to the amount of oxygen attached to red blood cells.The lower the level of oxygen in the blood, the darker it gets. This offers a few options.

Blood doesn't have to be red. As others have stated, there are other colors that can occur in a creatures blood. 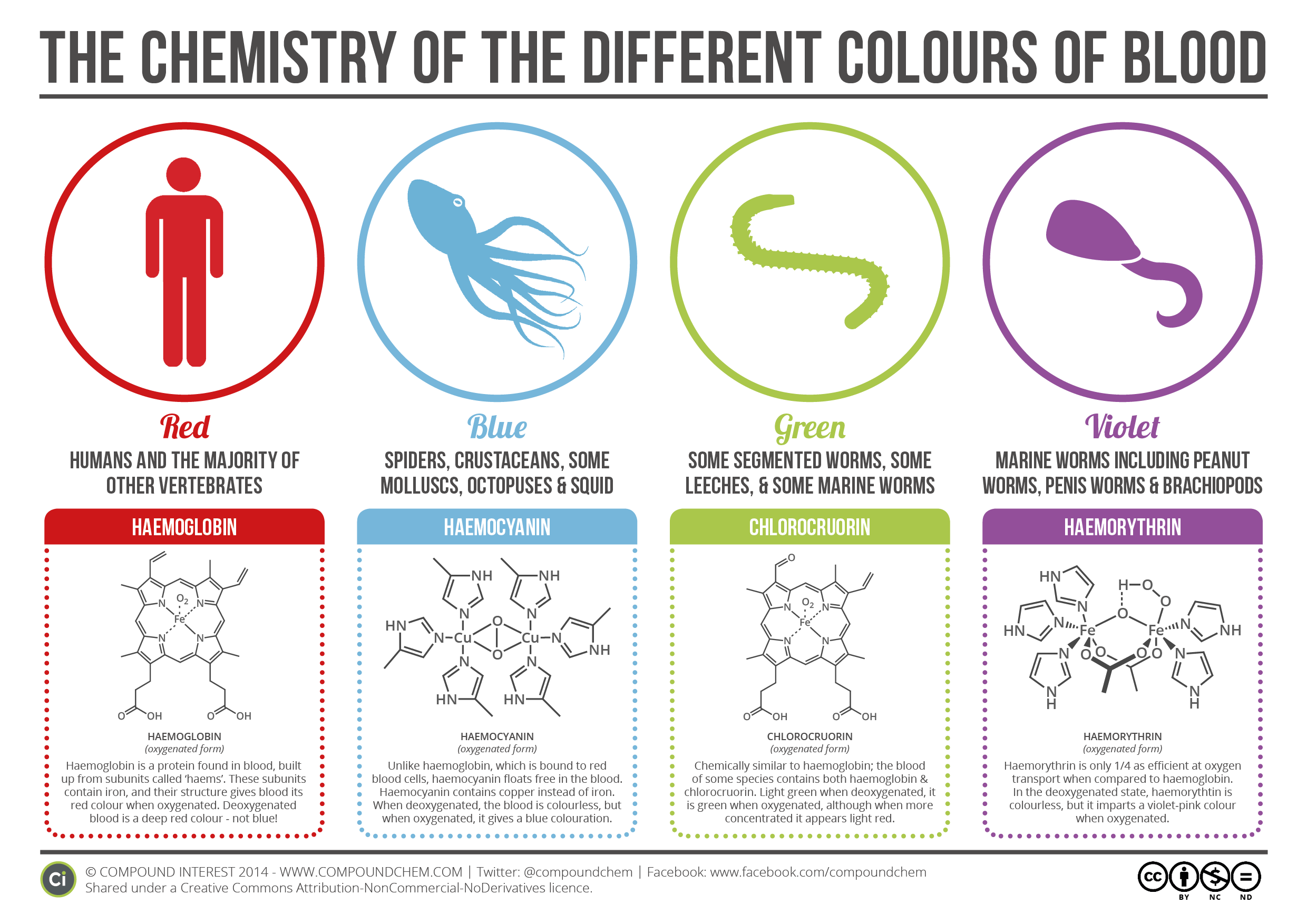 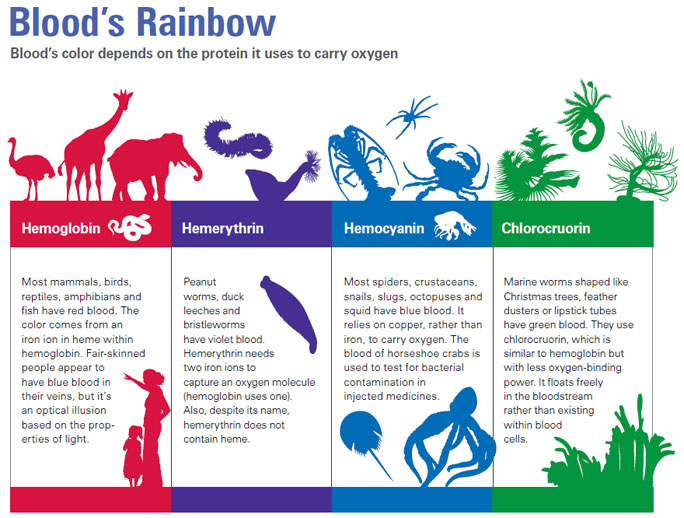 Copper ... This is something of a shot in the dark, but ...
Copper is involved in the process of creating new red blood cells, manufacturing collagen, healing wounds, and maintaining sheathes around nerves. Something that produces enough copper, either through the natural processes of the body, or through ingestion of copper rich foods and has developed a tolerance to much higher levels of copper in the body, it could be argued that would result in greater levels of red blood cells, allowing of lower quantities of oxygen to be carried by more cells, to where they need. I would imagine hyperchromia taking place as a result of increased hemoglobin attaching to a greater number of red blood cells.

Another option would be the presence of a second protein molecule to work alongside hemoglobin, but unfortunately the readily available example of Hemoglobin + Chlorocruorin would produce something closer to yellow, rather than black. Like when smashing some cockroaches.

Their blood needs to be iron based, but it doesn't need to be exactly the same as real human blood. You could include some kind of cell in the blood, a cell that we don't have, that causes it to turn black on contact with air or with colder temperatures. If you want it to be black all the time, (and I don't pretend to be an expert on this) you could try swapping out the hemoglobins (the protein that makes red blood cells iron based and red) for a different protein with a black pigment, but still an iron base.

Since all of my experience with in depth stuff like this and even with the word "hemoglobin" comes from Wikipedia this morning, don't take my word for this. It would probably not work.

In the Pern books (McCaffery, Anne), dragons and other beings have black blood due to Boron. Not sure of the science behind it. Fans of her books most likely will attribute using Boron as the reason as copying. If there are scientific reasons, then use it.

On the other hand, I have hemochromotosis which results in high levels of iron. I haven't seen any change in colour when my iron levels are too high. The treatment is withdrawing blood so extra is made to dilute my iron rich life blood. From this experience, I advise NOT explaining black blood being due to excessive iron.

Melanism is a genectic condition in animals that causes it to make melanin, the pigment in black skin and hair, in every cell within its body, including it's blood. If the expression is strong enough, even the blood can appear black.

One real life example is a breed of chicken from Indonesia: the feathers, skin, meat, bone and even eggs were black, and the chicken's blood is a very dark red due to the melanine content.

If your critter is sexually selected to look black, melanism can arise from genetics and spread out throughout the population, with the unplanned consequence of staining the critter's blood completely black, due to the strength of melanin gene expression.

Add a gas to the atmosphere

If it is just a REASON for it to be black so you can change the colour and keep your "Earth based life" data can you just add a gas to the atmosphere of your new world that reacts to the iron in the blood, as the lungs would include it in the oxygenation process. If the only effect of the gas was to change the blood from red to black it would not effect your "Earth based life" programming data.

Not the answer you're looking for? Browse other questions tagged science-based evolution creature-design blood or ask your own question.

56
Other blood colors
7
Would it be possible for my fantasy creature to have black blood?
7
Can long-term exposure to high-energy radiation without corresponding visible radiation induce melanism in a species?

4
Generating a magnetic field for planets with iron-cores that is revertable?
56
Other blood colors
18
Fire is gravity for fire Elemental
15
How far can blood spray?
3
How do I make a new and interesting type of “Zombie” creature?
10
What impact would copper-based blood (haemocyanin) have on a humanoid creature?
6
No Iron for your fair-folk maiden? (Part 1: alkaline)
10
What metals other than calcium can be used to create alien bones that won't also engender a human-toxic environment?