So here's what I'm trying to do.

I've got a setting that at a medieval level of technology and is rather similar to Europe with knights, castles and all that jazz. However to give the setting some character, I thought I replace the horse with a suitable dog based alternative that been breed to a suitable size and form for being a knights mount.

What would be the major differences to consider, as well as adaptations needed to get similar results in practice to horses?

Realistically, a well-trained backpacking dog can carry up to anywhere between 30% and 50% of its weight on its back. While the dog's spine is possibly going to be a problem, that can be worked around with a suitably designed mount, so isn't the showstopper. People regularly take dogs backpacking with large dogs carrying tens of kilograms with no real trouble. Well-conditioned sled dogs, especially in teams, can pull a lot more for each unit of weight of dog, but that isn't what you are asking about.

You mention knights mount, which makes me think of knights in armor and with weaponry. I imagine you'd be looking at at least 100 kg for something reasonably realistic there. Let's say these dogs are specifically bred for the purpose, and bred specifically for carrying ability; let's say they can carry something like 40% of their own weight on their backs, as an average.

Note that this establishes a lower bound. The 100 kg human is probably on the low end, and the 40% carrying ability is probably reasonably high (30% being a generally suggested target to aim for in backpacking with dogs), leading to the distinct possibility and indeed probability that the dogs would need to be yet larger. I'm going with 250 kg in this answer to have a single figure to work with, but realistically, you might be looking at the range 250 kg to 500 kg weight for these dogs, and would need to adjust everything below accordingly.

As a general rule of thumb, raw-fed dogs eat about 2% of their weight per day. Since high-energy dry dog food isn't available at a medieval level of technology, this is probably the closest readily comparable to what your dogs would need to eat. 2% of 250 kg is about 5 kg per day, but this could easily be anywhere from 3 kg to 10 kg, depending on the individual dog and the level of activity for the day.

Bowlturner mentioned hip dysplasia, and specifically how the incidence of hip dysplasia tends to go up with size, in the comments to Francine DeGrood Taylor's answer. While this is a valid consideration, it is also important to keep in mind that if you are breeding these dogs for riding, anything that inhibits their motion in any way is going to be an extremely serious fault. Even more so in an environment where resources are scarce; if these people have any understanding of how breeding for specific traits works, which it sounds like based on your question, they would absolutely not allow any such dog to breed. Breeding out hip and elbow dysplasia to the point that it isn't a major problem probably wouldn't be very difficult even in breeds that currently have a significant percentage of dysplasia, if we didn't have the bad taste of also breeding for many other traits. Also keep in mind here that breeding for "pure breeds" generally speaking is a very new phenomenon, dating back only to the late 1800s or so. Before then, breeding was purely for function: you wanted a guardian dog, a sheepdog, a sled dog, or something else, and you didn't particularly care what it looked like as long as it did its job (and the value of a dog was in how well it did its job). In some breeds this preference of function over form remains even today, and you don't need to look much farther than to working-bred sled dogs to find it in abundance. You may want to compare Why didn't Antarctic sled dogs have hip dysplasia? from the Institute of Canine Biology blog.

You possibly wouldn't want just one animal. Having a single one puts you at risk if something ever happens to it. If nothing else, you might want one animal that you are riding on, and another for carrying supplies. That would instantly double the amount of food needed for the animals. Even more so since in the comments you talk about "packs".

Instead of horses, which are herbivores, you are now dealing with dogs, which are basically carnivores. Not only are you going to have to be able to procure that amount of meat on a regular basis (that's on the order of a pig per week for two of these), you will also have the issue of the dogs' instincts to contend with. (Instincts can be controlled to some extent through breeding and training, but they will still be there, and a potentially pack-living carnivore large and strong enough to actually carry a human on its back isn't the kind of animal you'd want to meet!) Horses can simply be allowed to graze during calm periods, and are unlikely to cause significant trouble; doing the same with dogs, especially dogs of this size, probably wouldn't be very appreciated by the locals.

It's instructive to look at the size of pack-hunting carnivores. Consider for example hyenas (up to some 70-80 kg), wolves (30-80 kg), lions (females, being the primary hunters, at 120-130 kg) and so on. Even really big current-day dog breeds rarely top 100 kg (for examples, look to the Caucasian Shepherd, Anatolian Shepherds, or St. Bernards for some really big ones). Beyond the size needed for a group to take down the commonly available prey, growing larger comes at a significant cost for no real corresponding gain; it then becomes a better strategy to team up than to grow even larger.

You would have to come up with a situation where this cost on the people keeping these animals is less than the gain these animals would bring. In a medieval level of technology society, you are already looking at most people being at a subsistence level of existence. Knights might have it slightly easier for serving the King, but their resources are still going to be significantly limited.

Looking back to pigs, you would need something like 20 pigs per year per dog, just for feeding. Realistically, then, you need anywhere from 75 to 100 or so pigs per dog, just to ensure a consistent availability of food. And you need to bring these with you while you are travelling, because while dogs can go for some time without eating, they tend to get somewhat grumpy after a while -- which is a quality you absolutely would not want in abundance from the animal you are riding, and even more so from one that probably would be able to kill you right away with one bite if the thought crossed its mind that you are actually a big lump of meat, sitting conveniently nearby.

The reason horses can be used as mounts and not dogs is because the muscles of their back are not strong enough and their spines are not constructed to carry weight on top. It has nothing to do with size. There are Shetland ponies smaller than some dog breeds but if you tried to ride the dog the way you ride a pony, the dog will eventually suffer severe back damage.

Now, that being said, it doesn't seem unreasonable that people would be able to breed a dog with a spine capable of supporting more weight than a dog might normally be able to support. They might have to design a "saddle" that distributes the weight differently.

One other consideration; the larger a dog is, the shorter their lifespan. Dogs large enough to bear the weight of an armored knight might not live long enough to be trained to do so...

Just look at that noble beast 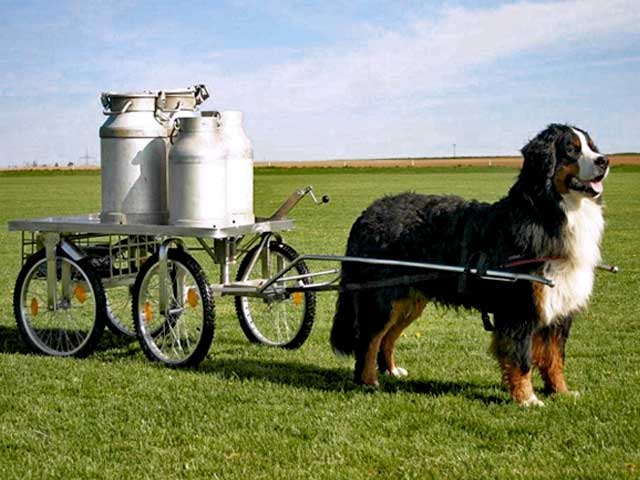 You might also be able to run them as a team 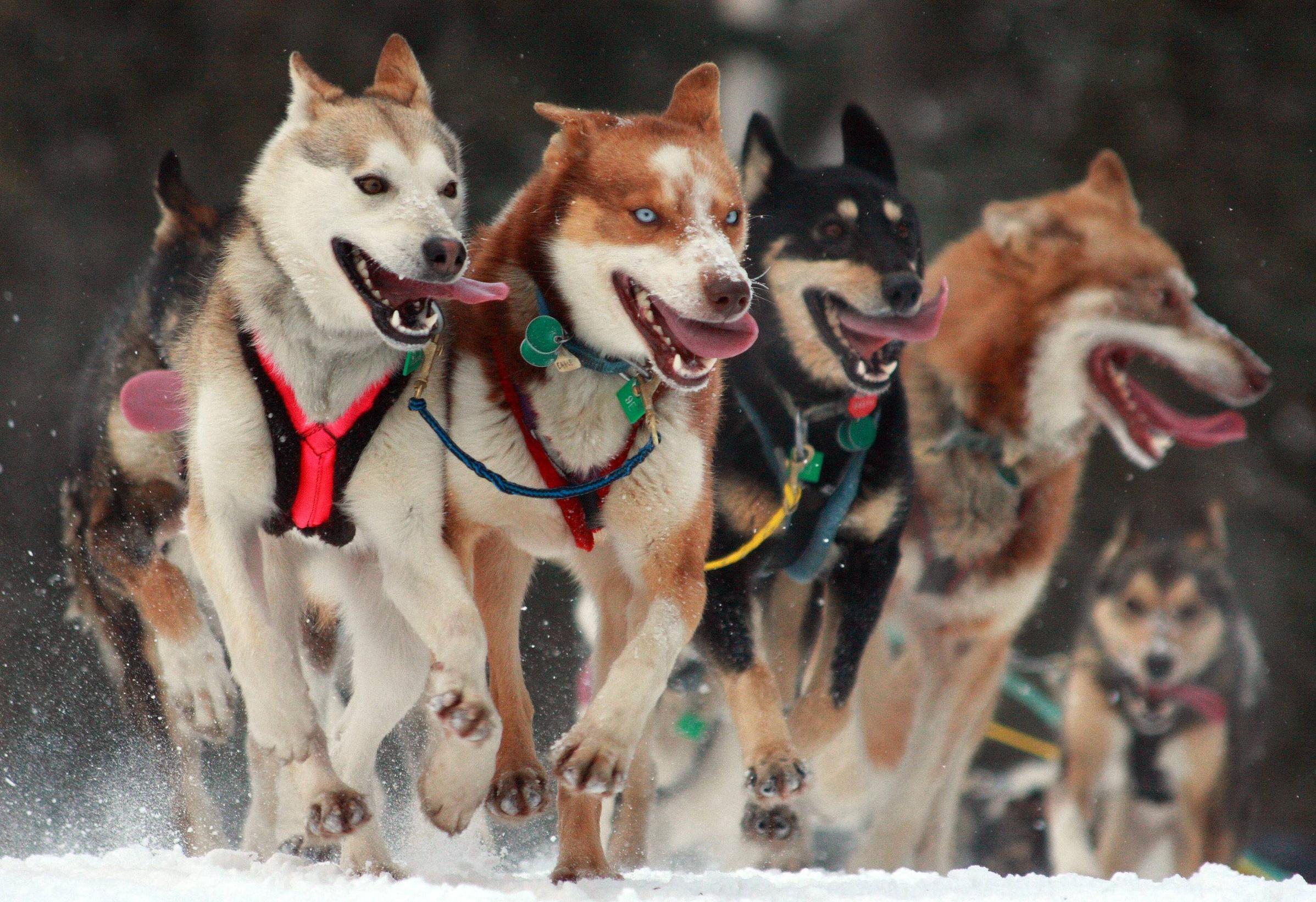 Rather than using them as pure mounts though, I'd consider the traditional dragoon. Rather than fighting mounted, a knight and his team of utility dogs would allow a knight to reach where he's needed swiftly, and dismount. The dog team, with appropriate harnesses could act as a force multiplier, harassing an enemy knight.

I distinctly remember reading a story where an unhorsed knight was protected by his faithful dog, who'd knock over or otherwise attack enemies who tried to take him hostage. A pack of dogs might even be able to knock over and maybe even sit on an enemy knight in full armour.

They might also be useful for digging fortifications of protecting encampments.

Size is useful for all these things.

65
How can humans coexist with an intelligent carnivorous species?
18
Is it possible to ride a carnivore species?
5
Dog Breeds used as Horses - Warfare Applications

4
How would human-sized colonial organisms develop
7
Flying Mammal Roughly The Size of A Large Dog
12
Feasibility of floating city-sized forests
10
Can a horse-sized flying creature grab and carry a human's weight while flying?
3
Effects of a watermelon going from grape sized to full sized in your stomach?
6
Realistic Zombie Virus
7
Plausibility of Tribe-Sized Megafauna
8
Is a planet sized creature possible?
7
How to make chocolate safe for Keidran? (Basically Dog-people)