What would happen if an earthlike planet is eclipsed by another planet for a few hours or days? [closed]

Heres a simple diagram of the proposed orbit of both planets: 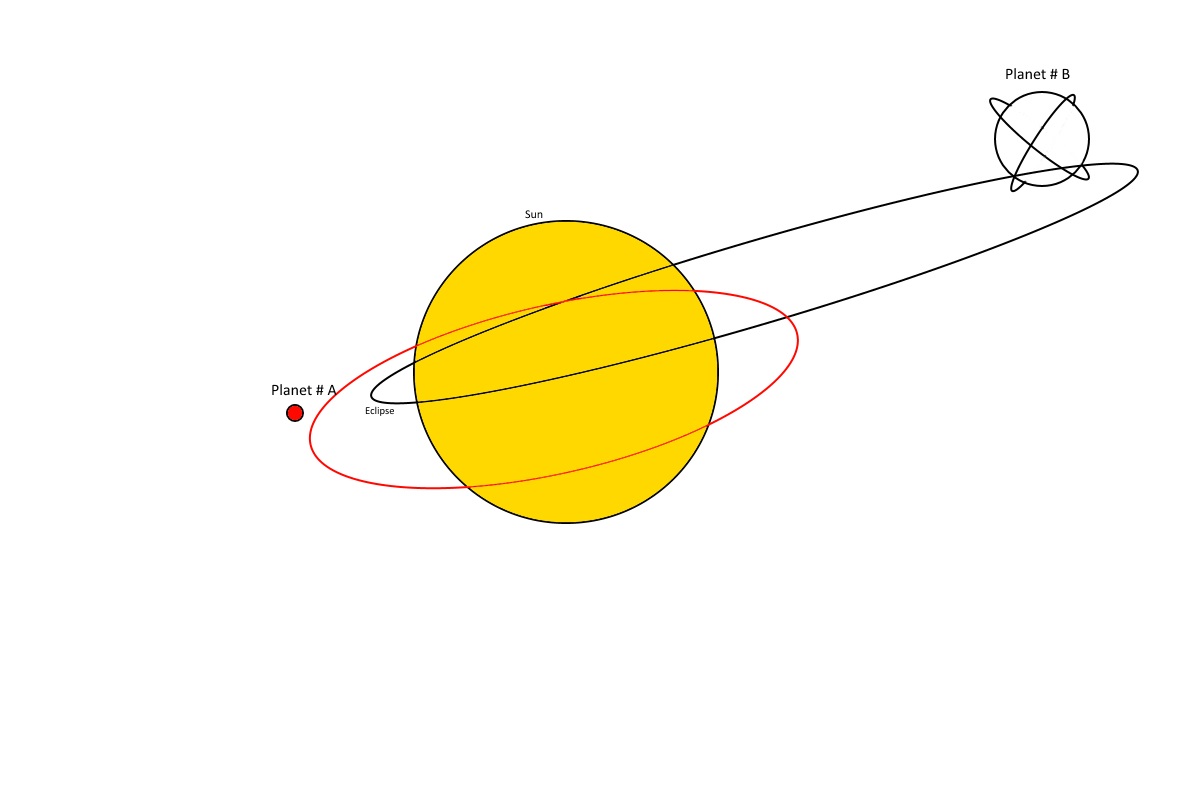 Thanks for all the answers. You've me helped immensely.

If planet B approached your Earth like planet A to the point that B's apparent diameter was the same as, or larger than the apparent diameter of the primary star, it would be close enough to cause gravitational interaction with A.

Occluding the star for three days would cause sharp global temperature drops, which would in turn cause global weather, like storms and hurricanes. Lots of snow would fall, changing the albedo of some areas and possibly causing temperature effects that would last for years. It might even trigger a mini ice age each time.

Large bodies of water won't change temperature much. They hold an amazing amount of heat. But surface waters will freeze. This means that ponds and small lakes will freeze over, large lakes and even sea shores will freeze to some extent.

All in all, I don't think it would destroy life on A. Earth has certainly endured worse. If there's a technological civilization, they're likely to be prepared for it.

If B is fairly small, the gravity effect would probably be that B would either become a moon of A or just smack into it. If it was moving fast enough, the net result might be that both A and B's orbit would change. But if it's moving that fast, it's not likely to hang around for days or even hours.If B is fairly large then either it will suck up A or A will become a moon of B. Another possibility would be that A's orbit will change, making life there either more difficult or impossible. I suppose it's possible that it might shift A to an even more temperate orbit.

Another possibility could be that A is already a moon of B with an orbit so highly inclined that it rarely passes through B's shadow. Depending on its orbit, it might dip into the penumbra occasionally, and once in a millennium or so, pass directly behind B. Having this period last hours or days sounds pretty reasonable. It would mean that A's orbit was wide enough to keep it from being heavily affected by B's tidal forces and magnetosphere.

Have you ever seen the movie "Pitch Black"? The story takes place on a moon of a gas giant. It has constant daylight moon wide for 22 years then an extended period of darkness. This scenario required more than one local star, though.

It would get dark.

But really, it wouldn't be all that different from your typical solar eclipse. Keep in mind that to cast the whole planet into darkness, your shadow-casting planet has to be either REALLY big or REALLY close. It must be larger than the earthlike planet, and have an angular diameter greater than the star. The orbital mechanics of keeping everything in syzygy for several days would be rather tricky as well.

Not necessarily. It really depends on the interval of the eclipse, the area of umbra and penumbra and the extent of water bodies on the home planet (the target of eclipse).

It happens that water bodies (oceans, seas) hold a large amount of heat energy which they would slowly release in case the primary heat source (sun) is blocked out. That's what happens during night when sea breezes blow.

The next thing is the extent of eclipse. If you have an eclipse over half of the planet's bright side that lasts for days, there will probably be some strong gales and storms due to the temperature difference between the bright and dark spots on the daylight side.

Once the seas have finished their stored energy reserve and fallen below freezing point, you are in for an ice age that would at least last for a few months. I can't say if it will wipe out life entirely from the planet, but it won't be a pleasant place to live on!

Not the answer you're looking for? Browse other questions tagged science-based internal-consistency planets space .

7
What will happen after I use a light swich to turn off the Sun?

4
Seasons on a circumbinary planet
6
What astronomical considerations are necessary for the planet in this model to possibly be Earth-like?
6
Two orbits, Four habitable planets in the goldilocks zone?
5
What would the temperature variation be on this planet? (High eccentricity & slow rotation)
6
How To Make an Earth with 27 Suns Work, Attempt Two: Orbital Stability
9
If the Earth was part of an ultimate solar system, what would the sky look like?
6
How bright is the night with 18-22 AU distant star?
5
TImeline of Rogue Earth
14
Could We See a Lagrange Giant in the Sky?