How would red eyes occur in a human (without underlying medical conditions)?

The main character in my setting is a human with red irises. I know that severe cases of albinism can cause somebody's eyes to appear red, but that's actually caused by light reflecting off the blood vessels in the retina. I've also heard that Harlequin-type ichthyosis can cause red eyes, but I'm not 100% sure about that, and the skin problems there aren't going to work.

What I really want is for him to look ordinary and be reasonably healthy, except for the fact that his irises are definitely red. So, how would this occur, and how would it be diagnosed with WW1-era medicine or technology?

Probably through the production or consumption of biological pigments.

I doubt that the genes responsible for melanin production in humans, and therefore eye color, could easily mutate to produce a red pigment. You would need to postulate an entirely different gene. That is to say, we are in the world of speculative fiction here, not realistic human biology.

However, that said, there are various possibilities. One of the most common classes of red pigments in nature is a group know as the carotenoids. These are quite common; however, very few animals are capable of synthesizing them. Most animals that use these as coloring must first consume them, whether in plant or animal form. So someone using this method would have to eat a lot of carrots. There are some other types of red-orange pigments that most likely do not require dietary pigment intake, for instance the psittacofulvins of parrots.

Either of these pigment classes could give a human red eyes, if they had the appropriate genes. However, carotenoids are probably a superior method. The only real red-eyed species of which I am aware are amphibians (frogs in particular). One of the most extreme is of course Agalychnis callidryas, shown below. It is very likely that the red-pigmentation is due to carotenoids, since other frogs use carotenoids to color their skin, at the very least. Note that the tree frog does not have red skin, so skin and eye pigment production are clearly somewhat separate. 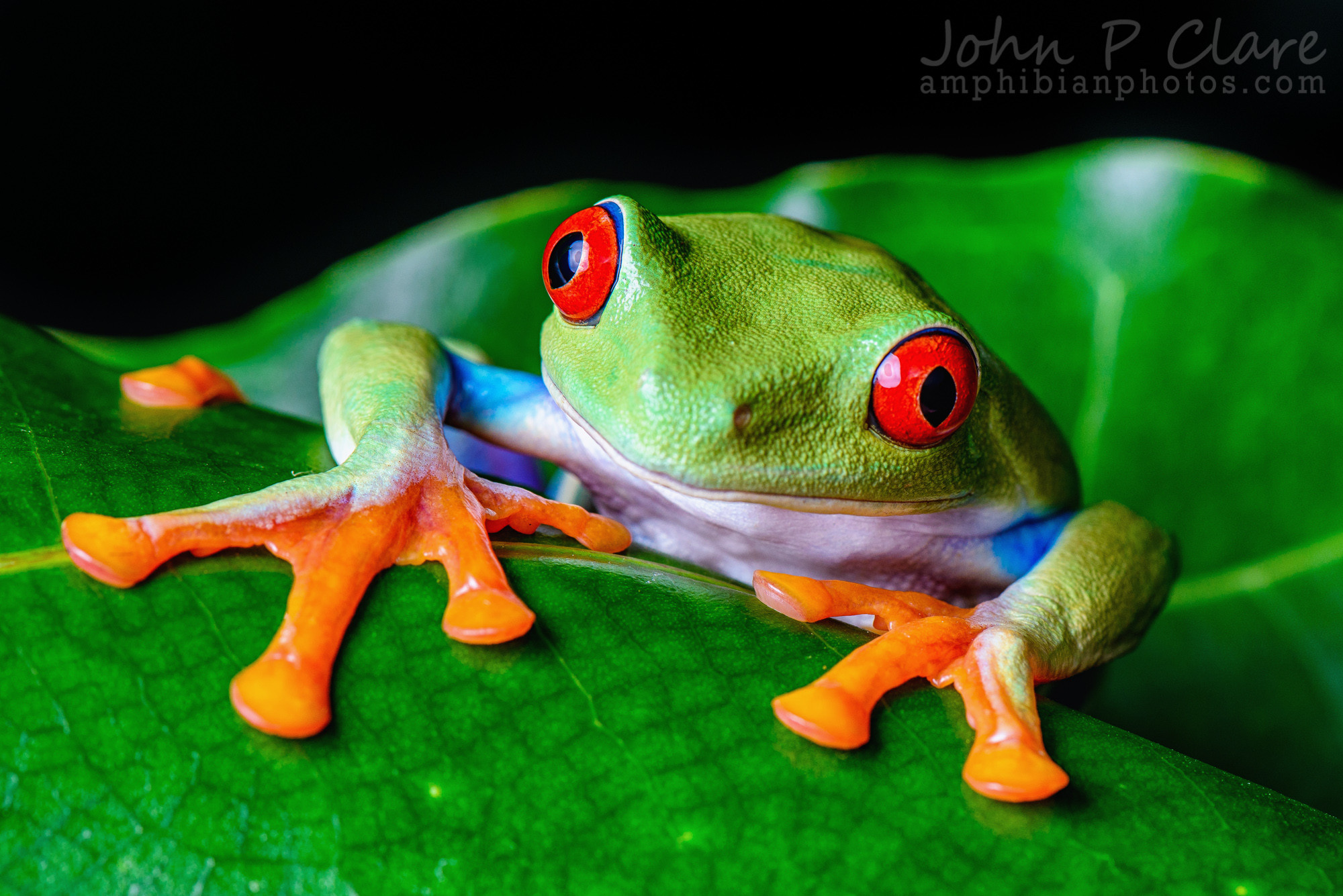 So there are definitely proteins in nature that can be used to color eyes red, with at least one probable proof-of-concept in the carotenoids. I don't think typical baseline-human mutations will cover it, though.

How would it be diagnosed?

Well, removing the person's eyes and subjecting them to chemical tests might allow determination of the pigment with 1910s technology. Obviously, this would not happen. The genetic basis of inheritance was already well-established by then, and indeed the nature of chromosomes as gene carriers was known. Without detailed knowledge of biochemistry, all that the physicians could determine would be that it was congenital. In reality, of course, even the pigment could not be determined, since the very best optical microscopes have a resolution of perhaps 200 nm, and electron microscopy would have to wait until the 1930s at the earliest. Something like beta-carotene is 1.9 nm in length. That is something of a long molecule. So without taking out the eyes, there would little chance of figuring out that carotenoids were involved. Probably the diagnosis would just be "idiopathic ocular pigment production" or something like that.

The easiest way would be to mutate the genes controlling melanin and its disposition so that pheomelanin is deposited into the iris instead of eumelanin.

I'm not sure of the organic chemistry it would take to make such a thing but there are definitely red pigments in the animal kingdom that could be used. You'll need to be careful though since the same gene the codes for melanin in the skin may code for melanin in the eye though you could claim heterochromia iridium and it would work.

Firstly, everyone who saw this red eyed person would think they were possessed (with no change in attitude to modern times). Since DNA wasn't discovered as the cause of heritable traits till the mid 1940s, scientists and doctors wouldn't have any way of diagnosing the problem. If there are no phenotypical characteristics besides red irises, the doctors may just ask the patient to wear sunglasses all the time. Other than being creepy as hell, there isn't anything else wrong with the patient so they should be released.

Not the answer you're looking for? Browse other questions tagged biology humans .

7
Melanin and you
6
How could a race of humanoids have grey skin?
2
Is there psychological reason to design a red eyed creature?

48
If accelerated natural healing were to occur, what would happen to the human body?
3
How would glowing red or purple eyes occur in a human?
45
How many people would have to be killed to make the streets 'run red with blood'?
7
How much would a 3" human male weigh?
11
How to evolve human-like eyes that can stare at the sun without protection?
8
How would a 4th trimester affect human development?
2
What extra organs/organ modification a human would need to be able to sustain itself without food or sleep?
5
How much weight can a human wear without tipping over?