How to justify having overly large irises?

In many famous alien species you see that the iris is so large that it almost appears that it replaces the sclera. What evolutionary history would support the irises growing to that size. The only two requirements of the species are that they need to be humanoid and evolved in jungles.

For the record I am looking for answers other than the typical, "Obviously sexual selection is the answer."

Perhaps in these species, the iris is an important way to recognize individuals, and evolutionary pressure has made it crucial to be able to.

(I know, this is similar to "sexual selection", but with a different end: in-group / out-group distinctions, rather than attraction.)

Basically, a race would evolve large irises if they were advantageous to survival. One reason animals like cats and dogs have large irises is to be able to adjust their pupil size to a wide range of light levels including levels that humans can't reliably see at. Coupled with high rod cell density at the expense of reduced cone count (most of these animals are dichromates or monochromates), animals in the real world with large irises can reliably make out detail in very low-light situations, allowing them to find food and/or avoid predators.

Case in point, your race evolved in a jungle environment. Earth jungles are so thick with foliage in most places that sunlight doesn't reach the forest floor even in midday, but at the same time there are clearings where the midday sun would be bright, maybe brighter than our own sun. An animal or sentient race that evolved to survive in this environment has to be able to adjust quickly to these varying light levels, or he's blind in a large part of his habitat, and blind means dead.

A humanoid race that evolved to be "crepuscular" (most active during twilight hours) would be the most prone to develop such a trait as the light levels vary the most in this time, and this is an easy backstory along the lines of the race having evolved in a region of the planet that gets slightly too hot to be diurnal (similar to sub-Saharan Africa but wetter), but a nocturnal apex predator preyed on the race's evolutionary ancestors, so the race developed a schedule of being out and about during the fringe hours of the predator species' activity cycle, and being sheltered but awake during the night (to keep watch) and sleeping during the day.

You don't need a reason.

It is theorized that the reason why human eyes look the way they do (wide, very white sclera, and a colorful iris) is that it allows others to easily see what we're looking at, and pick up on small non-verbal cues.

We have this theory because other primates look the way you describe: big black irises, and dark sclera. Just copy human evolution, but take away the social element. Since moving away from the jungles to the plains was a big part of our social evolution, I'd say that humanoids evolving in jungles may well have the kind of eyes you describe. From the wikipedia article:

Studies of great ape behavior show that they are good at cooperating in situations where there is no potential of deception, but behave egotistically in situations where there are motives for deception, suggesting that their "lack of cooperativeness" is not a lack of a cognitive ability at all, but rather a necessary adaptation to a society full of deception.[7][verification needed] This suggests that human cooperativeness began when proto-humans began to successfully avoid competition, which is also supported by the fact that the oldest evidence of care for the long-term sick and disabled are from shortly after the first emigration of hominins out of Africa about 1.8 million years ago.[8][verification needed] 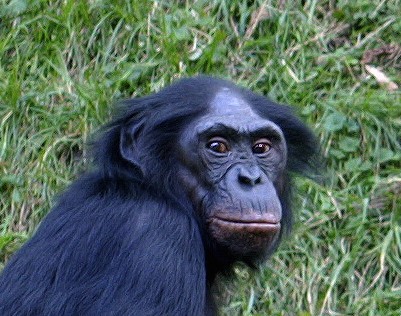 As an aside, this is probably also the reason for large irises as a trope. It makes emotion harder to read, so it looks freaky and untrustworthy to us.

The iris' primary function is to regulate the size of the pupil, thereby controlling the amount of light entering the eye. I don't see any reason why it couldn't be much larger than our irises tend to be.

On a related note, humans are somewhat unique in that our sclera (the "white" of the eye) is easily visible and stands out in contrast to the darker iris. This appears to be an evolutionary development related to the kind of cooperative efforts necessary for human society to thrive.

In short, we have smallish, dark irises and large, white scleras because it allows us to determine where other people are looking, without having to ask or rely on observing the other person's head movements. Studies have shown that infant humans tend to follow eye direction without additional head movement more often than they follow head movement, with or without eye movement. Other primates, however, ignore movements of the eyes alone, but do follow head movements.

So your alien species can have huge irises and hidden scleras as long as they don't need to follow subtle eye movements which are not accompanied by head movements.

In addition the capturing more photons (useful in low-light situations), a larger iris could also help in resolving smaller details. This could help someone to look at smaller things at close range (like having a microscope for eyes!) or make out details at a distance (a bit like a telescope).

The reason is that there is a limit to the detail that can be seen based on the size of the aperture (the iris of the eye in this case) and the wavelength of the light. The human eye is currently very close to this "diffraction limit" and so to make it better, the iris would need to be larger.

Also, as MichaelS suggests, longer wavelength photons would require larger irises to achieve the resolution that we are accustomed to. For example, if we want to see body heat, then we would want to see light at a wavelength of ~10 micrometers. This is ~20x larger than typical visible light at ~0.5 micrometers. This means that the numerical aperture (and within a small-angle approximation, the iris diameter) would need to be 20x larger, which would look very strange!

Infrared vision would likely require larger eyeballs. A larger pupil to allow more of the larger photons to hit a larger retina could be beneficial.

Source is an old article I read about "real" D&D infravision which may or may not be entirely accurate. And my memory may be a bit fuzzy.

Combined with KeithS's answer, this would allow exceptional night vision.

Not the answer you're looking for? Browse other questions tagged reality-check evolution creature-design or ask your own question.

38
How would multi-race humanoid evolution happen?
13
What evolutionary factors can contribute to large sexual dimorphism in large mammals?
3
What needs to be different in order for a parthenogenetically reproducing species to evolve sentience?
9
Method to share genetics beyond traditional sexual reproduction
4
How to realistically increase hair growth rate
3
How does an Alien world have Earthlike creatures?
29
What qualities could a hominid evolve to make it a better farmer?
4
What are the most realistic ways to introduce a persistant cosmetic difference into human evolution?