What are the advantages of a coilgun v.s. a railgun?

I want to know the pros and cons of hand held rail guns versus coil guns. They will be given to infantry who can easily lift the weapons. If need be they could have twice the strength of a normal human via cybernetic enhancements. What would be the various pros and cons, especially in rough terrain?

In short (links to follow as I find time to put them in).

Have a higher max projectile velocity. Powerful switches alternate the electromagnetic poles in the drive coils as the projectile passes through the coils. This requires high voltage, high amperage, high speed electrical switches. Researchers have been trying to build these for decades with only moderate success.

is a type of projectile accelerator consisting of one or more coils used as electromagnets in the configuration of a linear motor that accelerate a ferromagnetic or conducting projectile to high velocity.1 In almost all coilgun configurations, the coils and the gun barrel are arranged on a common axis.

Coilguns generally consist of one or more coils arranged along a barrel, so the path of the accelerating projectile lies along the central axis of the coils. The coils are switched on and off in a precisely timed sequence, causing the projectile to be accelerated quickly along the barrel via magnetic forces. Coilguns are distinct from railguns, as the direction of acceleration in a railgun is at right angles to the central axis of the current loop formed by the conducting rails. In addition, railguns usually require the use of sliding contacts to pass a large current through the projectile or sabot but coilguns do not necessarily require sliding contacts.2 Whilst some simple coilgun concepts can use ferromagnetic projectiles or even permanent magnet projectiles, most designs for high velocities actually incorporate a coupled coil as part of the projectile.

The force the projectile leaves on the weapon is it attempts to compress the coils (you'd get recoil similar to a normal weapon).

Magnetic fields are not inherently dangerous to people as long as they don't have magnetic metals on their person. Other than the difficulties with switches, a coil gun is much more suitable for use by unprotected humans (e.g. infantry):

Are much easier to build from a technological perspective. Current runs down one "rail" through the conductive base of the projectile and back up the other rail. This is the brute force method of electromagnetic projectiles.

A railgun is an electrically powered electromagnetic projectile launcher based on similar principles to the homopolar motor. A railgun comprises a pair of parallel conducting rails, along which a sliding armature is accelerated by the electromagnetic effects of a current that flows down one rail, into the armature and then back along the other rail.

The forces applied to the railgun try to rip the rails apart. The recoil from the projectile also supplies a recoil like a chemical slug thrower.

Each rail conducts high voltage and amperage current. Touching or getting close to one of the rails would be exceedingly dangerous. This weapon is probably not suitable for infantry use.

One advantage of a rail gun would be if you ran out of loads but still had power you could just jam the rails against and enemy and pull the trigger. The impedance would be higher, causing the voltage between the rails to be higher.

While using rail or coil guns as infantry small arms is problematic (due to the various issues already discussed), there may be a place for railguns as a man portable anti tank weapon.

Current ATGM's generally use shaped charge warheads to actually penetrate the armour (the rocket motor just gets it there), and various techniques have been developed since WWII to defeat these types of warheads, including spaced armour (such as the "cages" around modern tanks), explosive reactive armour (the brick like devices attached to the outside of most Russian tanks) and even counter missiles like the Russian "Arena" or Israeli "Trophy" systems. Hypervelocity "darts" (Armour Piercing Discarding Sabot Fin Stabilized; APDSFS) fired from tank cannon are much harder to defeat, and using current or near term technology the only practical means of defeating such rounds is plates of high strength and density armour.

A tank cannon is a huge piece of equipment, firing large 120mm rounds and having massive recoil, so you need the tank to carry it around and use it effectively.

A man portable railgun would resemble a recoilless cannon: 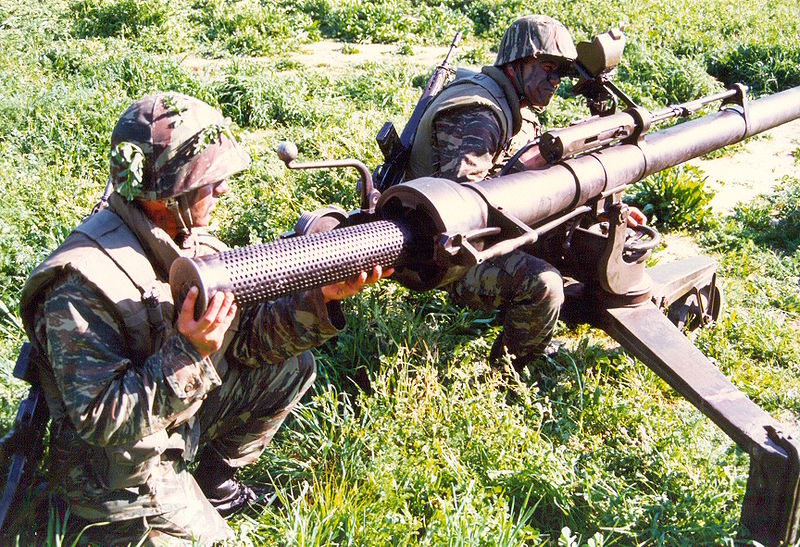 The propellant charge would not be used to drive the round, but rather energize a MHD generator with the jet of high velocity gas exiting the venturi, while the long barrel will house the rails which actually drive the projectile. The actual projectile can be rather small and relatively light, since the damage is delivered in the form of kinetic energy. A small projectile moving fast enough could conceptually be able to engage helicopters and aircraft as well, although a very advanced sighting system and mount capable of rapid movement of the weapon will be needed.

The downside of this weapon will be much like regular recoilless cannon: the jet of the driving charge (in this case driving the MHD generator) will certainly alert any enemy of where you are, and you will need to leave immediately after firing.

Still, this would allow light infantry to be able to take on tanks on a more equal basis, as well as defeat most types of fortification (blasting through bunkers and buildings with relative ease), so something along these lines may be considered as the technology of railguns matures.

They both differ from conventional weapons in that they use electromagnetism to propel the projectile rather than using an explosive charge. Both of them need incredible amounts of energy, which is why they are not practical in an infantry weapon at the moment. The gun barrel and mechanisms do not need to be massively heavy, the problem is supplying the power.

The advantages of rail guns is that they are much simpler to build and operate than a coil gun. They are also more powerful as they have a direct contact between the projectile and the rails while the coil gun has a gap between them.

The advantage of a coil gun though is that the coils can be insulated from the outside world more easily, which could well make them more reliable in the long run. It will be harder for external conditions to interfere with the coils and the coils will take less wear and tear in use. Rail gun rails in particular are subject to a lot of wear even from normal use.

Railgun for one they can fire faster because the rails do not need to be deactivated. Also, with a coilgun you need capacitors which can fry easy. So railgun is my preferred choice.

Not the answer you're looking for? Browse other questions tagged weapons railguns coilguns .

6
Is there any advantage in a railgun/coilgun having multiple barrels?
18
Handling recoil of hand-held railguns
1
Handheld Weapons: Gas Expansion vs Coil Guns
10
Best material and shape for small-arms railgun/coilgun amunition?
9
Plausability of combustion light-gas guns replacing conventional guns in the future?
4
Why are my soldiers weapons so ineffective, or the rarity of one-hit kills
1
Maximum railgun and coilgun dimensions for space craft