I would like a levitating temple on a mountain. Hand-wave free...ish

I have an idea for a location in my world that I would like explained by natural phenomena rather than magic if at all possible.

Building on @oxide7's answer regarding magnetism, you might consider quantum locking. Quantum locking is a hard-science phenomenon in which a superconducting material can be "locked" in place in a magnetic field, even against a gravitational force. Search for quantum locking on YouTube for some really neat videos of the phenomenon. Of course, there are some drawbacks.

With a few conservative additions to current science, I think that quantum locking does what you want.

For the next part, assume that your temple is $40\times20\times 10$ feet with $1$ foot think walls and ceiling. This comes to 1834 cubic feet, or 51.93 cubic meters. Assuming that you may want a spire, columns, or some other type of decorative stonework, and ground for it to sit on, I will almost double this to 100 cubic meters. At a density of 2600 kilograms per cubic meter of granite, we get 260,000 kilograms of granite. Multiplying by gravitational acceleration, we arrive at about 2.5 million newtons of force. To put this in perspective, this is about one fourteenth the force provided by the principle stage of a Saturn V rocket.

Turn the Hindenburg on its end and put it in the attic. Shape the outside of the attic in some visually impressive way, like maybe a church steeple. Hang the gathering place underneath. For the walls, hang thin stone cladding onto an aluminum skeleton.

The temple could be the terminus of a space elevator. These don't need to be anchored to the ground: their centre of gravity is in a geosynchronous orbit and the cable is basically just hanging down from that. The cable stretching up from the temple roof and disappearing into the heavens might be seen as proof of the temple's divine greatness. An actual elevator car coming up and down the cable from the temple would probably add to this, and citizens who had been generous at collection plate time could maybe get a ride in it.

Let's start with the mass. The temple should be made of stone, you say. The lightest stone as far as I know is Pumice. The stone in the image on the Wikipedia page has, according to the caption, a density of $0.25~\mathrm{g}/\mathrm{cm}^3$. Since I can't fine a more general statement about the density (apart from "it floats on water") I'll assume that this is a typical density, and use it in the following calculations.

Unfortunately I cannot find much about the other properties, so I can only guess on how thick the walls would have to be. I'll assume 25 cm, which is a normal thickness for an outer wall. I have no idea what a normal thickness for the roof would be, so I'll assume the same there; the floor plate (the "land") should probably be twice as thick to carry the load. But note that this is just a guess. I'll just calculate with a flat roof, although the temple will probably have a non-flat roof.

So putting all the numbers in, I get:

Now the density of air is $1.225~\mathrm{kg}/{m}^3$, so the lower bound of the volume you'd need to get enough buoyancy (namely, if you could just use pressured vacuum, which of course doesn't exist) would be about $204\,000~\mathrm m^3$. For comparison, your temple itself has a volume of $216~\mathrm m^3$. So you'd need about 244 times the volume of your temple to create enough buoyancy (in reality more since even the lightest gas is considerably heavier than the imaginary pressured vacuum, and thus provides less buoyancy).

So unless you could live with a gigantic balloon on top of your temple, buoyancy is out of the question, even if you manage to get the mass down to a tenth of what I calculated.

So what else could we use to create the gigantic force? Well the strongest force in the universe is the electromagnetic one. So let's see if we can do with that.

The first idea would be that the floor and the temple contain electric charges, so they repell each other. You'd need to perfectly insulate both charges (especially the one in the floor) so they don't simply flow away. Now, how much charge would you need?

So what remains is magnetic forces. Unfortunately I don't know how to assess if this would give a reasonable force without unreasonable assumptions.

You could have the land and the temple be built out of some magnetic material that doesn't weight too much.

The magnetic field of the world could be out of whack from an oddly spinning core, or binary cores or anything strange like that. This temple probably wouldn't be the only odd phenomena tho. The ground the temple hovers over could simply be pole reversed magnetic material also. Electromagnets could be a thing too, but this would be deliberate.

You could have the temple be levitated by heat trapped underneath a specifically shaped land under the temple. The temple could be above some fault with heat vents.

The temple could be made of a material that is very light, and strong and also somehow infused with lighter than air particles like hydrogen or helium.

The temple could be in certain area with massive updrafts and the temple was built to specifically take advantage of this and remain "neutrally buoyant".

Or the temple is simply built with such perfect craftsmanship that the normal wind in the area (it's a bit windy to maintain the effect) that the temple levitates because of it.

I have more idea if none of these are any good. With magic I can give you another dozen at least.

Centuries earlier, your natives found an interesting, porous material (like limestone but way more porous) that was extremely rare, so they used it to build a temple and clad it with decor. The interesting thing about this rare material is that there is a rare bug like a non-damaging termite that loves to inhabit it, and only it.

The bug has a unique characteristic. As it ages, and it consumes energy or other bugs, it has a bladder that expands with a lighter-than-air gas. As the colony grew, the temple began to lift.

This was an amazing miracle. Over the years, when the colony of bugs got "full" in the all of the building material, the temple had lifted about a meter in the air! It lowers ~ 1m depending on the number of worshipers in it, finally touching the ground at about 40 to 50 people.

Luckily, this ancient temple had dense trees that grew around it as it gradually lifted over time. The tree branches help gently keep the temple from drifting away and help protect it against high winds.

Magnetic levitation requires no power and can lift a large amount of weight if you use enough magnets or strong enough magnets. The problem with static magnetic fields is that it is unstable, the building will try and spin around so north and south poles from the base and building are next to each other and then drop.

The chain on the building though would actually be to stop it spinning, not to stop it flying into the air. It would work rather like toys such as this one: 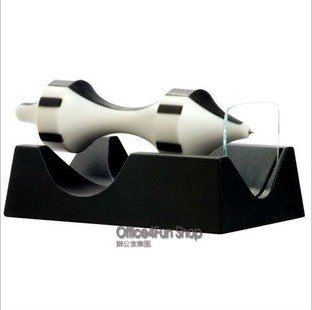 In this case the plate at the end and shape of the spindle stop it from spinning around or moving sideways. The same could be achieved with a chain though.

The likelihood of finding a natural place like that is slim. Magic might reshape the landscape and shape the stone foundation. Getting onto the slab will be tricky, considering the wind speed all around.

The temple and its platform/land will be chained down to the earth so it doesn't fly away.

That makes it easy. The chains appear to be holding it down but in actual fact, they are holding it up. All you have to do is weld the links together and make the chains into solid struts.

9
How much destruction could be wrought with the chemical and atomic energies in 30,000 humanoid bodies?
2
Power Armoring the Marines against blasts
12
Shatoum: The Granite Citadel
4
Floating cities with a new superconductor
12
How might my sea dwelling civilization defend against land-dwellers?
28
How could medieval ships protect themselves from giant mermaids?
3
How would giant mermaids wage raids/warfare against ships?
6
Could giant mermaids domesticate baleen whales?