What are some major architectural designs that would be in spaceships for flighted beings?

I am wondering what are some of the major concerns/designs an intelligent flying species would have in designing a starship? Generally we consider space to be a premium and crew living space is almost an afterthought. I think Creatures with flight might have a lot more trouble with wings that would have to act more like arms since flight would be awkward in zero-g and likely much more dangerous since their bones would likely be hollow as well.

Size of the Ship: I am more interested in medium to larger size ships, but ones without 'Gravity fields'. Known gravity generation only. ie spinning a ship. Maybe start with something like the ISS. And going larger from there. What are things to that would go into the design? I believe that the space station has a lower air pressure? but higher O2 content? Would that make a difference?

I added a picture of a winged/flighted alien from Star Trek the animated series to use as a starting point for the physical design of the alien I'm thinking about. 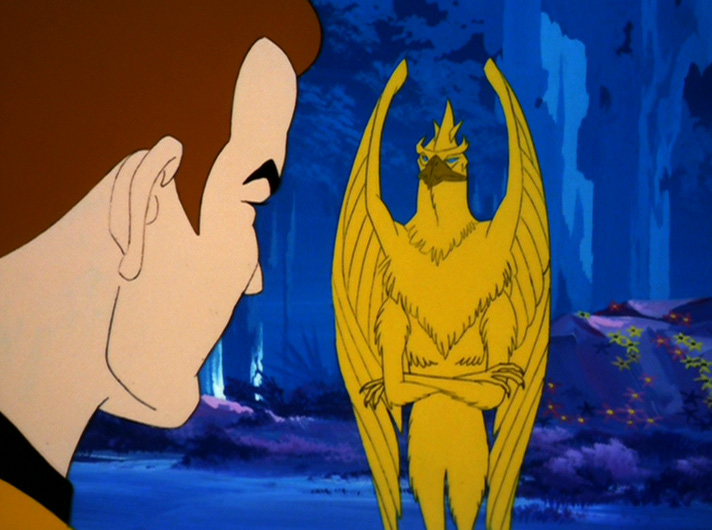 Exercise and muscle atrophy: they probably don't need an air tunnel to exercise their wings. They can use appropriate exercise equipment. They could stretch their wings out in a long compartment that they already have, out to the ends of a cylinder of sorts.

Your seats, harnesses, and other safety equipment would have to protect wings along with everything else. This could be awkward, since there is much less to lay against without lying atop the wings themselves. G suits might need to account for wings as well, if they start pulling G forces during any kind of acceleration, and if blood might pool in the extremities (I think human G suits go up to the torso, but I don't know). Protecting feathers and hollow bones would probably be more complex and more important.

Wings might be used to assist with controls or other functions. They might not use joysticks, for example.

Because of the square cube law, the intelligent winged creatures would probably be either from a lower gravity planet or they would be smaller than humans (or a bit of both). This would have implications for how much space is needed, how much artificial gravity is needed, and the supplies (such as food) that they need. So, the overall payload might be slightly smaller.

Since the avian species is accustomed to seeing and observing in more directions, they might prefer a wider field of vision while piloting, even if it involves screens or VR goggles.

Ironically I think that architecture gets simpler in this case.

Planet-side architecture would obviously be different for a species that could fly, but in space the need for such changes doesn't exist as anyone could "fly" so to speak with the lack of gravity.

Where on earth wings provide mobility in space they would not...or rather they would be mostly unnecessary.

Unless these avian humanoids have significantly improved ship design is is likely that you are still going to be dealing with cramped spaces, which actually make wings more of a liability.

So get to the point what changes would be needed...

Well very few. Odds are you would need slightly larger compartments and connections, wings to support humanoid flight would be massive and you would have to allow for more space just to move around, even if they never open their wings.

Beyond that not many changes would be necessary. I can see adding a larger compartment containing work out equipment. This compartment would need to allow the bird men to stretch their wings out fully. It should probably also contain fairly powerful fans to allow the exercise of their wings to avoid atrophy.

If the ship is a zero gravity environment, I could see the wings function shift from a flight mechanism to a way to stabalize oneself or push off from one wall or chamber to another. In this case the walls would likely be padded and made to be touched and chambers would be round and of a size just slightly smaller than the average wing span.

I don't think the wings would get used very much, at least not for flying. Not only would there seldom be enough room for wings to be used, but flapping around in a spaceship is a great way to break equipment, or at least send your papers flying. Plus, most birds have really strong legs; in zero-g, they should have enough power and poise to jump to wherever they need to go without the help of their wings.

For creatures with arms and wings, I would suggest that they may opt to cut off their wings for space missions, but I really can't say if bird society would properly accomodate for them back on the planet (I think it would, but that might just be because I don't have wings). Even if the wings aren't removed, they should at least be strapped down firmly to the creatures' backs/sides, to avoid any involuntary flapping. This shouldn't too greatly impact the bird people, so I'd say space architecture would be pretty similar to how it is for humans.

Now, if the creatures use their wings as their arms, like bats for instance, strapping them down is not going to be an option. Instead, I'd think architecture would adapt to make use of these wings. Since these creatures will probably have very long wingspans, I'd think elliptical corridors would be favored over circular ones; that way, the creatures will be able to make flapping motions more easily. I still don't think they would actually 'fly', but they could definitely crawl along with their hands, so having enough room to make that natural flapping motion while grabbing at the walls will be helpful. With more room, corridors may become circular again so people can turn around easier, but width along at least one axis should match up with wingspan.

I'd think that birdlike creatures would be much more comfortable with the modern design of spaceships than humans are; after all, they can and do move in all three axes. Therefore, I don't think they would depart too far from the current spaceship designs: just put everything on the walls, make sure people can pivot enough to turn in any direction and pass each other going any direction, and don't put people in situations where they're stuck in empty air with no hand-or-footholds.

As to your concern over broken bones, I don't think there's much that would be done. Just look at how astronauts don't wear helmets; they're not worried about giving themselves concussions, so the bird-people shouldn't worry about breaking their wings off. If anything, training is better than protection; the added weight of knowing how to not hurt yourself is far lighter than a ship full of pillows.

I think, for what I can see on the video, that I would try to optimise every inch of the ship internally so the air can run freely, so every beating of the wings would return to the wings and allow me to move faster.

The video is showing a group of birds flying on zero gravity. They fly on whatever position they are but they are wasting a lot of energy on every beating of the wings.

Not the answer you're looking for? Browse other questions tagged aliens spaceships architecture .

5
Who will find out alien installment on Jupiter orbit?
14
What are some major architectural designs in spaceships for aquatic beings
14
What is a good way to estimate the mass of spacecraft?
4
What's a safer design for a relativistic kill vehicle?
13
What kind of planet would be needed to create aliens which are significantly larger and stronger than humans?
30
Lopsided artificial gravity
10
Could a combination of cheap energy and powerful thrusters turn good aerodynamic design into something that isn't always worth the cost?
4
How could a starship take on a planet-massed passenger without noticing?