Mating Habits and Social Structures of a Three Gender Species

The species here has three possible genders, "A", "B" and "C" (for simplicity's sake). Each of the three genders can mate with another gender, producing the third gender. In other words, A and B reproduce to form C, B and C together make A, and A and C together form B.

However, it's a little more complicated than that. Like males, the "A" gender does not have a womb and cannot become pregnant, while "B" and "C" both have the capacity to become pregnant. So when "A" and "B" mate, "B" will be pregnant for a few months before giving birth, while "A" is able to continue to reproduce with others. On the other hand, when "B" and "C" mate, either one or both of them become pregnant and bear children (the genes would not be identical), and thus one or two of them would be unable to breed for months at a time. This means that "B" and "C" both have a gene-delivery system (like a penis).

With this in mind:

This is a really interesting species to think about. Since the problem isn't easily done in the mind, I did some agent-based modeling to see what would happen. A more extensive write-up of that question can be found on WorldBuilding's blog on Medium.com.

My primary finding was that the ratio of sexes in this species are susceptible to wild oscillations. In a starting population of just 20 where half of those individuals were As, within 100 years (or the 5th generation) the As wildly outnumbered the Bs and Cs combined. 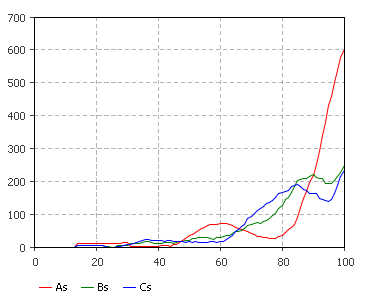 If the As are in any way more aggressive then Bs or Cs then a war is going to breakout or something. In normal duo-sexual species, a 20% preference for males over females has a profound impact on practically every aspect of society. Ask China how that worked out for them. A more balanced set of sexes in the initial population lead to decreased or no oscillations in the sex ratio.

Will population/distributions of the different genders remain approximately equal, or will inequalities/eventual extinction occur?

This species is very sensitive to ratios in the sexes. If there are significantly more of one sex than any other then wild oscillations in sex ratios result. The population won't die out immediately if all As die because the As can be brought back by the Bs and Cs. However, this means that while all those As are growing up, there aren't any Bs or Cs being born either. Because of the deterministic way that the sex of an individual is determined, these oscillations may be inevitable without any kind of dampening social or environmental pressure.

What sort of social structures and mating habits could develop?

Social structures and mating habits would evolve to provide damping forces on the oscillations because a run away growth of a single gender over the others will have huge repercussions for decades, if not centuries. The species may develop a built in knowledge that sometimes, an individual isn't going to be able to mate because doing so will exacerbate a significant problem.

Would monogamous relationships be dominant, or would something different develop?

I think there would a tendency away from monogamous relations as that would enhance any sex ratio oscillations.

Are members of the species likely to mate with the same gender across the board, or will they switch around?

They will likely switch around to dampen any oscillations or form up in tri-sexual families to ensure that all three sexes can be produced.

Note the extreme variability to these answers even in a two-sexed environment. There's no reason to suppose three sexes would suddenly get less complex.

Given the number of homosexuals in existence today, when homosexuality makes next to zero sense* from an evolutionary standpoint, I imagine there would be hugely different sexual preferences between members of a three-sexed species when those preferences can actually be useful in the selection algorithm.

It's hard to say, but my gut feeling is that, for any given population, one of the sexes would end up being less preferred by the other two sexes, and would therefore eventually go extinct. This would take quite a bit of time, but I think it would eventually happen.

Note that a different sex might go extinct in a different population group, and there's no particular way to determine in advance which sexes would dominate in any particular group.

The only way to keep a sex from going extinct is if all three sexes are required to reproduce. For example, maybe A and B need to mate to produce one half of an embryo, then B and C mate to finalize the embryo. In this case, either selection will find a way to bypass one of the sexes (who will then go extinct), or all three sexes will remain part of a stable population.

As for the proportions, I don't know. It doesn't make a lot of sense to me that there are so many males. One male can easily keep dozens of females pregnant, but somehow nature decided a 50:50 ratio was better. The answer seems to be that males have a selection bias**, so couples with more male children produce more grandchildren, so despite the lack of "need", more males are produced anyways. Obviously the answer is somewhat complex, but if that rationale holds for three sexes, the ratio would likely be even as long as all three sexes are required.

*My best guess, which Google says is some other people's best guess, is that either: having homosexuals around helps the rest of the population's sexual fitness somehow and therefore populations with gay genes thrive better than populations without, or: something that makes people more sexually fit happens to occasionally make gay people, and the added fitness to other people outweighs the reduced fitness of gay people. Or some combination of both. Source -- warning, scantily-clad men, possibly NSFW.

The questions you are asking do not have fixed answers. A lot of sexual psychology has to do with what people/creatures like to do. As such, you are free to tweak the preferences of your characters the way you want. Here in our world, you cannot define why some people like homosexual lifestyle over heterosexual or vice versa. It all goes with personal choice.

As for whether races would be monogamist or poly, this depends not only on sexual preferences but also on the economy structure of the family and the physical strength of the genders. It also depends on which gender has more outdoors exposure (males in our society) than the others.

So all in all, the world you are creating is yours to create. You can make one gender very much prized by the other genders (maybe because there are few of them and bearing a child of this gender takes more time and there is a huge chance of infant fatality for this gender). You can put homosexual traits in the genders (varying according to your choice). Your system of 3 genders does not naturally place confines or create social/family structures in itself. Things are a lot more complicated than that, and a lot goes to personal choices and social structures.

Not the answer you're looking for? Browse other questions tagged gender sex social-norms .

52
Is it possible for a species to have more than two sexes?
33
How to handle a tri-gendered race
16
What's a plausible way for a three biological sexes setup to develop for a dominant intelligent species?
4
Viable Social Groups for species with three sexes