To Catch A Planet

Let's suppose we live in different star system with two similar-sized planets (with a mass of three and a half Earths.) We live in Planet A, which is habitable. For some reason, Planet 2, our neighbor, enters in collision orbit with our Planet 1. But us, Planet-1ers are not happy with this, so we somehow catch Planet 2 and keep it close together. Both planets end up as a double planet.

Now, what would it take to catch Planet 2 and keep it orbiting along with ours? I'm aware that with current technology it is not possible, but let's suppose for a moment we have an advanced level of technology, but still not going off the laws of nature. 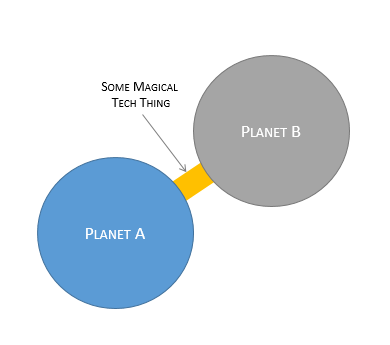 It would be far easier to just move one of the planets a little so they don't collide if there's a large velocity difference.

If the planets are just barely going to collide, it seems like it might make sense to try to catch one. The problem is once you've caught it, the two planets will destroy each other from gravity. Unless your magical tech device can magically prevent gravity from working, you'll get something like this:

The only way you're going to avoid this is if the planets are far enough apart that they don't tear each other apart. At this point, the best bet is just to get the new planet into orbit around the old planet.

I thought there was a question about how to move planets around, but I'm not finding it right now.

There are 2 separate tasks: avoiding collision and forming double planet.

So, if civilization thinks about creating double planet, then collision is not a threat, if it can barely escape a collision, then creation of double planet is out of question.

You'd probably need an artificial black hole as a stopgap measure to do the capturing but in theory you could get your two worlds orbiting a mutual centre of gravity like Pluto and Charon. I'm pretty sure that having done this the two worlds will be tidally locked to each other as they orbit that centre though so you're going to lose a lot of habitat on both worlds. If you actually have the technology to capture a world in this fashion you can probably produce a better outcome.

31
Can a nonspherical planet exist and can it be habitable?
8
Could you create a travelling planet?

2
What happens when a tidally-locked planet breaks out of the synchronous rotation?
8
How to improve space bandwidth?
5
Can this planetary system remain stable?
6
Two orbits, Four habitable planets in the goldilocks zone?
13
Can two stars orbit each other but each have their own planets in stable orbits?
0
What could prevent a planet from possessing magnets/electricity?
23
Can the Little Prince's planet actually exist in our universe?
6
What would happen on the surface of a terrestrial planet captured by a gas giant?