Right now I'm writing a sci-fi story that develops in a double planet (think of Rocheworld.) The double planet (along with a couple more planets) orbit a big star and the whole system is orbited by another star (about 10,000 AU from the central star.)

I need to know how implausible this is. I don't want my story to drift from speculation into the impossible. I'm guessing that the occurrence of such a planetary arrangement is very low likely, but is such a system even possible at all?

Now, if it's possible, how messed up days and seasons in this planet would be? I'm bending my brain to figure out what would be the length of day and night in such a system (since the planets are very close to each other.)

Any help with this will be really appreciated. 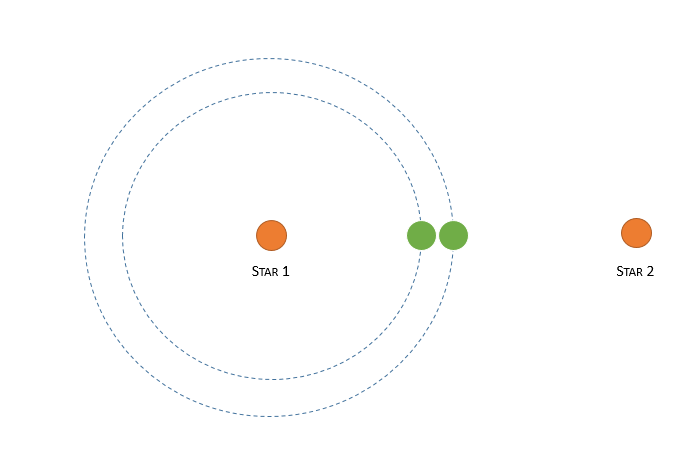 One thing you will need to know is that the planets won't stay together like that. The closest you could do would be to have them orbiting each other like the Moon and Earth. Otherwise the inner one will slowly pull away from the outer one until it catches up from behind.

This is because the speed a planet or other object orbits another is based on it's distance from each other, period. Closer is faster, farther is slower.

In a similar situation, Janus and Epimethius are moons of Saturn. Their orbits are close enough that they don't pass each other, they trade orbits. If a similar situation happened with Earth, they would trade places about every 5000 years.

Now day/night. the farther sun would likely be more like a moon depending on the distance and at times it will be on the opposite side of the first star as each one goes around at different speeds.

The day length would depend entirely upon the rotation of the individual planets.

There would be additional periods of darkness during "eclipses", which would depend on the angle and timeframe of the mutual revolution.

Seasons would generally depend upon the angle of the axis of the individual planets. A fast revolution of the two planets would minimize the variance. It would be a bit cooler when farther away and warmer when closer, but with a fast mutual revolution, the temp would tend to stabilize towards what it would be at the average distance from the primary.

The formation of a double planet system could in theory be possible without any artificial intervention. In such a system, the gravitational centre lies in the space inbetween the planets outside either planet and as long as their orbital distance exceeds the Roche limit (the distance where the gravitational pull of the planets exceeds their cohesion, ripping them apart) it could be stable. Depending on the orbital distance, these planets could be tidally locked with one another (facing each other with the same hemisphere, like the moon). Partial solar eclipses should be an almost daily event and there should be some "weird" gravitational forces with it's effects being diminished in the space between the planets making flight/space travel less energy demanding or even allowing a tether (space elevator) between the planets. As for the companion star, it is believed that that wide binary systems orbit in highly elliptical orbit with a range of 100-1000 AUs. When the companion star approaches the nearest to the main star, its gravitational pull causes havock to the planetary orbits, sometimes even resulting to the ejection of entire planets.

Not the answer you're looking for? Browse other questions tagged planets space .

3
Orbit of a double planet
5
Could Two Planets Form A Binary System?
7
Tides on a double planet
7
Radiation from binary star systems and how that would affect a planet orbiting both stars
9
How far should second star be in my binary system?
6
Binary Star System Build - Alpha Centauri
5
Long Term Evolution of Double Planet System in Close Orbit
3
Could a planet form from the remnants of a star and its solar system?
3
Central planet in binary star system?