The war between the North pole and the South pole. Who would win?

In my world, animals display levels of intelligence that are very close to that of humans. Everything else about them is effectively the same (hunting/breeding/living habits.)

What has happened is that global warming has devastated the north more than it has in the south in recent years. As a consequence, the animals of the arctic have decided that invading and occupying Antarctica is in their best interests for survival.

Now in this particular world, Antarctica and the Arctic are very close together. Lets say that there two regions are separated by a strait that is 30km wide (for the most part) and there are several islands in between that make for easy passage for animals to get from one side to the other (lets say that the animals ride on the backs of whales to get to the other side).

Note: This detail exists mainly to eliminate the problem of distance between the two regions as they currently exist in our world.

All species of animals in both regions have committed to the cause. This includes marine life and birds. They don't make use of technology, but rather rely on their unique abilities to contribute to the war effort.

Now the question is, could the invading Arctic faction take over Antarctica and colonize the island (and its surrounding waters for the marine life)? or would the defending Antarctic faction defeat the invaders?

Short answer: Based on general knowledge, probably. The North Pole has the massive advantage of polar bears, while the South Pole relies primarily on penguins. Penguins vs. polar bears? One of them is 990lbs, and the other is not. Whales might make a decent navy, but both regions have these whales. The Arctic also has wolves, and wolves are especially deadly – deadly in the same way a SEAL team or other army team of your choice might be deadly – because, much like prides of lions, they cooperate.

Longer answer: You've characterized them as intelligent. Probably not. Based on the information about your world, and not the real world, the Antarctic should be able to pull this off. Given that the "Antarctic" and the "Arctic" are less opposite poles and more similar regions, it's likely that your Antarctic could have polar bears and wolves – simply because the two regions are so close together and would have a similar climate, unlike in the real world.

But the real reason I'm answering "probably," is that, based on the fictional world you've described, my bets would be on Antarctica. You said that the Antarctic is led by the Emperor Penguin (clever), while the Arctic is led by a king and a queen. Historically, an "emperor" is used to describe the figurehead of a state which conquers other states. One definition, in fact, of "empire" is " supreme political power over several countries when exercised by a single authority". Traditionally, empires conquer, turning countries into provinces. As a result, I'd be willing to bet that the Antarctic Army has fought in more wars, invaded more regions, and generally conquered more than the king and queen of the Arctic.

In the real world, an average adult human human weighs 175lbs, compared to a polar bear's 990lbs. Still, in a fight of a Roman Legion vs. a random group of polar bears, my bet would be on the Roman Legion. The legion has the command structure, they have the experience, and they have the tactics. In the same way, although penguins are much weaker, physically, than polar bears, a legion of highly organized, highly skilled, and highly experienced penguin warriors fighting for the glory of the Antarctic Empire would almost definitely be able to hold their own against a faction fighting pragmatically, for global warming. The Antarctic would have both the moral high ground and the advantage of an ideology here.

It comes down, I think, to which group is more cooperative and experienced. If my conjecture is right, and the Antarctic Empire is a warlike, conquering state, the Legions of the Aurora Australis should absolutely know how to use their home terrain and their experience to their advantage, even when fighting powerful foes.

And I know you said that they don't use technology, but the image in my mind is still a group of penguins using catapults hewn from ice to fling massive, compacted, 2-ton snowballs at an army of polar bears from a snow-fortress fortification.

(Edit) Something else to consider is the lay of the land. This is a topographic map. The red regions are mountain ranges, and the blue regions are valleys. 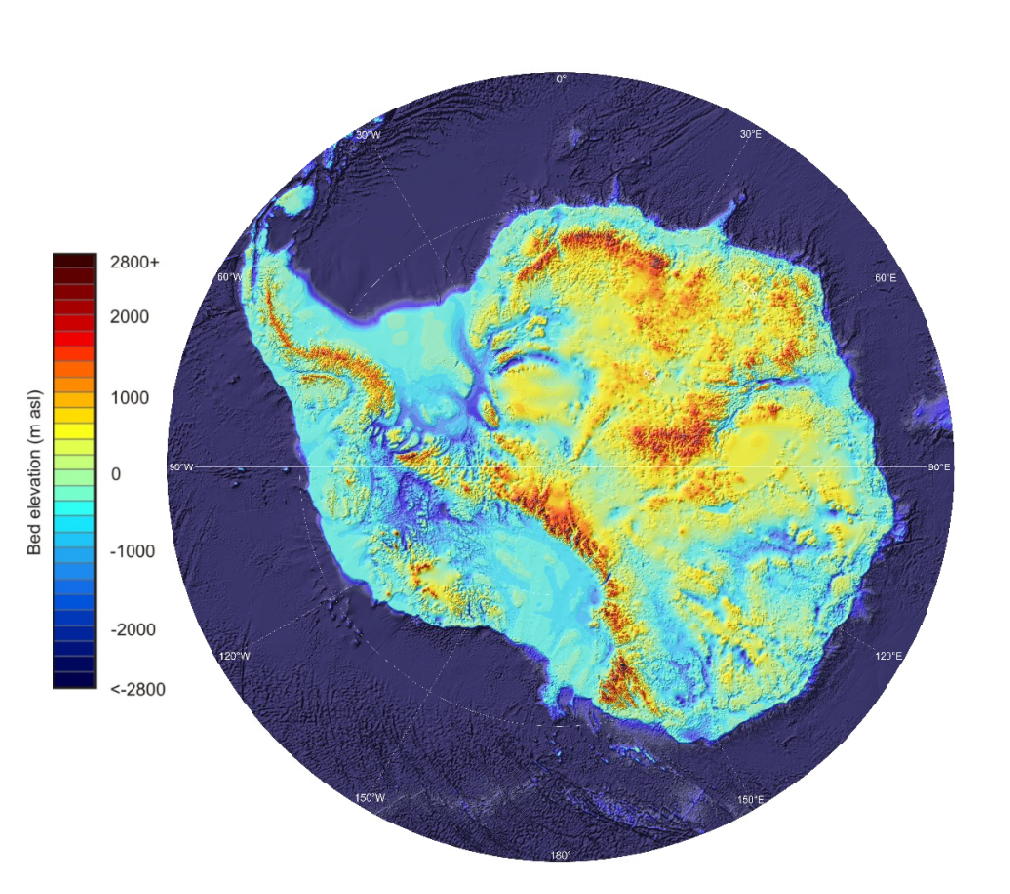 Very rough, with the center well-defended by mountain ranges and valleys. On the 60 degree west line, you can see an area where a group of mountains borders a valley, with only a small area of roughly even terrain. I'm just guessing, but the Arctic would have to invade from the North, and the only area where that is viable is the plains on the western side of the map. That means that at some point the invading Arctic armies will have to cross that chokepoint if they want to penetrate further.

Just a quick glance over this map shows that if the defenders know what they're doing, an invasion could quickly turn into a nightmare for the invaders. Assuming that the Empire knows how to defend itself in its own territory, it could utilize some of those strategic chokepoints to turn the war in its favor. Ambush the invaders at that chokepoint. One false move, and the enemy troops are cut off from their supplies in the heart of the most barren place on Earth. I'd expect, given that they're different species, that the troops would turn on themselves. Starvation, then chaos, then cannibalism, and it would fall apart from there.

Assuming you want the Antarctic to win, which it sounds like it based on the wording of this question, the Emperor (you) could definitely organize troops in a manner that would force the invaders out.

Polar Bear Hannibal would never make it to the southern half of Penguin Rome.

Shorter answer: Are the bacteria intelligent and on board with this? Then couldn't they evolve themselves into deadlier forms by selective breeding? Introducing new, deadly diseases via biological warfare would make short work of just about anyone.

TL;DR: It comes down to whether the Emperor leads what could be characterized as Penguin Rome, and whether you want Penguin Rome to win.

EDIT: Just occurred to me, looking back at this answer, that the Arctic will be fighting a Vietnam-type scenario. They're invading, but "global warming" doesn't sound like the kind of cause that a bunch of soldiers would want to rally behind, whereas the people/animals of the Antarctic will be driven to defend their homeland. Even if the Kingdom is superior to the Empire… will the war really have enough support on the offense versus the defense for the kingdom to win?

If you look at it from a logistics point of view, the polar bear army doesn't have to worry about a supply train. Eat what they kill and they can keep moving forward, every major battle resupplies them. The penguins, on the other hand, would be forced to fight defensively around their feeding grounds, which means that, theoretically, they could be easily isolated and conquered...

With polar bears, wolves and foxes on their side vs. only penguins, the win condition for the Arctic is simply to land a sufficient number on the Antarctic. One polar bear could take on hundreds of penguins. A pack of wolves even more.

Conversely, the Antarctic side needs to stop the Arctic in the water. They have leopard seals, who are more than a match for the swimming bears.

Enter the North's secret weapon: a massive horde of walrus. These fearsome beasts can fend off the leopard seals in the water, are pretty much immune to pecking from penguins and can simply crush them on land.

There are two battles here: The naval battle and the land battle.

If the south has total naval supremacy they could prevent such a landing. However, they do not have any means of long range reconnaissance, the battle comes down to the entire northern navy vs whatever force the south can deploy locally. Given force that are in the same ballpark the one that can bring it all to bear wins. Thus the north gets it's invasion beachhead. The navy then goes home, the south falls.

Not the answer you're looking for? Browse other questions tagged warfare fauna .

5
Help/Advice With Making My Designated “Good” Faction Read As More Obviously Good, And Making My Designated “Evil” Faction Read As More Obviously Evil?
13
If the North and South Poles' ice melted instantly, what would be the effect on humans and other animals?
76
If the insects declared war, who would win?
10
Who would win? Dinosaurs vs Mammals
18
What underwater creature would be well-suited as a pack animal?
2
How would giant penguins affect the arctic/Antarctic ecosystem?
11
What would cause termites to be the dominant herbivores on a savanna?