What is the highest acceleration that a normal human could safely endure for (say) 8 hours?

I want to get a shuttle from place to place in a reasonable amount of time.

Say, 6 to 8 hours maximum, with a short break at the midpoint to turn around.

Assuming constant acceleration to midpoint and constant deceleration after that, what's the highest g-force I could sensibly inflict on my passengers without breaking them?

I'm assuming that they're seated (or lying oriented in the most sensible way, etc) and strapped in throughout the journey.

NASA Technical note D-337, Centrifuge Study of Pilot Tolerance to Acceleration and the Effects of Acceleration on Pilot Performance (1960) pages 30 and 31 graph G-force tolerance over periods of time. These are the limits where the pilots can still function. They all show a clear downward trend over time. 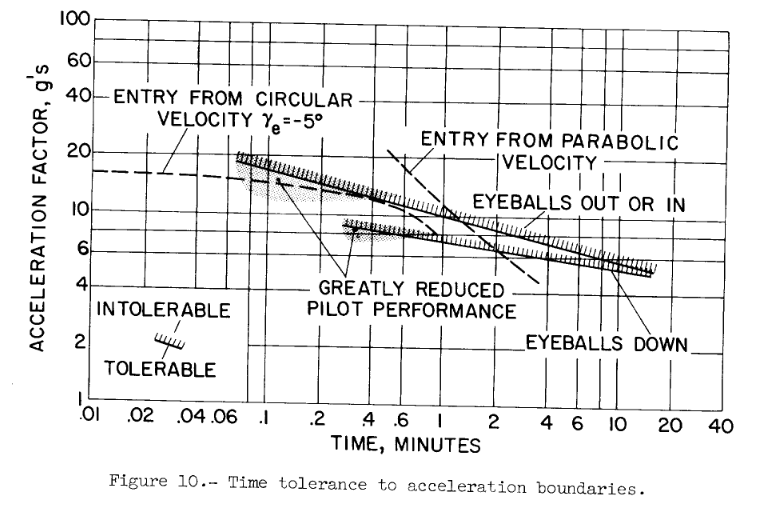 The longest period of sustained G-force evaluated in the study is ~35 minutes at ~3.5 Gs in the less favorable "eyeballs down" position (ie. deceleration). 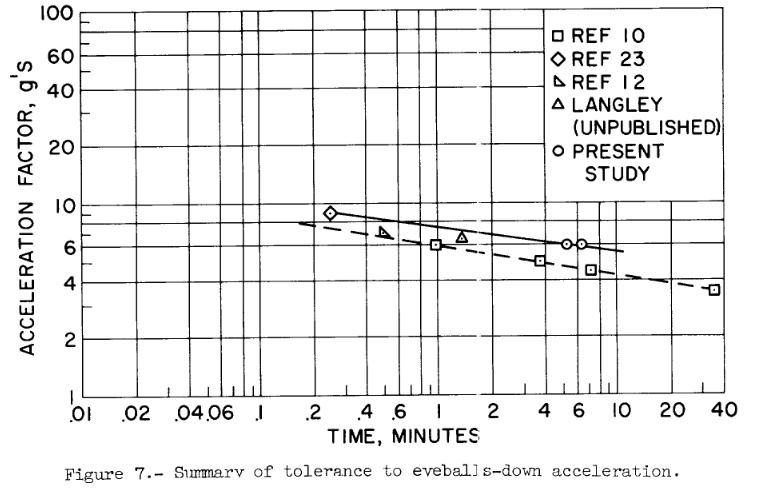 These provide an upper bound for tolerance. When extrapolating to 8 hours, please note the scales of the graph are logarithmic.

This article talks about NASA experiment with increased g loads.

Summary: they run 22h sessions the subjects were supposed to spend in a centrifuge, this included standing up every 4 hours. The writer of the article ran the session at 1.25g (with some dangerous medical situation). The guy before him managed 1.5g, but got ill at the end. It's not clear how much of the problems was because of the gravity and how much because of the Coriolis force.

No-one has yet mentioned the possibility of an acceleration tank. If a passenger is immersed in a strong rigid tank full of liquid with pretty much the same density as human tissue, the effective G-force is reduced to one depending on the difference in density between the liquid and the human tissue. We're mostly water, so water is a good match. Bones are denser, but bone and bone connective tissues are tough because that's their purpose. Lung tissue is probably the most vulnerable - it can't be filled with water, because we have to breathe air, and it's delicate. Shockwaves from large bombs kill by rupturing lung tissues.

But do we have to breathe air? There are chemically inert chloroflourocarbons which can cary a large amount of dissolved oxygen. A rat can be submerged in such a liquid and can "breathe" it for a considerable time. I don't know whether it's been tried on humans (and if it has it may be classified secret). An emulsion of such a CFC in saline has medical approval as an emergency blood substitute for when no compatible transfusion is available.

Anyway, I'd guess at something like 10G breathing air in a water tank and maybe up to 50G breathing an oxygenated CFC liquid.

The weight penalty for an acceleration tank is very considerable (many times greater than a passenger or pilot), so the idea has never been practical in aviation or spaceflight. However, if there's a very cheap source of energy for propulsion, maybe it could then become practical.

Making a planet habitable for humanoids: The planet

I put a small section in there on G-forces. Orientation is VERY important, some humans can handle up to 45Gs for short periods of time if they're positioned correctly (eyeballs in/on their back - heart-brain same level, spine supported, etc). Vibration is important too. If you're at the wrong frequency even low levels of extra G can be incredibly harmful. If this is a shuttle, and you've got your humans in cradled seats, properly oriented - then you can get a lot more out of them, than say fighter pilots, who experiences jerks, and turns - instead of being correctly oriented to the thrust axis.

6Gs are handled for something like 10m; because you can only handle 10G for around 1m.

I'd guess a maximum of somewhere around 2G sustained for the 8 hours you're specifying (I don't think anyone has ever had the opportunity to test that duration, much less get us some type of average). And this wouldn't be halfway pleasant at all.

I think if you're launching from the surface of a planet/gravity well, you're going to want to vary the thrust. A lot at the beginning, then give the humans a break, then go into a constant-sustained thrust regime. A lot of thrust, quickly will get you out of a gravity well, whereas lower thrust will take a lot longer to get you a smaller distance - depending on the technology, obviously.

Of course this is going to be some near-magic technology you've got going on, as keeping that much thrust going for that long is difficult - 90% of a rocket's mass is propellant, and we've never done a SSTO. Easier to drop engines after use than to deal with complexities of different thrust needs. And you burn most of that within the first 2m30s (for the shuttle).

Most rockets only burn at lift-off around 1+0.3G to sometimes 1+0.6G, because of engine-scale, etc. Which seems wasteful, as the longer you're in the gravity well, the more you've got to burn just to stay even.

Fighter pilots get to live through a tremendous 3g acceleration without breaking their bones, when they make sharp turns. Anything above 3.5g is expected to leave permanent damage to bones and sinews. The crew (if trained for space travel thoroughly) might sustain upto 3.5g without undergoing any permanent damage.

Not the answer you're looking for? Browse other questions tagged humans hard-science space-travel spaceships or ask your own question.

3
Acceleration insulation: I can build the Moon cannon, now what?
7
Is there a drive for a spacecraft that produces decent acceleration?
5
61 Virginis Mission Design: Long Term High Gee Acceleration and the Human Body
11
What is the highest concentration of oxygen a human being can reasonably survive?
10
What sort of acceleration would I need for my space ship to reach Eris in 3 months
20
A non-technological, repeating, phenomenon in the sky, holding its position in the sky for hours
1
Can someone with a better understanding of physics review or correct my design of a hypothetical fusion reactor for space vessels?