How long would it take for inbreeding to become a problem within a certain population?

I'm working with a city that has cut itself off from the surrounding area. There may be as many as 10,000 people within it, or as few as 1000. I'm trying to be as realistic as possible. How long would it take for inbreeding to present problems, ie genetic diseases, or mental health issues? This will give me an idea how many people live in the city and how long it has been in existence. Let's assume that the city was founded by nine families that were quite diverse in their genetic code.

The graph beneath (from Popular Mechanics) provides a pretty good estimate of variation in a gene. The key conclusion that one can draw from it is that a population of 10,000 people should be enough to be sustainable without any major inbreeding issues, while 1,000 is too low (it would land between the green/yellow lines on the graph). Source 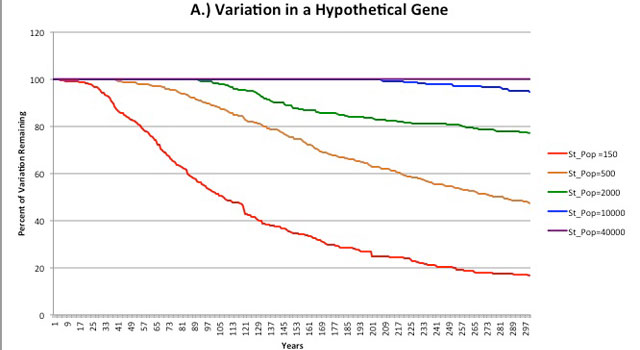 In terms of mental health issues, Dunbar's Number is a good reference point, meaning that in an ideal circumstance where everybody likes each other, 150 people is enough. With 10,000 people, you would only have to get along with 1.5% of all the people in the city, which shouldn't pose any systematic problems in the sense of loneliness.

Finally, you mention the city founded by nine families – depending on the sizes of such families when they first come, this could have pretty serious consequences in terms of genetic diversity. Even considering 16 sets of 'unique' genes (as in 16 genetically unrelated great-great-grandparents) per family, that would only come out to 144 'unique' genes total, which isn't very much at all. In this case, the nine families could reach a total population between one thousand and ten, but the actual diversity genetically would be far lower, and there could very easily be inbreeding problems at that point.

Playing the devils advocate here but:

There is evidence that if done correctly inbreeding / line-breeding can be done is such a way to limit "bad genes" in a species.

When inbreeding is not practiced, any lethal, semi-lethal & undesirable recessives present in that line, are being passed down to future generations along with the good genes, without any apparent signs to you, the breeder. With the end result being, that a majority of animals of a particular line/breed/species will all be carrying these undesirable genes.

The insight that inbreeding gives into your lines, is invaluable. If you don't know about any bad traits, should they be present, then how can you expect to eliminate them. It's the responsibility of all serious breeders to ensure that their lines of animals are genetically sound...

Bad genes not only affect the aetiological and health areas of your chosen breed, but temperament as well.

Inbred (rat) strains have been developed by laboratories and scientists alike, with positive results rather than negative.

*Gregor Mendel, was reputed to have bred brother and sister mice together for 40 generations with no adverse affects and increased overall body size by over 50% in the process .

*The Sprague-Dawley line was created by mating an original black hooded buck to an unrelated doe, then mating him back to his daughters for seven successive generations. The line was closed. (circa 1958?) which means in effect all this one lab line come from those rats and no outcrosses.

*Many lab strains are closed - if you visit lab webpages, some have been closed from as far back as 1947. If these rats were suffering any deleterious effects from that much inbreeding they would no longer be a marketable, reliable, commercially viable product for experimentation. The whole idea was to create homogenous rats which give consistency for their purpose.

What does inbreeding (in the genetic sense) do? Basically, it increase the probability that the two copies of any given gene will be identical and derived from the same ancestor. Technically, the animal is homozygous for that gene. The heterozygous animal has some differences in the two copies of the gene Remember that each animal (or plant, for that matter) has two copies of any given gene (two alleles at each locus, if you want to get technical), one derived from the father and one from the mother. If the father and mother are related, there is a chance that the two genes in the offspring are both identical copies contributed by the common ancestor. This is neither good nor bad in itself. Consider, for instance, the gene for PRA (progressive retinal atrophy), which causes progressive blindness. Carriers have normal vision, but if one is mated to another carrier, one in four of the puppies will have PRA and go blind. Inbreeding will increase both the number of affected dogs (bad) and the number of genetically normal dogs (good) at the expense of carriers. Inbreeding can thus bring these undesirable recessive genes to the surface, where they can be removed from the breeding pool.

With the proper observances it is possible to use statistics to increase the success of a mating selection / schedule of said population.

COEFFICIENT OF INBREEDING AN INVESTIGATION INTO WRIGHT'S EQUATION AND HARDIMAN'S METHOD http://www.highflyer.supanet.com/coefficient.htm

The standard definition of inbreeding is that it is any scheme which results in the sire and the dam having common ancestors. Many breeders use the term "inbreeding" for close relatives and "linebreeding" for more distantly related individuals, but there is no fundamental difference. The parameter used to express this common heritage is called the inbreeding coefficient and was first proposed by Sewell Wright in 1922. Designated F by Wright (but more commonly IC or COI by breeders), it can theoretically range from 0 to 100%, and indicates the probability that the two alleles for any gene are identical by descent. http://www.leonberger-database.com/coi_e.html

Providing the city isolated itself on purpose one would think they would enact mating stipulations using population control such as arranged marriages and birthing license to control blood lines. (ie refusal of procreation permissions if any bad genes are dominate). If done correctly it may be possible to eventually breed out unwanted traits.

Traill et al. reported a median MVP of 4,169 individuals. (Which means, not families of related people).

9 founding families is going to be a bottleneck in and of itself, unless there are a lot of immigrants.

That number does not take into account any planned breeding, or social controls.

Genetic diversity is only a problem if you're not actively culling unfit genes. If all the genes are good (and nobody has perfect genes), then you have no problems with only 2 people. If you're willing to cull any problems, you can work it with quite a small population; as long as it came from very good stock.

I am again adding an answer that is really a general comment...

Historically people have lived in small communities without travelling that much and abandoned babies.with serious issues. And ostracised families with a bad history of issues.

So small starting population does not condemn people to extinction and obvious hereditary diseases. It condemns people to a degree of ruthlessness that modern people find unpalatable.

We have reached a level of genetic diversity where we do not need to do such things. Although eugenics, a modernized form of the same, has been popular at times.

So basically you can pick a relatively small starting population as long as you remember that it will have consequences to the way people act. Starting with ruthless and pragmatic approach to children but extending to religion.

This depends on level of development, but given any degree of superstition, people would come to recognize the more common genetic issues in the population and could come to associate them with curses from gods, demons, spirits, or witches. Thus a smaller population more vulnerable to genetic issues would see a world filled with hostile supernatural forces.

Since the topic is too broad for me to discuss here, I will simply post some links for you to study which are directly related to your query.

A genetic bottleneck occurs when a species undergoes a severe population decline. The survivors then replenish the population but the loss of genetic diversity takes ages to cover up. In case of humans, the group which gave rise to today's ~7 billion population contained only some 100 or so people. Yet we have overcome the problem now and are successful as a species. Another example are cheetahs who have severely low genetic diversity. They have also survived and not gone extinct so far.

If your population of 1000 is multi-ethnic and has a high genetic diversity from the start, inbreeding problems would appear after several generations (a couple millenia). However if the population consists of a single race (and worse yet, a single tribe or clan), then the problems would arise within some 300-400 years or so.

You may find this article interesting: https://en.wikipedia.org/wiki/Uncontacted_peoples. Apparently there are several small groups of people (populations of 500 or fewer), who have lived in isolation for many generations with no apparent ill effects.

Not the answer you're looking for? Browse other questions tagged science-based society or ask your own question.

3
How do I increase my population of my very small starter population while warding off the negative effects of inbreeding?

12
What would be some realistic social reactions to a shapeshifter?
5
A Shining Beacon of Modernity and Hatred
16
How can someone be invulnerable to any damage down to cellular levels while still having a limited lifespan?
4
Best/Realistic Way to Acclimate Astronauts to Zero G
6
Adapting humans to a permanent 1.5g environment
3
How long would it take for an independent group of space settlers to take over a planet?
22
How to cut off a (unaware and unwilling) city (not an island city) from the rest of the world for a short period of time? (about 12 hours)
35
Why is dwarfism considered an advantage for jobs in space?