How stable is the hexagonal rosette anyway?

The Wikipedia article on Klemperer Rosettes states that hexagonal rosettes are slightly more stable than other, non-hexagonal rosettes, due to the position of the orbital objects in the Lagrange points of their neighbors.

My question is this: How stable or unstable is it? That is, given a small push (say, changing the momentum of one of the bodies by 1 in 106 or thereabouts), would the system stay in an equilibrium or fall apart? If it falls apart, how fast will it do so?

A Klemperer Rosette is defined as a system of an even number of sets of bodies. The bodies in each set possess equal mass. All bodies are situated at the corners of a regular polygon (with or without a central mass).

It is common to describe a similar configuration of identical mass bodies at the points of a regular polygon as a Klemperer Rosette but this is a misuse of the term. This configuration was known before Klemperer identified Klepmerer Rosette.

This picture from Cubist-Assassin64 provides a good view of a rosette, but it is NOT Klemperer Rosette 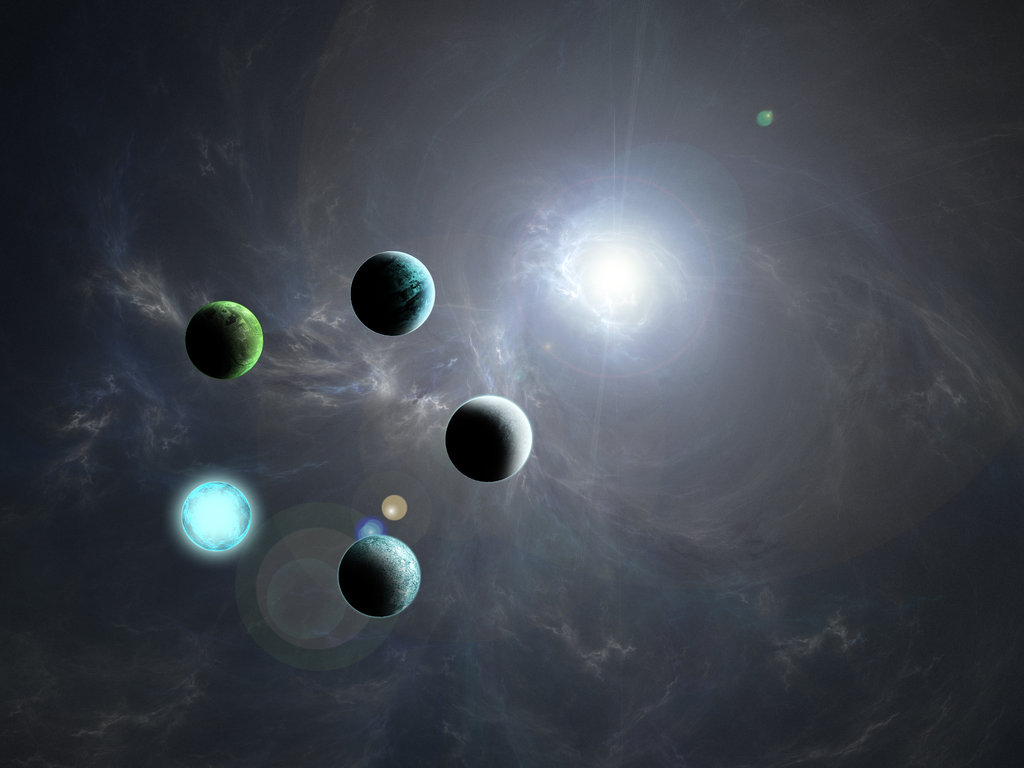 Such symmetry is also possessed by a peculiar family of geometrical configurations which may be described as 'rosettes'. In these an even number of 'planets' of two (or more) kinds, one (or some) heavier than the other, but all of each set of equal mass, are placed at the corners of two (or more) interdigitating regular polygons so that the lighter and heavier ones alternate (or follow each other in a cyclic manner).

More precisely, they are statically stable but dynamically unstable. Any tiny perturbation from this stable state leads to problems.

Simulations of this system2 (or a simple linear perturbation analysis) demonstrate that such systems are definitely not stable: any motion away from the perfect geometric configuration causes an oscillation, eventually leading to the disruption of the system (Klemperer's original article also states this fact). This is the case whether the center of the Rosette is in free space, or itself in orbit around a star.

Although still unstable, a hexagonal Rosette (of either type), should possess some additional stability because the adjacent bodies of the Rosette will sit in each other's L4 & L5 points.

Not being a physicist but being able to read, it appears from the Wikipedia article you posted it's as stable as the Lagrangian points of the system.

Lagrangian points are where the centrifugal and gravitational force balance each other out. In the hexagonal rosettes the objects are all in Lagrangian points. This is particularly stable because that's where the objects "want" to be. The forces on them are balanced and are therefore stable.

The amount of energy required to push them out of balance is proportional to the size of the system and the mass of the objects in it and can probably be calculated using one of the equations here.

A Kemplerer Rosette is not stable in the sense you mean. Any perturbation will eventually kill the configuration. From Kemplerer's paper "While the rosette configurations here studied are capable of revolving as a whole in dynamical equilibrium, they are not stable against random perturbations."

I once played with an orbital simulator and they seemed to oscillate back and forth a bit until one got launched out of orbit and started a chain reaction.

That being said, I believe that the simulator was not simultaneously updating every point, but was doing so sequentially. However, this sequential updating would (unintentionally) introduce perturbations, which does show that once out of balance, the pattern collapses rather quickly.

Additionally, I'm not sure how valid using Lagrange Points is in this configuration. Lagrange Points, by definition, are solutions to adding a third, much smaller object, to a 2-body system. The 2 bodies are a single planet and the center of mass of all other planets. The "3rd object" is identical in mass to the first object, and there are several additional masses in the system as well.

Not the answer you're looking for? Browse other questions tagged science-based planets space physics orbital-mechanics .

2
Can multiple similar planets share the same orbit without interfering with each other too much?
3
How many habitable planets can I have around my star?

12
In a created planetary system, how many planets can fit in the goldilocks zone with stable orbits?
4
Is this planetary system stable?
4
Is this moon system stable?
2
Could a gas giant have a stable orbit within the asteroid belt?
12
Two planets in a stable horseshoe orbit?
4
No More Looking from the Same Side of a Mostly Liquid Surface Terrestrial-based Moon
14
Are trojan planets possible? Are habitable trojan planets possible?
4
Could co-orbital planets also be double planets?
5
Long Term Evolution of Double Planet System in Close Orbit