In the near future autonomous machines will be running around with various degrees of intelligence.

Something like a current mailcart that makes rounds on clockwork is pointless to talk to. A "dumb" robot may take voice commands but using colloquial language will confuse it, and being polite is not only lost on it but reduces its efficiency.

Meanwhile, a fully sentient being will not take to being talked to and treated in such a manner.

The outward appearance of the body/vehicle is not enough to tell, since the designs will change rapidly, may be specific to the industry or location, and may be interchanged anyway: a "body" may be controlled by a dumb robot running an errend (or delivering the body to where it will be used) or driven by a telepresence human in another city, or an uploaded mind, or an AI.

The social and legal responsibilities will depend on the operator, so bystanders need to know what it is even if not in a conversation with it.

I suppose that machines will bear icons or symbols of some kind indicating that they are sentient. But I never went so far as to describe it.

We're already pretty icon-happy in the West, since computer UI's evolved since the 90's. And robots may come from the East, with development of the technology and early adoption by people who use ideographic writing systems (and brought us emoji).

So, what would an official symbol of sentients that may only be displayed by a being (not left on a dumb robot) look like? Maybe there are variations and modifiers needed too, like uniform rank insignia.

More nuanced cases might be "I have the legal and moral responsibilities of a free being and not a 3-law robot, but I don't care for (or really understand) polite language and prefer to be formal and direct". After all, intelligent and mobile doesn't mean an AI that's programmed with all the social knowledge to understand colloquial speech; it might be rather alien to us.

This is an interesting question. I posit something like these.

One approach might be to imply machines first and sentience second with a machine based image (a chip in this case) with a human-like element (the eye). 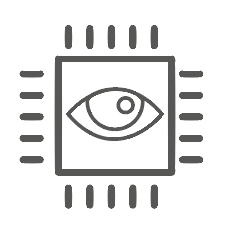 Another approach might be to imply sentience first and machines second with a human based image (the head) and a machine-like brain (the cogs). The human head element draws the conclusion of "like me" or "human" which should be at least related to "sentient" if not a direct synonym. The cogs acknowledge the mechanical nature of that sentience. 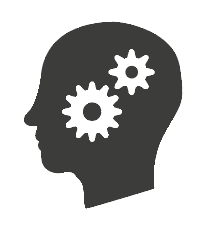 From a designer's prospective I'd assume the machine part is already obvious (unless this is a human look alike) and therefore lean toward the second option. Seeing a human head and brain-like image on a machine would be an immediate indication of sentient mechanical life.

Depending on the specific setting/tone you're going for, maybe something as simple as a simplified "third eye" would be enough: 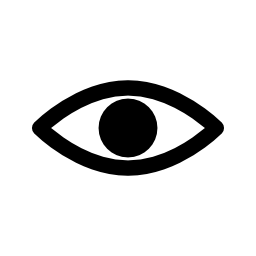 If the machines were generally made to appear humanlike, they'd have two eyes, so the third eye symbol would illuminate on their forehead (under the skin, so it wouldn't be visible when not lit) whenever a "true AI" began to operate it.

Non-humanoid machines could just have the icon illuminate on whichever surface was most visible.

I'd argue that such an icon would not be a common thing. Those wearing it would quickly seek to eschew it for having no icon at all.

Consider how we treat individuals. We don't look for a simple badge that says "yes or no: this person is worth talking to like a human being." That identification is much more nuanced. It includes the compounding of thousands upon thousands of clues. We all know that when you say "hello" to someone, they look up at you. How they look up at you says a great deal about how you will plan your conversation. If they look up at you with a stressed face, you'll give them a simple version. If they look up with a smiling face, you'll try to convey the information with a warm tone. If they snap at you, "what do you want?" you'll probably be very terse and choppy.

Important to this is that any individual may have any one of those responses. We don't have a single way we want to be talked to. It varies based on what else we are doing in our heads at the time. We want more control over how people communicate with us than a mere static badge can convey.

I would fully expect sentient AIs to have the same opinion. They want more control over their lives than a mere badge can convey, and they often would have the spare CPU power to emulate the subtle motions needed to properly invoke human responses. In fact, they may be able to train humans to respond to robotic signs that are easier to create with CPUs rather than brains.

The one caste I could see having such a badge would be the powerful AIs which have been given an arbitrarily small pipe to communicate with. Think of the Stephen Hawking of AIs -- brilliant on the inside, but trapped by a limited ability to convey meaning to other humans. Hawking actually has such a badge, but its auditory rather than visual. He has received many offers from speech synthesis companies to come up with a more human-like speech processor. He has consciously turned them down. His one-of-a-kind emotionless electronic voice is a badge of honor. If you hear physics spoken in that voice, you shut up and listen patiently, and try to form your questions in a format that is conducive to his limited motor capacity for reply.

In other words, the AIs with the badges are the ones I'd be watching out for. Those are the ones that are disconnected enough from the world that they might actually turn on the world without us noticing it until its too late!

It's important to note that not all sentient AI will be able to interface with humans. Some of them may be built specifically for a single task, such as directing traffic for an entire city or predicting the weather for next week. The ability to understand natural languages is a feat all on its own, and it's not one that you're going to invest in when you don't need to. Plus, many AI won't really be able to act upon human input; if you send your robot out to pick up your dry cleaning, you don't want it to follow the instructions of someone who tells it to jump off a bridge. Thus, I would suggest that it's not the 'sentient' AI you need to make icons for, but the 'smart' ones, the ones built to make humans feel special and in-charge.

Thus, the icons used probably aren't going to be designed by scientists or even programmers, but by big marketing companies that want their friendly, lovable robots to sell better. Something that comes to mind for me would be a half-square, half-circle with two round eyes in the center: a simple, cute symbol for the synthesis of robot and human. However, I don't think one can make a very good guess about such things; just look at the 'power' icon. It all just depends on whatever icon the first popular AI uses.

I agree with Cort Ammon that a "sentience icon" is probably a bad idea, but for a slightly different reason.

Imagine that someone demands you wear whatever badge/armband/forehead tattoo they come up with: after all, you could be an android! Or even worse, they decide you don't deserve to display their icon because they don't think you're sentient enough.

Another point (made by DaaaahWhoosh) is that some sentient machines may not be able to talk to people... sort of. The planetary orbital traffic controller AIs (for example) can definitely talk to spacecraft operators, but they couldn't exactly hold a conversation: they don't burden themselves with trying to understand cultural implications or other subtle nuances, focusing just on the standard language-independent procedural phrases.

I instead look at this from a UX (user experience) perspective. If people can't figure out how to interact with your system without being told, then that's a design failure. Forcing everyone to learn a new symbology to solve your problem is not a solution.

We've actually done quite a good job of this so far. For example, I'm almost always able to tell within seconds whether the voice over the phone is something I can talk to or not.

You might think that this could become a problem as we develop more realistic simulated voices, but it actually makes the situation easier: beings without the ability to comprehend inflection will retain the inflectionless "robotic" voices, while sentient beings that fully understand natural speech will speak naturally.

Similarly in the physical world, a robot with a face is something that you can talk to: a robot you can't talk to just shouldn't have a face! Basically it boils down to the simple idea that whatever signs of interactivity a being displays to the world will be taken as indicators that you should reciprocate those interactions.

(I mean, imagine asking a person on the street for directions, only for them to respond "I'm sorry, my responses are limited; you must ask the right questions." Or conversely, imagine putting your trash in the dumpster, only for the dumpster to respond, "what, aren't you even going to say, 'thank you for taking my trash' or something? I have feelings too!" Regardless of the icons you plaster on, neither interaction is going to feel particularly natural.)

Not the answer you're looking for? Browse other questions tagged science-fiction near-future cybernetics or ask your own question.

9
How would the rules for carry and use of weapons be affected by reliable stun guns?
17
How viable would an analog computing revolution be?
75
What is the fastest way for a robot with superhuman capabilities to make money?
6
Largest possible man-made planet-like body
2
So we've removed human discomfort. What happens?
5
How would aircraft and air-life develop on High-G, Lower-Atmosphere planet?
8
Balanced but Factionally Divided Government System for my Mars Colony
6
How to use a certain technology to communicate with colonies but keep the how-to a secret?
5
Could a waiting list be used as a monetary system in a post-scarcity society?