Number of Gravediggers in a Fantasy City

I've got a community of primarily gravediggers that I am trying to figure out the size of. Unfortunately, gravediggers are not a profession listed on any of the demographic generators I've found. So my question is this:

What number or ratio of the city would likely be gravediggers? If this is unknowable, what is the relationship between the number of gravediggers and the death rate?

At a death rate of 5% - it'll be higher during plague or famine years, lower if the city has good sanitation - there will be 25,000 graves to dig per year, or 68 per day. If it takes two people most of a day to dig one grave, and there's a little downtime, you need about 150 full-time gravediggers. Add to that a couple dozen shift supervisors, journeymen, and some administrators, and I'd say 200 dues-paying members of the Gravediggers Guild.

And probably another 50 grave robbers.

If you'd like to maximize the number of gravediggers in a city, I can think of a few reasons:

Contrariwise, if you'd prefer that their numbers be small, such that everyone knows everyone in the grave-digging community:

Jon of All Trades has the right general idea but I think the numbers are a bit off.

5% sounds incredibly high, that would imply an average life expectancy of 20 years old. Life expectancy at birth was 35+ so death rates would have been closer to 2.5% per year. Add to that, not everyone got a grave to themselves. Paupers, prostitutes and babies of fairly poor people who died at a young age would have been piled in mass graves

This is what the modern version looks like, in medieval times they generally wouldn't have bothered with the separate coffins for the very poor: 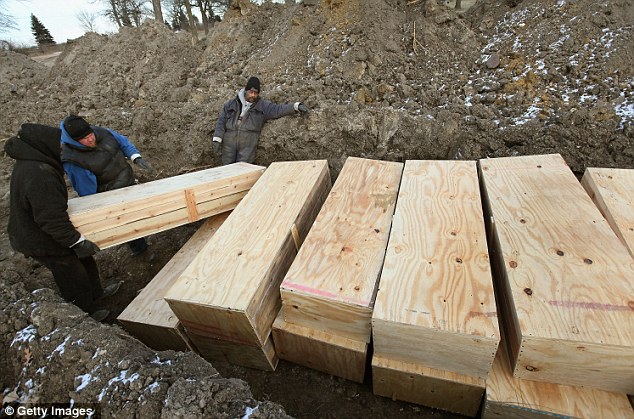 These types of graves take a lot less work per person.

Also it wouldn't take two professionals a whole day to dig a single grave, one professional could probably dig more than one in a single day but lets assume at least one grave.

So call it 12K dead per year, lets assume half of them are too poor to afford a private or family grave.

Lets assume 300 man-days per gravedigger per year for the sake of round numbers giving us about 24 grave diggers.

But we're assuming perfect efficiency and good organisation so lets double that, call it a round 50 full-time gravediggers

If there is a city with 500,000 thousand people and the average life-span is 70 years old. Then there will be about 7,000 people dead every year. In the fantasy city let's say supply and demand are the same. It takes nearly a full day to dig a grave so lets say someone can dig 300 graves a year (allow a bit of sickness or holiday). Then this city would need 25 grave diggers.

Not the answer you're looking for? Browse other questions tagged society cities population .

8
How big is a big city?
8
Land Requirement for Island City
3
Will A Real City On Earth Ever Have 100 Million People?
5
Rotating city in a fantasy world
8
Geographically, how large would a very populous city during the 16th century be?
5
City for introverts?
12
Calculating City Size based on Population
6
How large could a population of supernatural beings be and still be plausibly hidden?
7
What would be the best city in the U.S./Canada to live in for a supernatural being trying to exist undetected from humanity?
4
What type of infrastructure would be needed for an upside down city in a cave with a giant freshwater lake need if the the trade is a school/college?