So for the purposes of this question, the following items are already determined by our world:

Human intelligence is the intellectual capacity of humans, which is characterized by perception, consciousness, self-awareness, and volition. Through their intelligence, humans possess the cognitive abilities to learn, form concepts, understand, apply logic, and reason, including the capacities to recognize patterns, comprehend ideas, plan, problem solve, make decisions, retaining, and use language to communicate. Intelligence enables humans to experience and think.

How could the animals reveal their newly found intelligence to human society?

How could the animals first communicate their sentience in such a way as to convince the humans of their intelligence? Assuming that the animals are now smart enough to understand and parse together local language (English), but still lack the physiological ability to form human speech, how do they communicate? Would it be easier for them to approach as a large group or would they select a "liaison" to attempt to approach human society? Which species would be best suited for this? Would they head straight for places of government and large cities or would they drum up support from smaller villages?

You don't need to answer all questions above. They are just a few examples of discussions that branch off of the main question which is in bold. Basically a discussion of what methods would work best for human-intelligent animals, who had previously been seen as wild, dumb creatures, to convince humans they are now smart enough to cause some serious problems.

I'm not sure that you'll get the Animals of Farthing Wood setup you want. 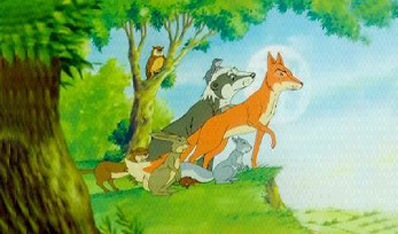 Animals in the wild

First, suddenly you've got a lot of smart bears but what are they going to learn from? They're not going to see signs and suddenly understand writing. They're going to be smart but they're still going to be bears. They'll be better at making bear choices and catching their prey in smart ways and some might even start using rocks as tools.

Smart does not mean cooperation.

Humans are smart but we have a tendency to murder anyone who doesn't look like us. Why would bears be less racist(speciesist) about smart dear than we are about other smart humans?

Smart does not mean peace or fast development of tools

Smart humans went 40,000 years in Australia without developing the bow and arrow and they fought wars with each other.

Which animals are most likely to learn english and try to communicate with humans then?

Rats live in close proximity to humans. They outnumber us so there's going to be hundreds of millions of smart rats so lots of chances. There's going to be lots of little smart ratlings hearing english as they grow up with the best chance of learning language and understanding.

If they're curious they're the most likely to be able to peek into classrooms or watch humans talking, singing, dancing or to learn anything else from humans.

They're going to be scared, particularly when they learn how many rat-related expressions we have. They won't want to be "trapped like a rat" but with tends of millions of young curious rats eventually some are going to try their luck at communicating.

Most will be ignored or people won't understand and will just freak out at the rat but sooner or later someone is going to start talking about "The Pet Rat I Just Caught Which Can Totally Count and Do Tricks" and from there reports of things like a rat pushing pebbles into patterns that look like writing from signs or similar are going to start spreading until people will start looking into it seriously.

1800's era it a bit sketchy, humans were still classifying other humans as fauna at that time so rats aren't likely to get the vote but some of the gentlement scientists are going to figure out that they're pretty bright for animals.

The rats won't need to "head" for places of government, they're already there.

Now the question is, how much would humans freak out at the idea. I'm thinking a major rat-genocide from angry and afraid humans with smart rats poisoning humans in retaliation.

I'm reminded of Mary Shelley's Frankenstein, wherein the Monster learned english from eavesdropping on another person learning English. That seems to be the most likely way for an animal to pick up on the language. From there I would think it would be mostly body language and pantomime. Much like an infant communicates at their stage of development when they can understand speech but not speak properly. There would be noises to draw attention, and then pointing/circling/touching that would indicate the rest.

However, I think there are real questions as to whether the animals would want to communicate with civilization at all.

Accepting the premise that the animals are friendly and working together, they would likely be able to sustain and support themselves as their own society. They already understand each other, and you've said they are drawn together from their strange circumstances.

To that end, the first interaction from humans would likely be by people accidentally discovering them in large unsettled woods or other areas. Noticing a tight circle of animal dens, or observing a group of different species working together in a river to catch fish. The sentient animals would likely play dumb when possible to avoid the attention of the humans.

Not the answer you're looking for? Browse other questions tagged society culture fauna intelligence .

42
For designing a vocal language for an intelligent species, how to decide on phonemes?
7
Intelligent Animal Politics
1
How quickly could animals evolve?
2
What would happen if all (higher) life magically became sentient and reached human-level intelligence?

4
What would be the effect of introducing genetically modified chimpanzees into human society?
5
Consequences of controlling intelligence
51
What good are herbivores in an animal army?
7
Intelligent Animal Politics
4
Human interactions with a sentient biological species it developed?
8
Saving intelligent animals from abuse/large scale breeding
3
Could intelligent animals stop civilizations from colonizing too much land?
33
How dangerous are animals with no history of human contact?