How can you make a stable configuration including a moon that has a moon?

A moon is, fundamentally, a rock that's caught in the gravitational field of a bigger rock (a planet) and drawn into an orbit. Some of Saturn's moons, for example, are speculated to be debris from the breakup of minor planets, while others are more-conventional small planets. (Please feel free to correct or elaborate on this simplistic view of astronomical bodies.)

If a planet can capture moons like this, can a larger moon capture a much-smaller one? If so, are their orbits stable? This answer to a similar question suggests that if the moon is far-enough away from the planet this could work, but does not go into detail. (That question asks if it's feasible for an earth-like planet to have this configuration; I'm not limiting my planet to being earth-like.)

If this is possible, what are the key parameters for placing a planet, its moon, and its moon's moon to avoid having the whole system collapse or break up? Do the moon and its moon need to be far from the planet (to keep the planet from grabbing the moon)? If so, how massive do the planet and the primary moon need to be to keep the moon from drifting off? How are the orbital planes likely to relate to each other? Do the three bodies need to have a certain range of relative sizes?

In order for an orbit to be stable in the short term, it needs to be within the Hill sphere of its primary. For a circular orbit, the radius of this sphere is approximately:

For long-term stability, the orbit needs to be closer to its primary; typically about 1/2 to 1/3 the radius of the Hill sphere.

You can continue stacking moons as long as each moon is dense enough that its Hill sphere is larger than its radius. To maximize the depth of your stacking, each moon should be as far from its primary as possible.

* Actually, it's about 5% smaller because the Moon's orbit is elliptical with an eccentricity of 0.055.

**Sort of. Get too close to the surface, and local variations in the gravity field make the orbit unstable.

I’m going to make some assumptions in this answer:

Two moons have masses $m_1$ and $m_2$ and orbit a planet of mass $m_p$, where $m_1, m_2\ll m_p$. The planet is far enough away from the star that any gravitational/tidal effects from that star are negligible. There are no other planets capable of destabilizing any moons in orbits reasonably close to the planet (i.e. well within its Hill sphere). This, along with the second assumption, means that we can effectively treat the moon system as a miniature planetary system.

In this scenario, we see the possibility of $m_1$ capturing $m_2$ just as Neptune is thought to have captured Triton, involving a three-body collisionless encounter. $m_2$ would originally have been part of a binary moon system of some sort (see my second section) which then interacted with $m_1$; the other binary partner was ejected and $m_2$ became a satellite of $m_1$ (see Agnor & Hamilton (2006)). Assuming that the ejected binary partner had a mass $m_3$, the three bodies would have had to have interacted at a distance $$r=a\left(\frac{3m_1}{m_2+m_3}\right)^{1/3}\tag{1}$$ where $a$ was the semi-major axis of $m_2$ and $m_3$. There shouldn’t be any issues with applying this model to the moon system.

This is a standalone scenario, but I realized that it is also needed to explain the formation of the original binary system in the first setup. It has the advantage that no third body is needed (and thus no other binary system is needed), but it has the disadvantage that a relatively narrow class of initial orbits will permit a successful finish.

The authors carried out simulations of three gas giant planets orbiting a star (some simulations involved two, while others had the third play a minor role), and found different results for different values of the inner planet’s semi-major axis: 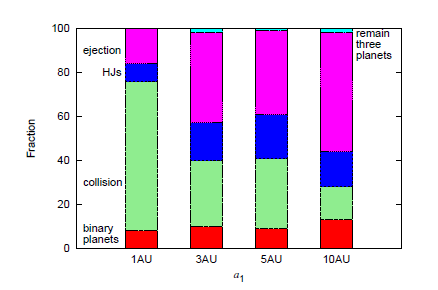 It is certainly true that long-term (or even short-term!) stability might be problematic, especially because of tidal interactions with the parent planet. However, many setups will lead to the successful formation of a binary planet.

All of this, of course, assumes that the less massive moon lies within the Hill sphere of the more massive one.

Not the answer you're looking for? Browse other questions tagged science-based moons .

1
What are the effects of having a planet with one moon being orbited by another moon
49
Moons of Moons of Moons
19
A moon that is hard to orbit
15
Could a moon have its own satellites visible from the planet it orbits?
3
Life on a moon of a moon
8
Habitable world orbiting a gas giant orbiting a gas giant
1
Real life physics of Having a smaller Moon orbit the Moon of a planet
1
Moon-moons of moons of rogue planets

27
Can you add a mini moon to Earth?
23
How big can a moon be where you can physically jump out of its orbit, to its planet?
13
What are the parameters of a planet having multiple moons?
3
Binary planet eclipses
7
Is there a plausible way to have a Gas Giant with two or more earth to mars sized moons orbiting it in the Habitable zone?
1
Moon-moons of moons of rogue planets
3
Could a "super-Enceladus" moon exist?
4
Two large moons in horseshoe orbit possible? What effect on humanlike life?