Get/Keep Air on the Moon!

We like the moon. It's close, you can see your home from there, low gravity well, so you get easy mass drivers to orbit for fleshing out your spacer economy, plus you can do fun things in pools. 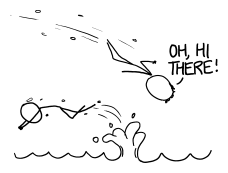 The only slight inconvenience is the fact that the moon is an airless, radiation-bathed hellhole with burning days and nitrogen-freezing nights.

Now, assume we can develop the technology (and the financial and political will to marshal the resources) to get an 4000m Earth-like air pressure (about 60 kPa) at Moon surface. I know that with the lower gravity, the moon's atmosphere would tend to disperse to a great distance, and that gases would be lost in relatively quick order.

To prevent that, I'm thinking of building a (set of) domes that would cover the entire surface of the moon, with laser point defense stations to blast away micrometeors and repairbots to fix any tears that might occur anyway.

My question is, what makes more sense from a realist perspective - going for domes to cover the entire surface or allowing for the air to spread out the vast distances, and constantly replenish whatever is escaping?

PS: Keep in mind that I'm not suggesting this as a first approach to the moon. We may well start out like rats in deep tunnels, and have robots prowling the outside for a bit. But eventually, I want my swimming pool to overlook the Earth.

EDIT: Note that a question about placing an envelope around a tiny asteroid already exists, but that question deals with essentially a tiny object (a few km across) with near-zero gravitational acceleration, so that yields completely different restrictions and results.

I wrote an atmosphere calculator based upon thermal (Jean’s Escape) with empirical fudge factors to increase the rates of atmospheric loss to more along the lines of what we see in the Solar System. It correctly predicts an $N_2$ atmosphere for Titan and no atmosphere for the moons of Jupiter.

Assume a human generation equals 20 years. We would only lose ½ of the water in the atmosphere in 200,000 years – meaning a non-technological society could survive at least 10,000 human generations (i.e. 1 atmospheric half-life for $H_2O$) without replenishing the lunar atmosphere.

For the atmosphere we will need:

Hydrosphere We will need excess water for standing bodies of water and icecaps. I will estimate the liquid water requirement by scaling Moon / Earth ocean mass to the ratio of Moon / Earth surface area.

Let’s assume our gases do not react with the surface of the Moon (probably a bad assumption but it makes life easier, so I'm going with it) so we don’t need to juggle those numbers based upon probable chemical reactions.

Finding the water and oxygen in our Solar System would impose no problems. However, finding this amount of N2 might be difficult.

Saturn's moon Enceladus (about 240 km diameter and $1.08 \cdot 10^{20} kg$ of mostly water mass) would provide the necessary mass. However, it would not have the correct ratio of elements. We'd probably have to scale up to a slightly larger moon and "crack" a bunch of water to release $O_2$ into the air. We could use the $H_2$ as propellant for moving Enceladus (or its replacement) so it collided with the Luna. I have no idea what it's $N_2$ content would be but would expect it to be deficient. 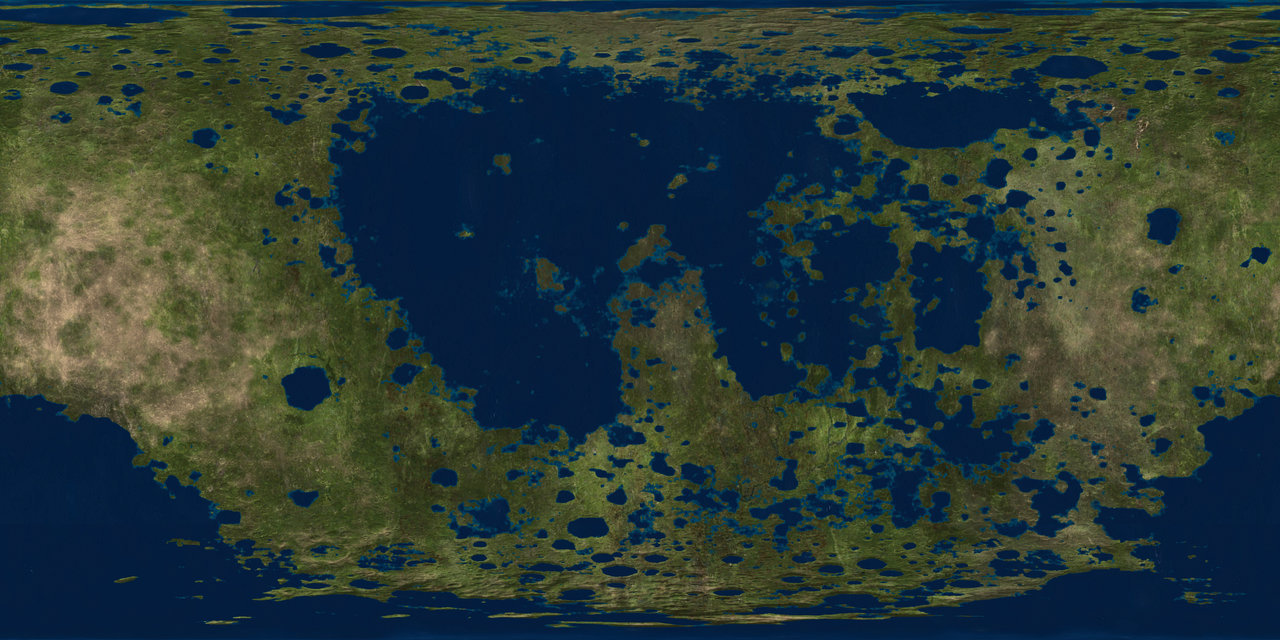 Most of the land would be on the so called "Dark Side" of the Moon facing away from Earth. Most of the region facing Earth would be a giant ocean.

Given this atmosphere density and Lunar gravity, people should have no problems flying by putting on some specially crafted wing sleeves and flapping their arms.

Imagine mansions situated on Lunar peaks. Physically fit people would visit their neighbors by putting on their wings and flying to the next peak over.

People could run across bodies of water without falling into them (surface tension could hold them up).

Despite the lack of a strong magnetic field, this idea has the added benefit of providing plenty of radiation protection. The added mass of air (6x that of Earth) means that colonists are well protected from radiation.

Forget it. In an effort to have earthly atmosphere on moon, you are going to steal off and invest all the atmosphere of your home planet and put it there :@. Things are still not going to work so well, though. Most of moon's atmosphere will be robbed by earth (yeah, it ends up, where it started from!) and some might be blown off by solar wind towards Mars or Jupiter.

If we begin by heavier gases (C02 would be a real good start), we can wrap moon in a layer of atmosphere which is held strongly enough (due to its high density) to not disperse in the vastness of space. We can then begin to add other gases slowly and notice the weekly blow-off. If they stick, we might expect an earth-like atmosphere there soon. Except that the lunar atmosphere would be 50% C02, 25% Nitrogen and 25% Oxygen.

I wanted to add even heavier gases like Chlorine, but then I realized people there won't want hydrocholoric acid to form in their eyes and lungs :(

Check out Wil McCarthy's novel To Crush The Moon, the last in his Queendom of Sol series, in which the Moon is shrunk to a radius of 1400 kilometres instead of its current 3500 kilometres (using very advanced gravitational engineering), which gives it a surface gravity of 1g, so that it becomes a more suitable prospect for long-term inhabitation. Difficult, but probably no more difficult than covering the whole Moon with domes, and you get a better surface gravity as well (although a much smaller surface area).

Edited to add: I forgot to mention that shrinking the Moon also gives it a better length of day, about 120 hours (five days) rather than 28 days at present.

Domes are a more sensible way to go: not least because you can live in the domes while continuing to expand. It's not an all or nothing proposition like adding atmosphere. The initial domes will cost a lot, but once they're up then you haven't got as much to worry about with the atmosphere. I'm assuming current level technology for getting air to the moon, so you still have a lot to worry about, but it isn't as much as it would be if you had to constantly dump air in to maintain the air pressure at livable levels (though you might be able to do something with the gas mixtures to keep everyone out of the death zone for a while longer).

The other advantage to domes is that you can build in other forms of protection. You noted point defence for micrometeors: but with a dome you can actually start to ignore small threats completely. You can also build in sunshielding, or add faraday caging and electromagnetic field generators to stop your occupants from being cooked by the various other stellar radiations that keep scouring the surface. Again: You don't have to come up with a full- lunar radiation defence straight away: you just need to shield the domes that people are using.

Other advantages include being able to shut down domes you're no longer using to conserve/reclaim atmosphere and power, being able to isolate sections in case of catastrophe or disease, and having total control over the climate. Oh, and did I mention that because you've got a hard ceiling you need less atmosphere to maintain your ideal pressure in the first place?

All things considered I can't think of a reason why a a civilisation capable of dumping enough atmosphere on the moon to make it habitable wouldn't build domes instead.

Rather than attempting to dome the entire Moon, consider doming just the craters. Start small and work your way up to the big craters as you build experience with the process.

This has added benefits as described below

The Moon's surface is a harsh environment. The radiation levels are higher than on Earth and during certain solar events, they become lethal. Any lunar colony will require radiation shielding. Most people envision this as burrowing under the lunar rocks and living in tunnels. However, there's an alternative.

Embed that water between a sandwich of durable but clear plastics (perhaps in a honeycomb shape). The total weight of the dome is less than the atmospheric pressure under it trying to blow it off. So your dome will be in tension (not compression).

You still have access to the lunar interior via tunnels you make in the crater walls but this way the lunar colonists will have green spaces were they can enjoy the sunshine without fear of frying their gonads.

Not the answer you're looking for? Browse other questions tagged reality-check space moons .

4
Why would anyone consider terraforming Mars, considering it can't hold onto water vapour?
4
Effects of Lunar gravity on animal life?
4
Can I put a sphere around my asteroid?

12
Can a moon "skim" a ring?
23
How big can a moon be where you can physically jump out of its orbit, to its planet?
2
Elevator to the Moon
5
Tidal forces of tidally locked moon orbiting a gas giant
16
How to flood the entire lunar surfaces?
5
Could over-colonization throw our moon out of orbit?
10
The impacts of the Moon's limited gravity on the design of a Moon city's transportation network
4
No More Looking from the Same Side of a Mostly Liquid Surface Terrestrial-based Moon
22
Always a full Moon for the Emperor - Can this be achieved with solar panels and LEDs?
6
How fast would the Moon (Luna) need to rotate so that anyone living in Lunar underground habitats would experience Earth-like gravity?