How do old people sustain themselves?

I thought there had to be a question like this here, but I didn't find one so I figured I would give it a shot.

Within my Dungeons and Dragons campaign I invented a tiny village only with about a dozen houses and maybe twenty to thirty inhabitants, all of them of quite to really old age, assumingly between 60 and 99. The village is very poor and currently there is only one younger inhabitant, the son of the innkeeper, that does all the work around the village, like doing repairs and fishing and stuff. His only reason to keep within the village is to care for his father. But as his father might (wink) die soon, he is likely to leave the village soon after. So my question is, how will the rest of the townsfolk keep themselves alive, if no younger, more viable workforce is around?

Some information about the setting:

I considered the following:

The town is in possession of a small vegetable garden, growing basic food like some tomatoes or lettuce, but working there requires vitality that most inhabitants do not have anymore, however, a little garden (presumably about 100 to 150m²) would not be enough to nourish two dozens of people.

I figured, that old people would never be able to perform some successful hunt for deers or the like. Maybe, as the village is located next to a lake, they could catch some fish with fish traps. But would the strength of a group of retirees suffice to handle it? Also, the village is in possesion of a small pig-enclosure but again, slaughtering them would require quite the effort I guess.

I guess that probably the most promising thought would be to keep the Inn going. Passing travellers could find a rest in the old Inn and would bring valuable money. A travelling salesman passes by every two weeks, so they could buy some goods from him.

I fear that the only reasonable way to keep alive would be for them to migrate to another town or village nearby, but I would love to find some way for them to stay at their beloved birthplace.

To give you some impression, here is a kind of map/image I drew of how I imagine the town to look like: 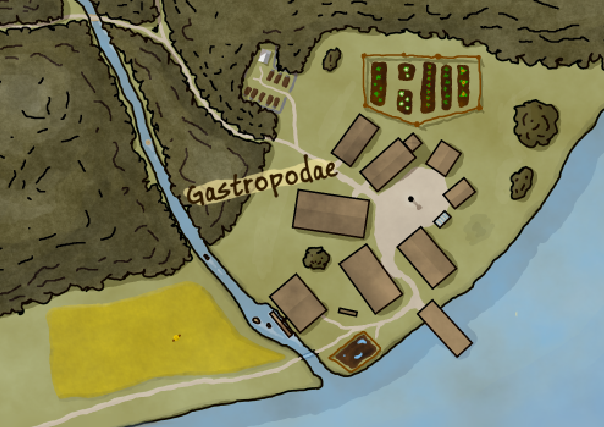 Why are there no more young people?

The village itself is quite apart from bigger cities, so the younger population left to the bigger seaport towns in the south, to find more people of their age, seeking for like-minded friends and possible mates.

Another reason might be the increase of dangerous creatures in the forests that happend after some (I don't want do spoil to much, in case one of my PC's might read this post) dark incident. Some of the younger folk might have felt adventurous and tried explore the forest, died due to attacks of infested goblins, or search revenge for killed or injured relatives, stolen goods and the like.

The Powers of the Eldest

As requested, I have put some more thought in the character of the villages eldest. Conchifera Archae is the head of the village. Her real age is unknown, but due to some elvish roots, she is much older than any other inhabitants of the village. Rumors go, she might be more than 200 years old, but nobody can assure and she keeps it secret. Her character is best to describe as generous, patient and very wise. To be more technical, her alignment is somewhere between neutral and lawful good. Classwise, she has druidic traits. Her magical powers can be well pictured by the following druidic cantrips (taken from D&D3.5 SRD) of which she can cast one per day. (If anything contradicts the rules in a major way, feel free to tell me, as I am still learning how to play, but stay focused on the main problem, as this is not https://rpg.stackexchange.com/)

I am willing to take additional abilities into account, as long as they do not seem to much overpowered. Think about what magical powers your granny would have, if she could ;)

You need goats. Pretty docile, and can be easily trained to stay in a location / feeding route and return home (no shepherds needed); also fairly resistant to predators (Billy goat gruff vs. troll). Milk is easy, as is shearing. Goat slaughtering is more difficult, but can be done. Especially if you have cantrips to clean up the area / not leave the stench of death in your single-file race when you cut their throats.

Pigs can get big, and can forage in the woods (truffle-hunting), depending on the type of trees (nuts) and other things available.

You're overlooking getting a custom charm animal spell (druid or ranger default), which would aid you in getting your pig docilely in a chain noose on a crane ready for slaughter.

Your river/creek is awfully straight, which implies an elevation change. If it were more meandering (flat terrain) as it got towards the lake, maybe there would be a section of forest that's mostly contained that could be control burned off. If you can kill off the trees, you can do some scatter seeding, without plowing and make some fields that you can let your pigs and other livestock forage in.

Orchards would also be great use of labor vs. return, especially if you can a cantrip or something to bring down/drop the ripe fruit/nuts on command (ie: no climbing). Orchards are typically where you get the raw materials for liquor; plum brandy, etc, etc. Running a distillery wouldn't be bad either.

Biggest problem you're going to have is shelter. House-raising takes quite a few strong people. But your housing can deteriorate around your village's ears, as long as the weather and animals don't do a number on it.

Fishing can be great, especially if you've got the right equipment - winches to haul in some nets - AND no competition, nor over-fishing. Boat repair may be a thing. But if you had several boats, and only a couple in use - any that are down for the count could be left until a repair guy comes along.

Why would anyone come along? Cash money. What you need are some trade goods. And I'd suggest magic-item components. Your garden should be herbs, that most people can't grow, but that your elven ancient knows how to tend/make prosper (cantrip to prepare the weekly fertilizer (human bone?) required for growing? special soil? needs fish byproducts as well as whatever? constant tending: boring/tedious that young people hate to do?). Basically make it something that's hard to replicate for the PCs, and not something that's so common that everyone in the world can do it, and they've got some trade to generate money. Then they need to get it dried/prepared (low strength tasks that old people can do), then they're shipped off to that traveling salesman (why else is he coming along so often?).

Pluses: you can pay off the PCs with a bunch of their preserved stock (vs. only a few coin). Now the PCs need to take a cart-load to the city, negotiate a sale, or save it for their own use (where do you house it until you use it?). Plenty of hooks with that.

But yeah, if you don't manipulate something they're pretty much dead in the water. You need young people in a village.

If you've got income going into the village you also need a reason for the young people to have left. One way to do that is to link your threat to a curse on human fertility (maybe linked to the herbs sucking the vitality out of the area)? Or a limit on where/how housing can be expanded (maybe they're hemmed in by dryad, or treant protecting the forest from encroachment (but not use). If young people can't get land (or the land isn't worth anything), can't get (a share of the) income, can't have babies, they'll go somewhere else.

Before the modern age your "pension" was your children. You raised children and then they took care of you in your age in exchange for you helping with what you can (for example caring for grandchildren).

In this situation though it's not sustainable. All the younger people have gone and the older ones will cling on for a while but then gradually that becomes unsustainable.

Soon enough everyone either dies or leaves and you have nothing but a ghost village.

Sorry if that's not the answer you are looking for but unless they can tempt more younger people back then it's a failed settlement and everyone in it will either leave or die over the next few years. A few decades at the most.

Not the answer you're looking for? Browse other questions tagged society humans food .

8
How can vampire-dad be popular when he has to stay inside during the day?
51
How to conceal my immortality without hiding for a hundred years?
3
What could a non-expert blacksmith from a small village do to secure a job in a city?
30
What city and town structures are important in a low fantasy medieval world?
7
Can a person whose brain was 98% destroyed but then recreated maintain some of their memories?
13
Making a Functional Village out of Candy