What non-metallic materials would allow making guns and bullets?

In my setting, metals (including common metals such as tin and iron) are a rare commodity. Because of this, humans have to make weapons such as firearms (guns) with other resources.

In order to get to the level of technology that we are at today, humans have discovered how to create and manipulate buckminsterfullerene (aka buckyballs) in order to make electronics such as computers.

Guns are still made by propelling a bullet with an explosion (as they are today), so brittle materials like wood won't work.

In short, what could guns and bullets be made out of if metal couldn't be used?

This is doable, but difficult. See this reference. This is a non-metallic fluorocarbon resin bullet. During testing, it apparently blasted a "four-inch diameter hole four inches deep" in a target designed to simulate a human. I think this is at least a proof of concept that non-metallic bullets are both possible and usable. One suspects that if ordinary bullets were not already perfect for their most common uses, research in this area would already have produced something more mainstream.

As for guns, plastic guns are already both feasible and tested. You can even build one at home, though I certainly would not recommend it.

In short, yes, with modern technology humanity could probably manufacture a non-metallic gun with non-metallic bullets.

In a metal-less world, you'd start to see the rise of crossbow type devices which deliver nearly the same damage without using explosives. If you insist on having guns with explosives but not metal, and it's a sufficiently advanced society, they might use some kind of composite plastic like carbon fiber. The 3d printing world has shown us that you can make firearms without metal, they just don't last that long. Given enough time, stronger composite materials would be created which could stand up to requirements needed for firearms.

https://skeptics.stackexchange.com/questions/7931/can-a-gun-be-made-from-ceramic discusses this question. The answer seems to be "not at the moment, but people are working on it".

A world without metal but with modern-equivalent technology would have put a lot of work into ceramics and glass. All of the effort our current civilization has spent on metallurgy, in fact. They would probably start with a stone cannon and work on reducing its size.

A more fundamental question though: what is the planet made of? Note that both human and plant biology depends on trace metals, and most rocks have a lot of silicates in; if you can make a silicon carbide crystal of the right cylindrical shape you can use it for the base of the gun barrel and make the rest out of ceramic composite around it.

I simply don't think you would get guns as we currently think of them. Explosive propellant is too heavily linked to metallurgy.

What I think you would get instead is crossbow style and rocket launcher style. Fireworks are an old weapon of war - predating guns by quite a large margin. Tube launched fireworks seems a more logical direction.

And perhaps evolving rifling, guidance etc. perhaps earlier in the process, simply because of the nature of the projectile. Bullets need to be pretty simple, because of the concussion of firing. Missiles can be a lot more complicated (and may need to be, because initial velocity changes their usage significantly.)

You mention using buckyballs for computers. That same sort of technology might lend itself to guns made with other Carbon Allotropes.

Graphene could be used to provide high tensile strength, containing the explosive force with very little weight. This could be augmented with other, non-metal materials to provide rigid strength.

Bullets could use Diamond or Lonsdaleite to provide a strong, penetrating material. Casings would be open graphene balloons.

For single shot "zip gun" type weapons, almost any material can do. Indeed, with the restrictions given, it is difficult to imagine a firearm in the sense that we know today as being possible.

To make a modern "repeating" firearm, the challenge is multifold. The chamber needs to contain high pressures and high temperature gasses. The cartridge case is made of brass in modern weapons since it can expand slightly during firing to create a seal in the chamber, and its ejection helps remove a lot of heat from the chamber and weapon. It also helps that the metallic cartridge also mechanically protects the round and propellant in storage and in the magazine as well. Polymer cartridges have been experimented with (Notably the LSAT program), and caseless cartridges have also been developed (notably for the HK G-11 rifle program), but with limited success to date. 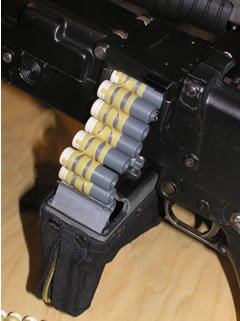 LSAT cased telescoped polymer ammunition as developed for a machine-gun 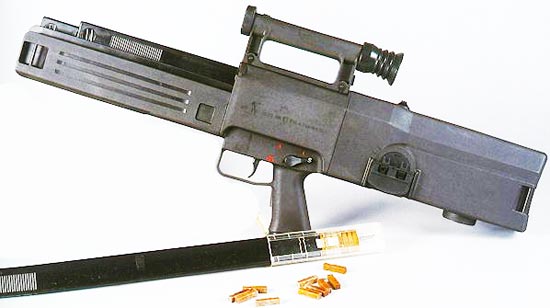 HK G-11 with 50 round magazine and caseless ammunition

The next challenge is to have a barrel which can handle the severe forces imparted by having a high speed projectile passing through it, along with heat buildup and mechanical strength to deal with soldiers bashing it in the field. Ceramic barrels might have some of the properties desired, but ceramic/metal composites seem to have the sorts of material properties to make an "ideal" barrel. Lacking metals, a ceramic barrel with a high strength material "wound" around it should have most of the properties desired, at the expense of a complex manufacturing process. The Carl Gustave M-3 has this on a larger scale in an 84mm recoilless rifle, but the rifled liner is still steel.

So the short version is firearms the way we understand them are going to be exceedingly difficult to make without metal. There are some possible substitutes, however.

Rocket projectiles have been around since ancient China. Using cardboard tubes filled with gunpowder attached to an arrow provides a simple yet effective projectile weapon, which can be fired from a crossbow like weapon individually or from a multiple rocket launcher to bombard an area with arrows 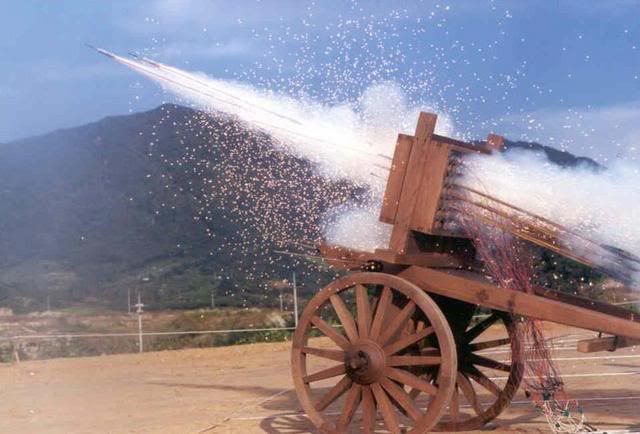 A more modern variation was the Gyrojet rocket pistol and carbine, using a .45 cal projectile powered by a tiny solid filled rocket motor. Oddly enough it was quite safe at point blank range (you could stop the projectile by putting your thumb over the barrel), but became increasingly dangerous as the rocket built up velocity. Accuracy was ensured by having the rocket exhausts angles slightly to impart a rotation on the projectile as it was in flight. 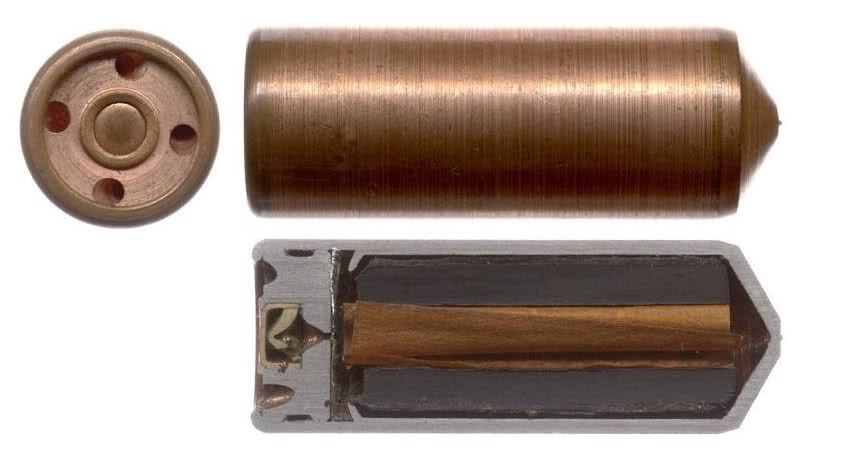 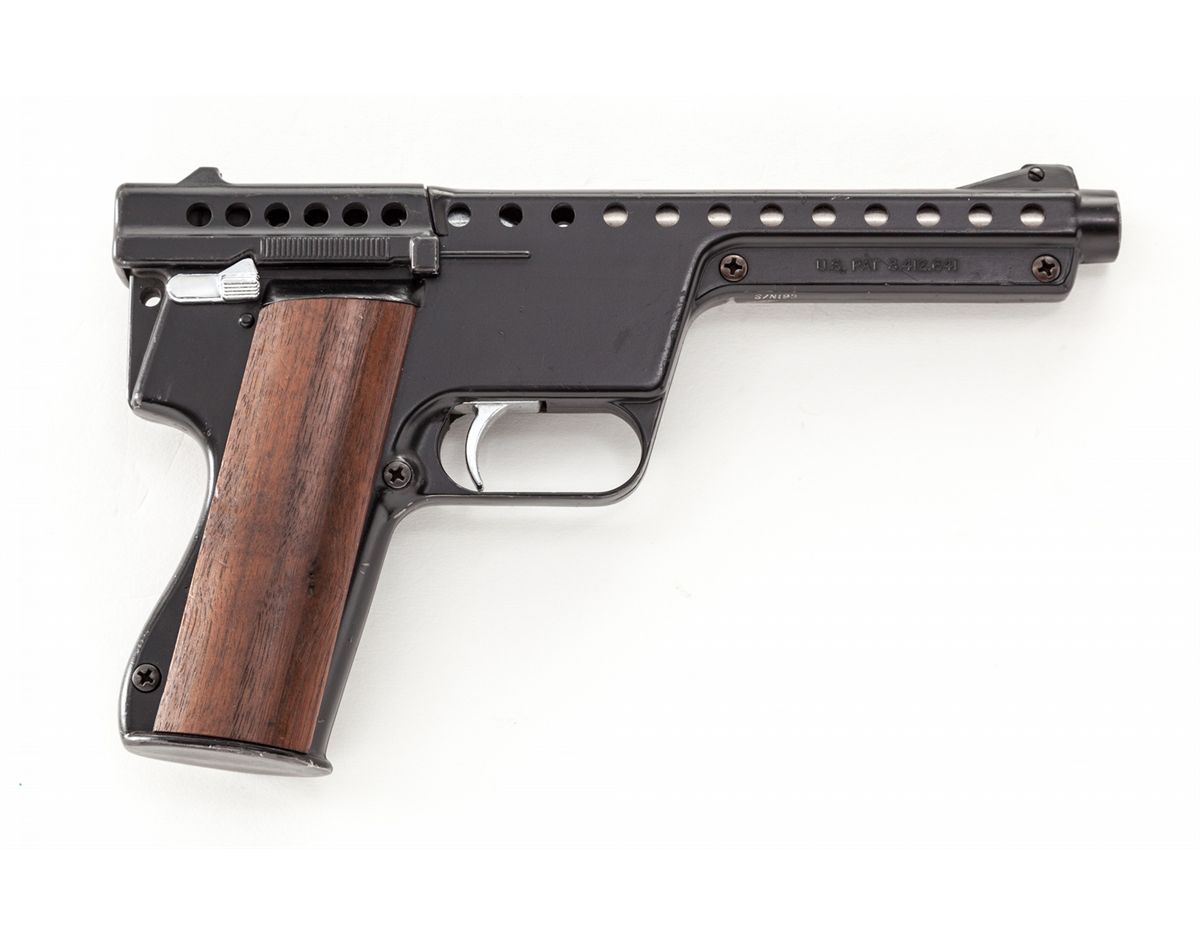 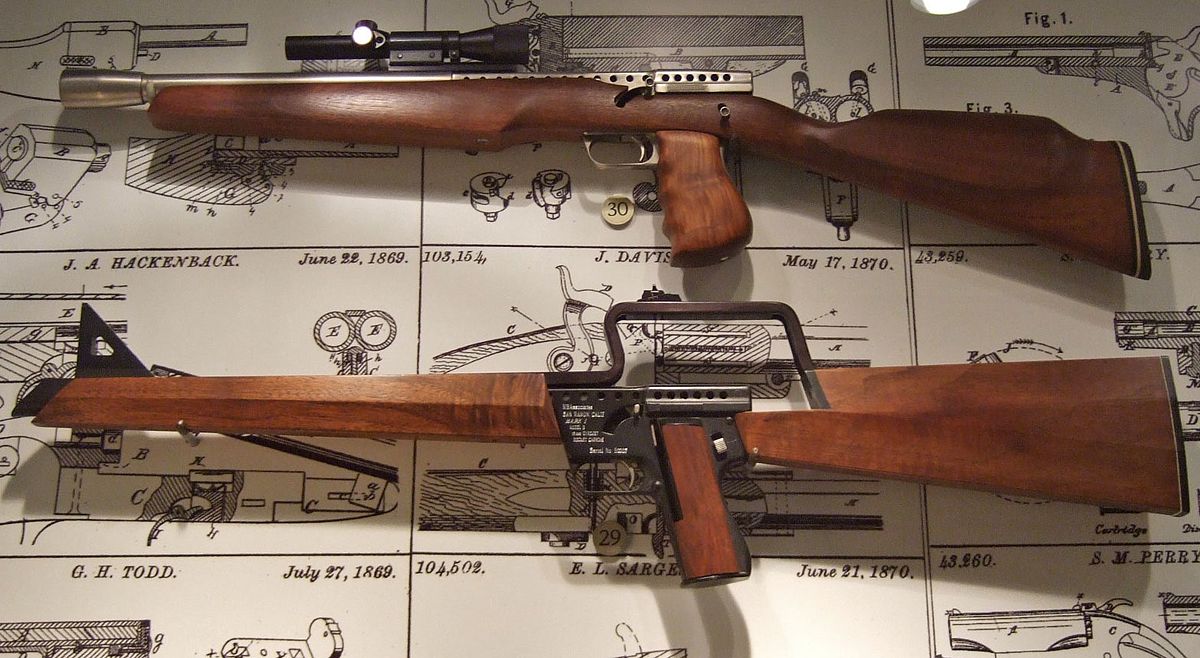 The pressures inside the weapons are much lower than a conventional firearm, and they can be made of virtually any material (the historic ones used aluminum, but in principle even a plastic barrel would do). Polymer and ceramic could conceivably make a modern Gyrojet, should anyone be interested in reviving this, or for the purposes of your story set in the "modern" age.

This video shows a successful firing of a Mk2 pistol, and you can see the rocket spinning the round.

Bullets don't always come with casings. There are both modern caseless rounds and ancient muzzle-loaders (possibly with paper cartridges).

Jonah mentioned the modern 3d printed gun experiments. One might combine those with a muzzle-loading design and a non-metallic bullet.

That leaves the question of the initial spark. Caplocks and flintlocks use metal, so how about a matchlock?

There have been caplock revolvers, so a crude multi-shot design might be possible for a matchlock as well. Perhaps a pepper-box-style gun rather than a single-barreled revolver, or at least a double with fixed barrels.

The answer would depend heavily on how gun like you want your non-metal guns to be. The Hwacha (the MythBusters did an episode on It) looks like a good starting point for a non metal gun, reducing the size of the arrows, and developing an automatic reloading system. It might look something like the Gyrojet guns developed in the 1960s.

Not the answer you're looking for? Browse other questions tagged warfare firearms .

-5
Would a full plastic gun work?
16
Warfare without Metal
7
Would glass bullets be feasible in a hypothetical world?
1
Sustainable firearm production?

54
Wooden sticks are the only allowed weapons in a technological society - how far would these weapons have progressed by now?
6
How to build a fortress on a floating island?
34
How can I make guns available, but not swords?
21
Non-Metal warfare
8
Could a mass-proportional physical speed limit on projectiles "nerf" guns but not ruin archery?
2
How would projectiles used in my magic gun look like?
10
The limitations of Bronze firearms
1
Could möbius ring shaped devices deflect or possibly redirect bullets?