How do I populate a small, settled island for an RPG?

I'm creating an island on a medieval world with one large port city/town and roughly half a dozen smaller settlements on it. It's not too far from the mainland—several hours at most—but big enough to have a mostly self-sustaining population of its own.

Conceits of the Setting

I'm a role-player, and creating this island setting for running my players through a few adventures. I have no idea about population density, appropriately sized land masses, medieval-like city/town/village populations, and everything that follows from them.

Try Medieval Demographics Made Easy (MDME), an excellent article written specifically as a guide to creating the population distributions one might use in Fantasy Role-Playing. Here's an example of how to use it, with your "I want one port city" benchmark, to get the rest of the numbers you might like:

I need a city with competing bookshops, for plot reasons. Two, maybe.... Okay, then this city has a population on the order of 13000 people. Let's say it's the biggest city. This makes the whole island's population somewhere around 75000 people. Let's make it densely-populated, like a Sicily: 90 ppl/mi2 means the island's size is 833 mi2. Densely populated, small island should be pretty fertile (or else why keep having so many babies!) so lets go with each mi2 settled supports 250 ppl: 300 mi2 settled for about 36% settled, 64% wilderness. No other cities, just towns numbering a half-dozen or so. Call it a 20 mi$\times$40 mi rectangle and you're basically done.

(I just used the expectation values for all rolls called for in MDME and rounded liberally. You might want to tweak so as to get at your preferences. For instance, 2d4 rather than 1d8 for number of villages.)

Bonus Example, to illustrate how a different benchmark could play out: my island would take ten days to cross on foot. Okay, now we're a 240-mile diameter island, or ~45000 mi2. MDME gives me some guidance on likely densities; this is a backwater part of the empire, so I'll pick the number from medieval Britain, 40 ppl/mi2, giving me a population of 1.8 million. The Agriculture section tells me that about 10000 mi2 need to be settled in order to feed those people, so the island's about 20% settled, 80% wilderness. The Population Spread section tells me the largest city should have about 20000 people, another one around 10000 people, and there'll be about 18 towns ranging from 1000 to 8000 residents. &c. &c. &c.

Further Reading for your particular example: The Edge of the World: A Cultural History of the North Sea and the Transformation of Europe by Michael Pye, esp. pp.177--191 which give great detail of everyday life in areas dependent on fishing, on fishing vessels, and business practices related to the development of commercial fishing, &c.

Furthermore, there is a practical calculator available online here, sourcing from MDME.

This depends largely on your story.

For a large medieval town, you can reference almost anywhere, but there was a successful port town of Castelsardo, in Italy, which I seem to recall was an island, or very nearly. It had a climate such as you describe.

ALL of this is very generic, because the answer depends HIGHLY on more information needed in your question - size of the kingdom, availability of materials, trade routes, etc. These you may use to adjust these numbers.

I cannot say precisely what population density an island like that could sustain.

I'd suggest a town population of ~10,000 and a rural population of ~3000 (2000 + 1000) for the island. If it is an action game, you could place watch towers at some points. Also, don't keep the terrain all plain. In order to give archers a natural advantage in some places, keep v1 or v2 on higher grounds.

I could give you some ideas on the map of the island. Let the town be fortified with a wall and gates. Also, let i2 be a privately owned island by some villain in the game and i1 be a deserted small patch (where you can let your main character build his little base one point in the game). Have some adventure(s) where the hero has to travel from v1 to v2 but force a boat trip. 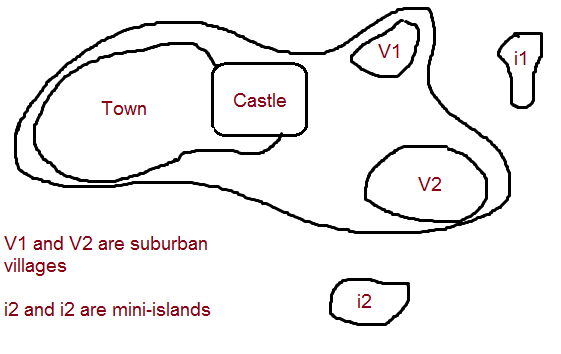 11
Horses for Absolutely Everybody, how it came to be
11
Size of a medieval/fantasy trading port
15
Which Natural Resources Go Where? (Medieval Fantasy Setting)
116
In a medieval setting, how far apart should towns be?
20
Medieval Setting - Castles Per Capita
7
How would an attacking army take a port city by surprise on land in medieval times?
2
Living on an Island - Minimal Population for Free Choice of Partnership
50
How to make this "friendly war" plausible?
4
I need help with the scale for an island
4
Is my town realistic?