Can a planet have more than one ozone layer?

Can a planet possess more than one ozone layer? Can multiple ozone layers cause more harm? If one ozone layer had a hole, would the other(s) act like a backup shield to harmful rays from a star? Assume the star is similar to the Sun and the planet is habitable.

Yes, in fact we have an extra one right here on Earth. Mostly found in large cities, we call this layer smog. It's pretty harmful, because it's not at the right altitude. At sea level, it's just a pollutant. Here's a nice picture showing what we have: 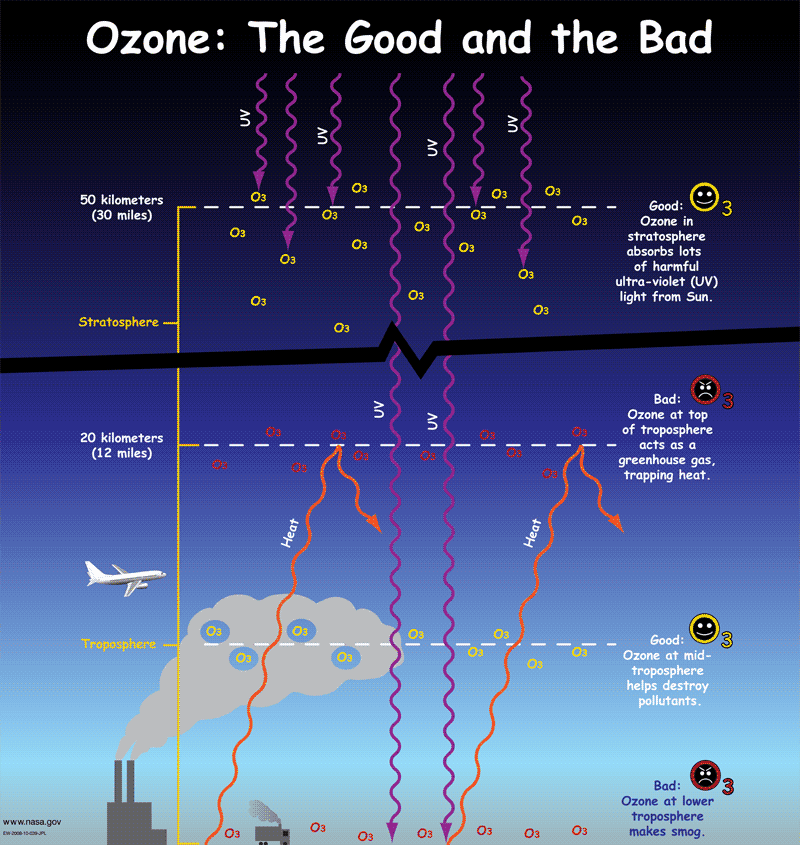 Here's the NASA website I got it from: http://spaceplace.nasa.gov/greenhouse/en/

Note: there is no such thing as an ozone layer. What is called ozone layer, as if it were a sort of crystal shell high in the atmosphere, is actually a volume of increased ozone density, so that the density function with height behaves a little like this:

But ozone density is never zero anywhere. As per @Alpha3031's answer, you can have more or less temporary conditions in which you get ozone near the ground from photochemical smog, or near the border of the ecosphere, or anywhere in between.

So "more than one ozone layer" would imply a density function more or less like this:

Question 1: "More than one ozone layer".

Yes, but it's tricky

The ozone layer is actually a dynamic phenomenon taking place in a volume of space where oxygen density, ultraviolet light from the Sun and (photo)catalytic processes from several substances (e.g. chlorine from chlorofluorocarbon compounds) interact in a narrow range of ways.

So the greatest problem is having a high enough atmospheric column where the oxygen concentration is just right. This requires a shallow gravitational potential (the shallower, the best), which means a large, not so dense planet, and this has its drawbacks (technology as we know it is hugely based on iron and elements heavier than iron). Also, atmospheric pressure at sea level depends on the height of the atmospheric column.

Once we have enough oxygen in the air to work, we can pursue two different avenues. With reference to the ASCII graphics above, you either raise a second "hump" far enough from the existing one, or you spread the one hump you have, and drive a "wedge" in the middle to split it into two.

This phenomenon already happens in the atmosphere with normal ozone, which is one factor, together with atmosphere mixing, that makes the ozone layer "thick": it's actually several intertwining layers that scatter and amass. You'd need to do it with a different substance so that the separation between the two "humps" is larger, or you'd end up with a very thick, but single, ozone layer.

You could have some unknown process (high energy collisions, but with what?) generate unumseptium atoms in the upper atmosphere. Its reactivity against ozone ought to be frightfully high (update: it actually isn't, see Wikipedia), even with a half-life of milliseconds, and the small half-life could help explain the localization of the layer - Uup atoms don't wander far from their birthplace before alpha decaying.

Another more promising possibility, and one which already happens, is you have a volatile molecule where a sufficiently evil halogen is bound to something keeping it quiet. Then the molecule diffuses in the high atmosphere, and almost the same UV rays that produce ozone destroy it, thus freeing the halogen atom, which proceeds to destroy ozone before combining with water vapour or hydrogen or something else and precipitating away. This is what happens now with chlorofluorocarbons.

You might also imagine a large fleet of aircraft with some ozone-harmful chemical in the exhaust fumes (this also happens in reality).

Ozone layers do not cause harm per se. What they do is intercept radiation and either absorb it or reflect it back at the same wavelength or at a longer one ("greenhouse effect").

In the appropriate circumstances both phenomena might be either harmful or beneficial: think some organism that needs radiation at a specific wavelength, or a planet that would be too cold unless some of its thermal emission was bounced back to heat it a little more. The same layer would be harmful to the former and beneficial to the latter.

If one ozone layer had a hole, would the other(s) act like a backup shield to harmful rays from a star?

Not entirely. What would happen is that the depletion of one layer would increase radiation on the surface, but it would depend on the amount of the ozone shielding left. The layers are not "redundant", each one is there because of a specific cause.

NASA describes how ozone is made in a rather excellent paper on atmospheric chemistry. In summary, UV light hits an O2 molecule forming oxygen ions that bond with other O2 molecules to form O3, or ozone. Since it takes UV light to form ozone and Earth's ozone layer absorbs 97-99%, creating a second ozone layer would require a second UV light source that doesn't come from the sun. If a second major UV source could be invented then a second ozone layer could form.

As far our current knowledge of atmosphere and oxygen bonding types stands, no, multiple layers of ozone are not possible. But that shouldn't stop you. You could employ other ozone like layers for the same purpose. For example, try something like nitrogen ozone layer or carboxy ozone layer. These don't exist naturally yet but hey, fiction is fiction.

However if they were possible and present, then yes, the damage of one layer would be covered up by the layers underneath it.

Not the answer you're looking for? Browse other questions tagged science-based environment atmosphere or ask your own question.

8
How to blanket moon with a permanent atmosphere?
4
A bit more effective force field
5
Why would species leave the habitable zone on tidally locked planet to go live in the hot region of the planet and/or the cold one?
3
Solar radiation overflow
14
Can a habitable moon rely on the magnetosphere of its parent planet for radiation protection?
3
How can this habitable planet have a moon with a naturally occurring atmosphere?
10
What thickness of atmosphere and strength of magnetosphere would I need for a planet to have a deadly daytime and a hospitable nighttime?
8
Could a planetary nebula obscure the presence of a black hole/neutron star?
7
What gas can replace ozone as a UV filter in a planet's atmosphere?