Would an island-covered planet be possible?

Island planets are common in science-fiction, and we've even got a few questions about them in worldbuilding. However, I cannot help but wonder how, or if, they could form. On Earth, at least, our geological processes lead to the formation of lots of continents, and only a few islands, relative to their total surface area.

Would it be possible for a planet to form with no major landmasses larger than, say, New Zealand, but lots of islands? What sort of geological processes would form a planet like this, instead of an Earth-like one? Ideally, I'd like the planet to be inhabitable, as well.

Let's consider the processes that create islands, as well as those that create "continents". First, let's establish the fact that the Earth's crust is chemically different than its lower lithosphere and mantle. The crust is formed from lower-melting-point, lighter rocks, which melt and float to the surface of the lithosphere.

Now: what differentiates dry land from ocean? Obviously, it's the height of that chunk of crust. On Earth, our large oceans usually form at oceanic ridges, which are locations where two tectonic plates spread apart. This produces thin, low-lying crust. Of course, to maintain the size of the planet, there are plates being forced underneath others at subduction zones.

Typically, islands are formed from volcanic action. Volcanoes usually happen at the edges of tectonic plates. When one plate subducts under another, it heats due to friction, and crustal rocks melt and are pushed upwards, emerging on the upper plate. Hawaii is an example of a volcanic island that isn't located at the edge of a plate. Its volcanoes are the result of a plume of hotter mantle billowing up from near the core and creating a hot spot on the pacific plate. Finally, islands can be created when larger land masses are eroded, leaving separated harder rocks dotted around.

Continents are really just big collects of old, high crustal rock. They've clumped up and broken apart many times through Earth's history, basically following the tectonic plates wherever they go. As plates slide around, they begin to consolidate their clumps of crust, and large continents result.

So our question becomes: Which of these mechanisms can we adjust?

This has already been mentioned but I will put the idea in more detail. The whole idea of island planet does not depend upon one, but at least two factors.

Cratons are those innermost parts of continents which don't get flooded by seawater no matter how much the sea level rises. On our home planet, earth, primitive cratons appeared long ago. Some ... 4 billion years or so. These were pieces of higher ground which did not get submerged in the water when the primitive oceans formed.

Those primitive smallish pieces of lands were like large chunks of mud sitting on the mantle (the middle layer of earth). These cratons were not stable on their positions, but were rather moving rapidly due to the activity of the mantle those days. Those small islands (cratons) collided and some of them fused into each other permanently. These were the first proto continents.

There is another thing known as a subduction zone. It is a place where stuff from the crust falls back into the mantle. Subdunction zones are present where two tectonic plates are present and one is pushing the other down into the mantle. This is sort of like the planet is getting smaller. The overall effect of ocean floor spreading and crust subduction is that the planet neither gets bigger, nor smaller, but it's tectonic plates move around.

Geology Of An Island Planet

There are two possibilities for you for an island planet.

1- Earth-like tectonic plates with a higher sea level. This means your planet is just like our home planet, only the sea level is higher (the higher the sea level, the smaller and the lesser the number of islands). For this I present you a picture of earth during the cretaceous period (nearly 70 million years ago). 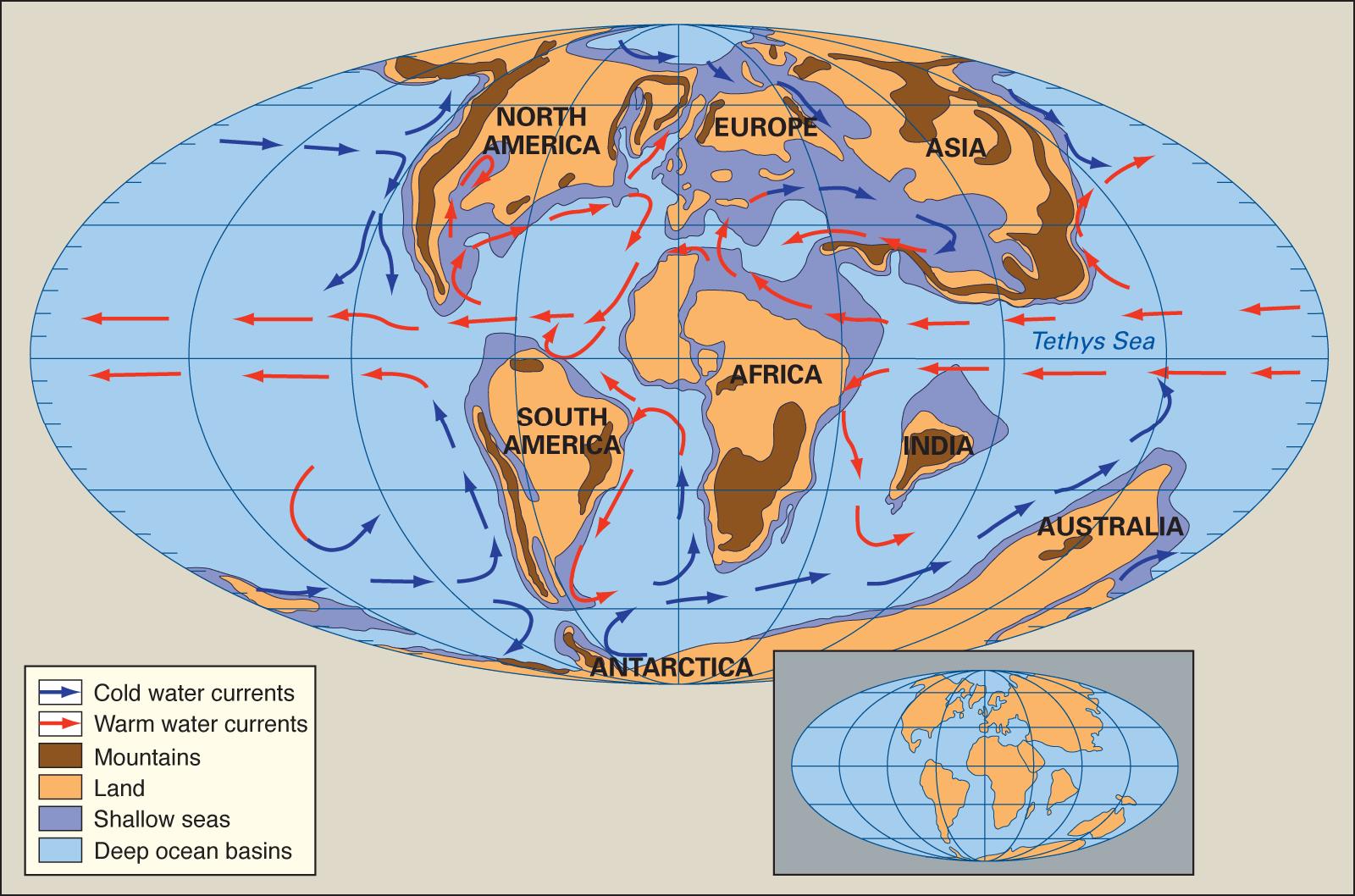 During the Cretaceous, the sea level was much, much higher than it is today. So a lot of what is earth now, used to be part of the ocean then. These regions are marked as light purple on the map which shows that this is part of land, covered by water. These are shallow seas with depth no more than 300 feet.

If you keep increasing the sea level, the purple regions would start increasing and taking up more of the land. This is one strategy for you if you want to have an island planet. The islands would swim about in the oceans (a few inches per year) but they would stay islands.

2- No active mantle activity. If you have a planet where the mantle is not as active as Earth's, then it is possible that the primary cratons never fused together to form larger bits (the first continents). For this, we need an ollld planet (some 5 billion years old). It needs to have an active mantle activity period in the past but now the mantle activity is dead (as earth's mantle would be nearly dead in around 500 million years or so). It used to be a fully terrestrial planet in the past (no oceans, all land) but then a massive storm of water-coments hit the planet and transformed it into a planet like earth: mostly composed of water. Now only the higher grounds of the planet are island and the rest is sea. These islands are not moving even 1mm per year and are stay put where they are.

If you take a page from waterworld, you could take various aspects of global warming flooding along with an older planet's erosion for a previously earth like planet to become more of an island planet. Perhaps the erosion was due to a previously acidic rain that wore away the features of the planet with greater speed (and gradually became neutralized due to terraforming efforts, or a species of life that used it for its metabolism, converting it to something neutral)

If you look here however

it shows that while large portions of the earth would flood, even melting all of the ice might not be enough to give you the effect you wanted.

You should also consider the reason we have (dry) land is plate tectonics, in which there is a floating cold "crust" on top of a molten sphere of metal, and various parts of that crust are being pushed and pulled around, raising certain areas of it out of the sea (which would technically cover the entire planet if the crust was completely smooth). Perhaps your planet could have a cooler core that was not as tectonically active? (this would perhaps translate to an older, or smaller planet)

Since oceans are basically just flooded lowland, If you added more water on the planet to begin with, only very tall volcanos or mountains could pierce the ocean. Or perhaps try a combination of these things!

Not the answer you're looking for? Browse other questions tagged reality-check planets geology or ask your own question.

52
Creating a realistic world map - Landmass formation
2
Is it possible to prevent colonization from the sea of one hemisphere from another hemisphere?
33
Can airborne floating/flying islands be scientifically possible?
16
Naturally-ocurring Airborne Floating Islands - is it possible?
16
How quickly can I form a mountain chain?
2
Plausibility of a planet with independent city-states instead of countries
21
What would it take for an island to sink and rise yearly and naturally
23
Realistic geological and chemical composition of an edible planetary surface
3
How to form a huge natural plateau with a slope?
2
Are my plate tectonics/land masses realistic?