I'm designing a Fantasy AGE campaign and there is one place in the desert between two big kingdoms. There is a way through the desert passing though several cities. They are mostly small and serve as trading outposts, but I want them to be bigger than that: to have tunnels ways through the sand and bigger cities under the sand itself, where most people can't get.

How deep should they be, what problems can characters meet because of the tunnels and undersand cities (like big hollows under the sand? I don't know, that's why I'm posting this), can that actually exist, or should I just say "FRIKKEN MAGIC!" and don't even bother?

If I'm picturing what you want correctly, here's what I would recommend. The source for the underground bit is from when I was an urban planner in the middle east.

Your settlements should be no further than a two or three days trek by camel/caravan. While you can go further, some of your perishables (dates, fish from the sea, camels milk) should be kept in a cool place, and by day, the further from the sea or your two mega-cities will get very hot even in the winter. You ideally want respite and water for camels as well after a couple days. Wayfinding for settlements much further apart gets difficult, if you're off by even 1°.

Water and sandstone can be found in just 3m depth in the Rub Al Khali. Sandstone is marvelously pliable (see this question). There are also many instances of troglodytes in desert areas, particularly the many in southern Tunisia and North Africa. For instance, Matmata has just a few entrances, but holds a whole warren of tunnels and dwelling units.

Your size of underground caves is up to you. However, keep in mind that you need access for materials in and out, including waste. The old oasis of Tozeur was about 700m x 700m, but you want yours to be underground of course. This is because the 5min walking distance from the central mosque is considered about 350m radius in planning terms. Presumably your central entry/exit could be the same - give your underground dwellers a 5min walking distance from the entry/exit.

This can happen. Because it has happened, thousands of years ago.

Take a look at the Derinkuyu underground city and its brethren. Room for 20,000 people, five levels, kilometer-long tunnels, &c. (Not much of a view, though.)

Here's a schematic from the linked article. (Note that the town above has grown up above the original cave systems.) 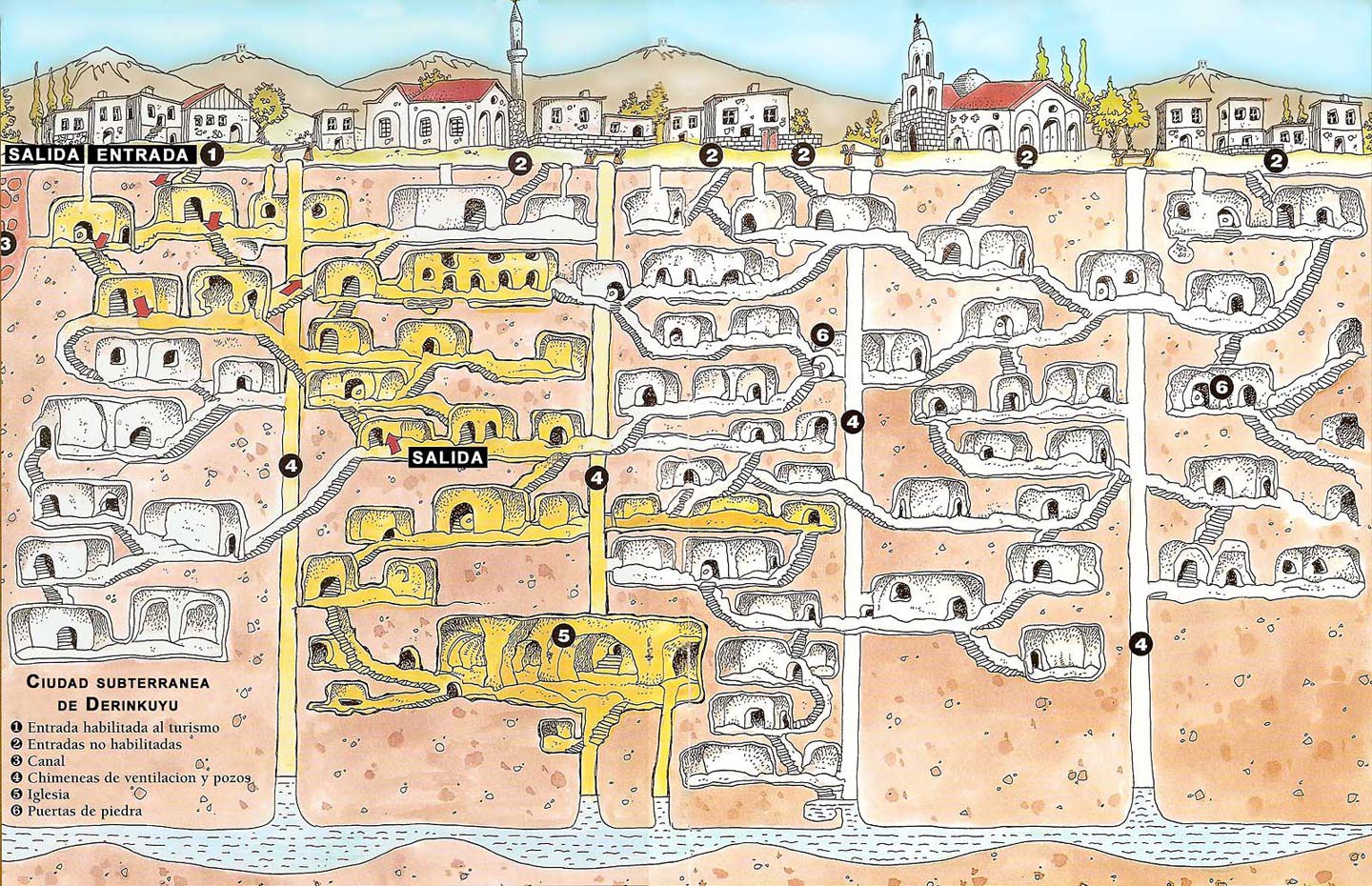 Not the answer you're looking for? Browse other questions tagged reality-check magic underground deserts or ask your own question.

16
How to minimize the threat of guns in present day magic fantasy
9
Ice and sand deserts next to each other
20
Is my river map even remotely realistic?
9
What would be the an avarage and/or realistic population density be for an medieval based city?
10
Diving into water to escape lightning attacks
3
Habitable low mass super earth and its habitable high mass moon feasability
7
Ways for magic and technology to coexist without affecting each other and the society as a whole?