Colonizing a fresh Earth : where to place the first settlements?

A God contest is organized. Each participants starts with a human-free alternate Earth and a certain amount of god-credits to buy humans and supplies. Some Gods used a big part of their budget to acquire Legendary Artifacts such as a duplication machine or a magical sperm bank, and others preferred to do go with the number and buy a lot of humans.

Judges evaluate the participants every hundred years and give to each god grades based on a lot of (sometimes contradictory) criteria.
Examples of criteria : increase of population, surface colonized, technological advances, originality of Arts techniques, efficiency of governments, weirdness of religions, complexity of languages, diversity of cultures, number of bananas eaten per day, etc.

Most contestants specialize in a few specific domains.

One god chose the "strength in number" approach and bought a huge bulk of randomly generated humans, with hunter-gatherer tech level, basic notions of agriculture and a few tools.

His goal is to create the most diverse possible cultures/civilizations in one thousand years. He is looking for a set of locations where hunter-gatherers would survive and multiply, and that are different and distant from each other.

He already selected a few areas to drop off his humans :

(ugly) Map of the settlements : 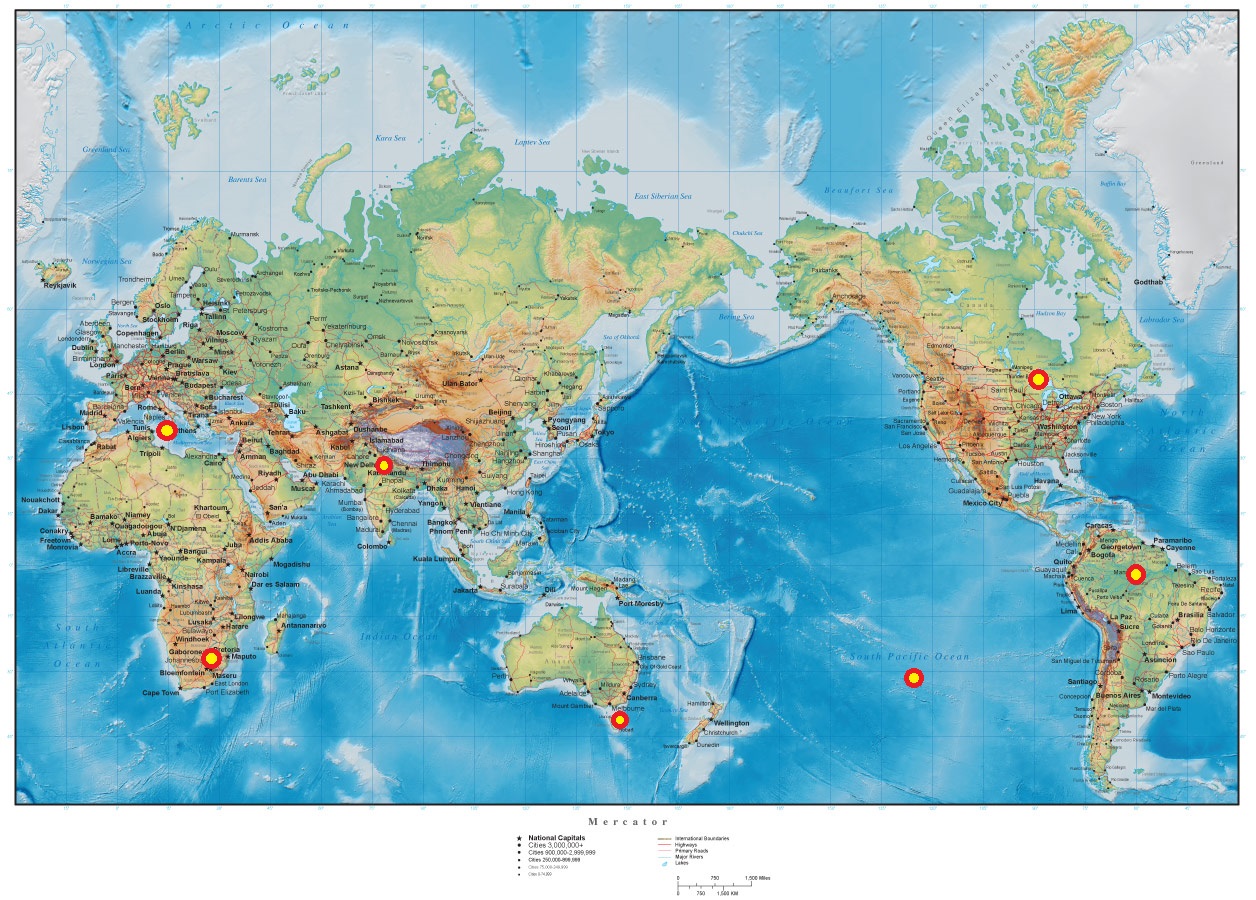 I'm trying to extend this list but every good location I find seems too similar to a location I already selected. At this point I need only one new settlement area.

What is the best location to complete the list ?

It should allow hunter-gatherers to thrive, be reasonably close to other colonizable lands, and be situated in a biome not yet present in the list.

The objective here is to diversify the cultures, which are strongly influenced by their environment, so I'm looking for a place with unique flora, fauna, natural resources, climate or geologic features.

Note : If you propose a list of places sharing the exact same features, I'll accept it as one answer.

How about a Steppe environment? The Tibetan Plateau would be a good starting point if you wanted a nomadic society, though I'm unsure as to how many people it could reasonably support if they were just dumped there (the same is true of all the regions you've selected though)

The range of weather and temperature conditions throughout the year would breed a race of hardy yet adaptable people, and while the geological region gives a few options for expansion (see: all of Asia) it's also remote and inhospitable enough that their culture would be able to develop apart from the rest of the world for a while. If history repeats itself, then you could end up with a horde of men on horses causing trouble for a while.

While the flora and fauna might be quite similar to Thunder Bay, the harsh conditions and sheer altitude should breed a completely different race of people. Oh, and Yaks. Lots of Yaks.

OK, lets start with the basic rule that all initial civilizations should begin around freshwater sources (rivers or lakes that is). In a world teeming with wildlife, hunting should not be such a big problem. Finding drinking quality water is the biggest problem your hunter-gatherer pioneers are going to face.

I have attached a map of where to place the 8 initial pioneers. Here is some detail. The points are numbered from right to left.

Plains terrain. Unique fauna and flora of Australia. Excellent for initial kangaroo and moa hunting and later shift to agriculture.

This island gets Kokuba, Nakama and Nakara rivers. A series of islands will ensure that this would quickly turn into a fishing civilization once the pioneers have hunted the island's edible fauna to extinction. A unique seafaring civilization, I must say.

Once again, an island civilization. But unlike the Okinawan pioneers, Borneo pioneers have a much better go at agriculture and the large Borneo Island can sustain hunter gatherer culture for longer. Furthermore, the region has a distinct (warm and wet) climate than the Okinawan region which results in tropical rainforests and an array of breathtaking beaches. Freshwater source is Kapuas River.

I prefer this over Ganges as the Indus Delta has more terrain variation than the Ganges Delta. Here you get forest, semi desert and completely desert environments at far lesser travel than you would, in the Ganges Delta. Furthermore, it is closer to the Himalayas series of mountains so that adds yet more diversity. No wonder Indus Valley civilizations predate Egyptian or Ganges.

This would be the best place to place your African civilization. The Nile has vast areas of forest and desert terrains and game is plentiful. Excellent place to begin spreading in the African continent.

Great place for the Polynesian culture and spreading into Europe.

This is the textbook-perfect place to begin the rainforest civilization. People in this region will probably never give up hunting permanently, considering the vast amount of game they find here.

The best place to begin the great plains civilization. Like the Indus Valley, this is a heaven upon Earth for the early settlers.

As soon as you want your society become farmers, i recommend you any place with very fertile soil.

Chernozem is one of the high ferile soil,a nd quoting wikipedia:

There are two "Chernozem belts" in the world: from eastern Croatia (Slavonia), along the Danube (northern Serbia, northern Bulgaria (Danubian Plain), southern Romania (Wallachian Plain) and Moldova) to northeast Ukraine across the Black Earth Region and southern Russia into Siberia, and the other in the Canadian Prairies in Manitoba. Similar soil types occur in Texas and Hungary. Chernozem layer thickness may vary widely, from several inches up to 60 inches (1.5 metres) in Ukraine.

Which and places marked as red on map, might be best for that kind of society. 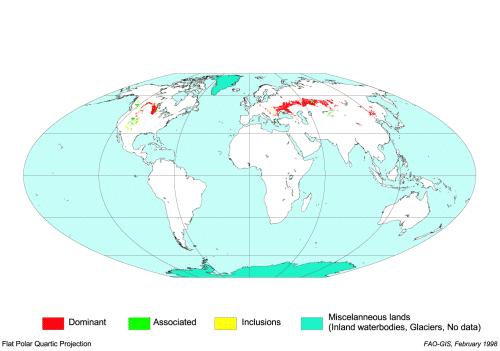 If it is full reboot, and we have similar circumstances when our civilization was created, i think it is worth to mention about places where sivilisation emerged in our world.

The Andes in Peru and Bolivia.

The climate is more diversified and generally more clement than in Tibet. It's close to the equator, therefore the region experience only small variations in temperatures over the year. And it has good rainfalls except on the western slopes.

It's in the mountains. That means a wide range of different climates, crops and cultures. This diversity might favor commerce as each pockets of settlements will have different crops, the incentive to trade is greater.

Not the answer you're looking for? Browse other questions tagged reality-check earth colonization .

17
Planetary colonization by a female crew
4
Colonizing Earth
8
Duplicating people to expand a civilization
10
What would humans look like if their evolution had been slower?

59
Where in the solar system is the most viable place to put my colonists, after Mars and Luna?
9
How long does it take before dialects branching from a single language become new languages themselves?
2
If all of the world's nuclear weapons were simultaneously detonated in one place, what would be the effect of this on the opposite side of Earth?
37
Colonizing the galaxy by slow boating reality check
21
Polar cannibalism menu choice: fit or fat?
18
Ringstadt: How sensible is my topography?
4
Colonizing Earth
52
Where on Earth is it easiest to survive in the wilderness?
3
Where would the first large Antarctic colony be?