As a series of anatomically correct myths, here we have the Nuckelavee. Is there a realistic way that Nuckelavee could evolve? Using Earth or near-Earth biology, how close could I get to the classic Nuckelavee? Is there a reason that a Nuckelavee couldn't evolve? To me the two heads and split spine is the major problem. You could imply that the horse head is just a glorified trunk. It's up to you.

Multiple pairs of eyes could also be beneficial, with the horse pair used underwater and the others to keep aware of things above the waves.

The nuckelavee could have evolved from an early warm-blooded crocodilian that, due to a mutation, had a large amount of dithoracic parapagus twins. This species would evolve to direct the development of these twins in a consistent way, such as with one thorax above the other. They might later move to the surface of the ocean. The lower individual would evolve to become more able to move through the ocean, whereas the upper individual might gain longer limbs to drag the body over the ground. The upper individual might also become more upright, to be able to see further. This uprightness would allow them to gain longer and stronger legs, allowing the creature to walk bipedally. The lower head might lose the brain, to avoid competition between multiple brains. The lower head might also become cyclopic and blind, as the eye is less useful. The lower retina might become bioluminescent, with the eye turning into a powerful photophore. As they would be slow on land, they might evolve to exhale toxic fumes out of their lower mouth, to protect themselves if they end up far from the water. This might lead to them spending more time on land. They might become omnivorous, and start to eat fruit. To get fruit, they may evolve to grab it with their feet. They might eventually come accross larger fruit, which would need to be broken to eat. This might lead to the head expanding to allow larger fruit into the body, as well as cheeks and crushing teeth to allow the fruit to be more easily swallowed. The travel on land may lead to the skin turning transparent and scaleless in aposematic display, as camoflague would not be possible. This might also lead to the more visible veins to turn yellow, and the blood to blacken, to make the creature more frightening. They might later move north towards the artic region, but could still migrate south in the winter. This evolutionary path could lead to a nuckelavee

As a matter of fact, there is a record of human Siamese twin sharing a body and having 2 spines and heads. https://en.wikipedia.org/wiki/Abigail_and_Brittany_Hensel

As for the mix with a horse, I think you'll have to consider something like "there is no limitation for species to have cross-species children" because frankly I don't think you can avoid supernatural physics for this Nuckelavee.

Stethacanthus, that prehistoric shark with that weird thing on it's head which we don't know the real function of, is almost like an evolutionary starting point for something like the nuckelavee. 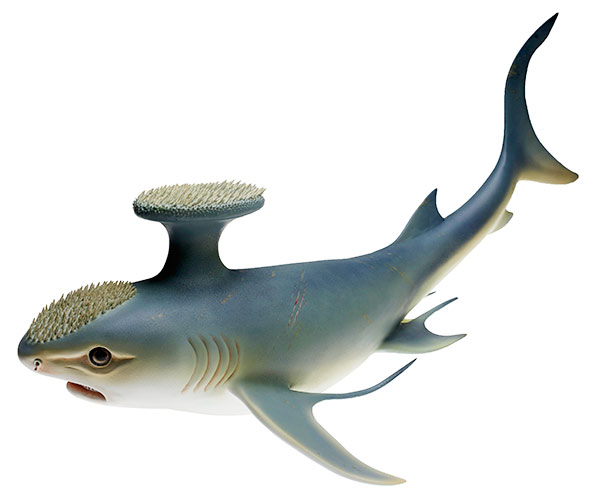 The skin is the main issue for a nuckelavee, as large parts of human anatomy, such as much of the skull, the eyes, the nose, the ears, the thyroid, the brain, and the teeth, are derived from the skin in some way. However, if the skin is lost later in life, such as by shedding it and not replacing it, then it is possible, but not plausible

Not the answer you're looking for? Browse other questions tagged reality-check creature-design evolution mythical-creatures demons .