How to justify evolving pointy ears that stick out from your head, on a humanoid

How to justify evolving pointy ears that stick out from your head, on a humanoid. 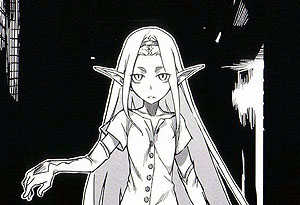 They can either start from the usual round-eared human(oids) with ears close to their heads, or have a different evolutionary path than humans, but in the end, they must end up being basically "humans, but with pointy ears sticking out.", in at least physical and mental ability if not coloration, skin, fur, etc.

Also, fully organic, no metal robots that basically just are wearing a skin-suit or anything.

It's required for locating sounds in the vertical plane and increased sensitivity.

Without pinnae humanoids could not localize sounds in the cone of confusion. The pinnae alter incoming sounds subtly in a way that allow us to determine the orientation of sounds. Two ears are required for determining the time difference between arrival times of a sound, which tells us which side of the head sounds are coming from, but without the pinnae, we couldn't tell much more than that.

They also act as a sort of funnel for sounds. Increasing the incoming sound pressure to the ear drum.

The evolutionary advantage comes from being able to tell if that predator sounds just came from above you or in the bushes below you. The different shape might allow increased distinction for localization as well as increased acoustic sensitivity.

Note that you will have to isolate the population somewhat for a significant period of time in order to have a particularly noticeable effect. This is a relatively minor change, but evolution is never fast.

If being able to carefully focus a specific frequency band of sound was critical to survival (avoiding predators or other natural enemies, or being better able to seek out a food animal), this would also preferentially select for a given ear shape and size.

Humans already are able to have ears halfway there.

In most people, protruding or prominent ears are caused by an underdeveloped antihelical fold. When the antihelical fold does not form correctly, it makes the helix (the outer rim of the ear) stick out. (ref) 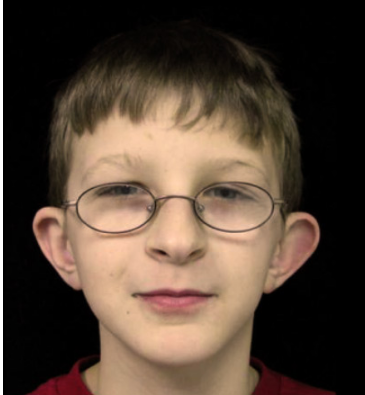 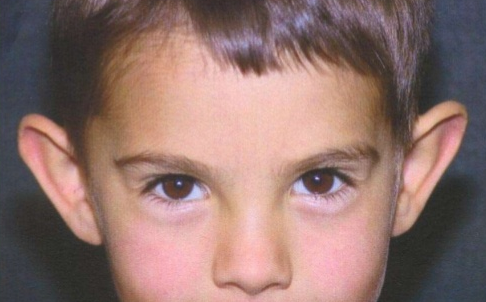 Ears that look like this work just fine. The only reason to "fix" it is aesthetic (children are often teased). Even the doctors refer to it as "bat ear" or "Dumbo ears" on their websites.

If you want an even less developed antihelical fold, it would be well within the limits of human evolution to achieve. Just select for it. Any reason that gives people with this type of ear more of a reason to reproduce will work. It can be direct (person is more likely to have sex) or indirect (people with protruding ears get all the best jobs and are therefore more likely to find mates...may or may not work in any given culture but...).

Elongating the helix is a more difficult change. But there is a genetic condition called Stahl’s ear (aka Spock's ear) that does this, pointy top and all.

Stahl’s ear is the result of misshapen cartilage. It is characterized by an extra horizontal fold of cartilage (crus). Normally, there are two: superior and inferior. In Stahl’s ear, there is a third horizontal crus. The helix (or upper portion of the ear) may unfurl, giving it a pointed shape. This gives the characteristic “Spock” appearance to the ear. (ref) 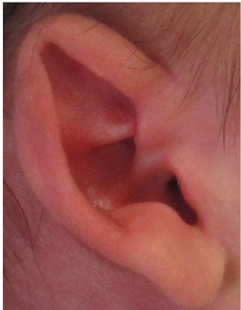 Again, there is no different in the ability to hear or anything else. It's all about looks. And looks matter. The ears you want can happen with just two changes to the standard ear. Select for these and you're golden.

But why would these be selected for? Other than considering them sexy (the sort of thing that usually changes in a few generations, if not sooner), what justification could there be for picking one type of ear over another?

And the answer may be, there's not much. Because these types of ears don't cause harm (or benefit) or change hearing, which type moves forward as the standard ear is more about the luck of the genetic draw when a group of humans is small and isolated then grows quickly.

Imagine an extended family (a few hundred people), where both these genetic variations are common, migrating to a new land. Then the people on the old land are mostly wiped out. The species continues to grow from the migrant group, incorporating a few survivors from other groups.

Add some sexual selection into the mix and whoa! elf ears!

Not the answer you're looking for? Browse other questions tagged science-based biology evolution or ask your own question.

0
Why would humans evolve pointy ears?
1
Ears as whiskers?

100
Would intelligent life evolve any other body plan than humanoid?
1
How would a strong humanoid heal from muscle injury
6
How To Create Your World WITHOUT Building From Scratch
4
Are there any outstanding factors that would prevent marsupials from evolving civilization?
8
How do I justify viral zombies not dying out?
8
How would eyes that evolved in air differ from our own?
0
Could a humanoid species, very similar to humans, evolve arthropod eyes? If so, how would that affect them?
1
Near spherical alien species - How can they move?
25
How can I prevent hyper evolved versions of regular creatures from wiping out their cousins?