What kind of VTOL engine could eject steam?

Here's the setup. You have a gigantic mildly futuristic city, where construction is vertical rather than horizontal. Need a new city block? Add another few floors. Disregard for the moment any physical problems this may present.

To move throughout such a city, we've constructed public transportation VTOLs - capable of going from the ground level to the topmost floors in a reasonably short amount of time. Aerial buses.

I would like these VTOLs to eject steam when they take off. And I mean a lot of steam. Picture what it looks like when a Rocket ship takes off. Smoke explodes outwards, covering everything. I want my VTOL to do that, though on a smaller scale obviously. It should eject enough steam to cover the surrounding area, and the steam should be relatively thick. 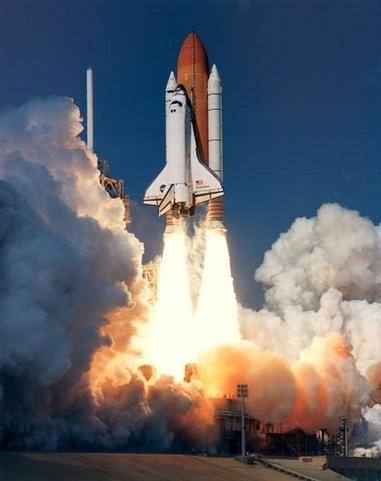 What kind of engine could achieve such an effect? I don't care how the steam is formed (by-product, actually steam powered, etc.), it just needs to be ejected quickly and copiously.

Note: My first thought was of a nuclear engine, since I've heard they form steam as a byproduct. This presents the problem of shielding however, not to mention what might happen in the case of a mid-air collision.

There are few plausible ways to form clouds of steam in a VTOL, mostly because of the amount of energy that needs to be generated by the engine(s) in order to take off and land. The exhaust will be quite energetic, and the steam (if any) will condense quite some time and distance away from the launch pad.

There are a very few work arounds that will provide a similar effect.

Firstly, you could have the municipal pads cooled and protected by a stream of water that constantly passes over them (or is flowing under the pad but is accessible via a flame trench). The hot exhaust will boil some of the water and it will flash into steam, but being cooler and less energetic than the actual exhaust, will tend to condense much closer to the scene of the action. While this is good for the pad, most designers will probably object since the steam will cause damage and heighten the possibility of corrosion both on the VTOL craft itself and metal structures surrounding the launch pad (including reinforcing beams in the pad itself). Taking off and landing in a cloud of steam can also cause problems for human pilots, and even microwave and laser landing aids could be "blinded" at a critical moment.

The other way to produce steam would be the cooling system of the vehicle. This would require an open cycle evaporative cooling system where the coolant is allowed to circulate and is then vented to eject the excess heat from the vehicle. This is problematic since the weight and centre of gravity of the vehicle will be changing constantly, as well as providing a very hard limit to the amount of time you can have power (once you are out of coolant, you will have to shut down or throttle back to idle to preserve the engines). Once again, the clouds of steam being ejected from an evaporative cooling system will have effects on the craft, the pad and nearby structures, as well as flight safety. IF you are not using distilled water, there are also environmental effects as well (boiling glycol is not something you want to introduce to the local environment, and undistilled water will clog the engine cooling system with lime and metal scale deposits, reducing the efficiency over time).

If you want to impress the locals, have take offs and landings trigger a light show or similar display around the pad. The people will think that is exciting (for a while) and the aircraft and local structures will not have to deal with the dangers of steam, corrosion or limited visibility.

Since a rocket engine that burns hydrogen and oxygen together to produce H₂O doesn’t produce enough steam for your purposes, you want anything water-cooled. It’s implausible that steam power would produce enough energy to justify carrying the weight of that much water, but maybe the launch itself generates enough heat that they keep a big pool of water around the first stage to dissipate it, and once the ship is launched, either it needs much less energy to maneuver or it’s in space, so it can just radiate all the heat it wants.

A specific example might be a mass driver powered by something that generates a lot of heat, so they built the launch tube under a lake.

With VTOL buses (vertibus) solely driven by thrusters you are a slave to a variation of the rocket equation, i.e. you need a lot of power to lift by thrust alone, you need big engines for that and those weigh, and guzzle a lot of fuel, so you need even more power to lift those bigger engines and the extra fuel.

I'd embrace the steampunk and have steam catapults (pic) provide the initial vertical push, while also charging something sufficiently steampunk, like a flywheel, on the vertibus. Heat up a big ceramic foam to red heat, add water, funnel the resulting steam into a big cylinder, which operates, with one titanic thrust, the catapult and the flywheel-stirrer (or the air-compressor, or whatever form of energy the vertibus takes). Overspill and the release from the cylinder will form a mighty cloud, from which will hurtle the vertibus - expertly/electronically piloted to touch down at the precise apex of it's arc soft as a down. Possible perturbations by wind or error are controlled by airfoils, thrusters and/or the rotational inertia of the flywheel(s).

Essentially a steam cannon with guided (and manned) munitions. The loading of the short-term energy storage gives you ample leeway to start the steam-show before actual liftoff. The cannon's length depends on what accelerations you think the passengers can stomach, and what height you want to traverse : https://www.desmos.com/calculator/on4xzwtdwz

To descend, the vertibus drops and uses the steam catapult to decelerate.

If steam is actually too Victorian for you, the catapult might operate with a magnetic coil, cooled with liquid nitrogen, which needs to be boiled off, because the coils get overclocked and need the extra burst of cooling at the moment of start/touchdown. The cloud will still be mostly condensed water, so the caveats regarding radar and visibility apply.

Real VTOL (excluding usage of scify-y stuff like antigravity) either needs thrusters or some (helico)ptery contraption, and it needs them during the whole flight. Thrusters go by F=m*a (resultant thrust is equal to the expelled mass times the acceleration of this mass), so you need to either move a lot of mass (which needs to be taken on the flight, requiring even bigger F, see the devilry of the rocket equation) or high acceleration of said mass, resulting in high velocity of the expelled mass - this in turn means supersonic gasses, which results in copious amounts of noise and mechanical danger. - (Helico)ptery solutions could be made silent, but that would require huge areas for the lifting surfaces, which might be impractical for city use (- also, no apparent use for fog...)

The cannon/catapult solution could be made virtually silent, and thus city-friendly, provided the vehicle never exeeds the speed of sound, limiting the solution to heights of a few hundred meters.

Imagine what happens inside a steam engine which has stopped its motion for a limited time. The machinery cools off, and steam condenses inside the machinery. A significant part of its working volume is now full of liquid water instead of steam, which at the very least changes the compression ratio, and at worst could cause a hydraulic lock, since water is incompressible.

The procedure, then, is to open blowdown valves just prior to starting motion. The water is blown out using dry steam, in an impressive cloud. If blowdown is done by a simple automatic mechanism, it has no conceivable idea how much liquid water is present, so it's going to blow for a worst-case scenario.

The hot, dry steam may also re-boil some of the water.

Now, temperature and steam pressure are proportional. It's bad to reduce steam pressure to zero on every cycle, because that also means a significant thermal shock for the machine. So there's logic to keeping the machine mostly pressurized at idle. Water's boiling point is greatly raised at pressure, so that liquid water we're ejecting is at 150-400 degrees C. When it escapes to atmosphere, it will spectacularly flash to steam in a classic BLEVE, adding a great deal more steam cloud.

Dry steam doesn't cause any visible smoke (in fact boilermen wave a broomstick ahead of them as they traverse boiler spaces, so they can detect jets of leaking dry steam capable of cutting the broomstick in half). But saturated steam (no hotter than boiling point), upon mixing with cool air, will rapidly condense to water -- and that creates the visible cloud.

Won't be any trouble justifying a big steam cloud every time the engine starts.

Not the answer you're looking for? Browse other questions tagged science-based technology power-sources or ask your own question.

2
How can I make a Nuclear Powered VTOL Safe?
1
Could a photonic engine actually work?
10
Could ships in space use a Steam Engine?
2
Feasibility of electrically heated steam engine
6
What would a medieval steam locomotive look like?
8
What kind of engine could the 14-15th century world create?
0
What kind of matter would be needed to maintain a black hole?
19
How could primitive people destroy or severely damage a very large very modern building?