To put it plainly, round coins just seem easier to make and work with. Because casting is a pretty complicated and energy-intensive process, coins would usually be stamped instead.

I have here a period illustration of mediaeval minting from the church of St. Barbara in Kutná Hora. What you see on the bottom two pictures is the forming of the blank and stamping of the coin, respectively;

The blanks were cut out of a hammered rectangular sheet of silver by the expedient of holding the sheet over the edge of an anvil and striking it with a hammer (bottom left). This would initially produce smaller rectangles; their corners would then be cut off in the same fashion to produce a round blank.

On the right, the mintmaster is stamping the coin. The (steel) stamp has two parts, both negative; one attached to the anvil below, and the other on a hammer-like object held at the top. The top would be struck with a hammer - you had to do exactly one powerful strike to get a clear imprint.

The reason why round currency was preferred likely have to do with the stamping; it is easier to line up round stamps than rectangular ones (if you misalign them, the images on the rub and the obverse will be slightly rotated relative to each other, but edges are still in the right place), as it is also easier to make them (nice and crisp rectangles are pretty finicky to forge). Additionally, there is something to be said for the coins not having sharp corners.

Individually (or even put together), none of these factors disqualify rectangular coins from existing - indeed, we have examples both from the Orient and from Europe (namely Transylavnia) - but at the end of the day, round coins are just so much more convenient.

Adding to the already good answers, I'd like to toss in a little bit of physics.

As mentioned, coins during the Medieval period were generally hammered/stamped (casting wasn't common because it's harder to do accurately with dense materials such as metal). When hammering something, force is distributed radially out from the center of impact, which lends itself naturally to a round shape. Think of a wad of dough being smashed under a board: The dough will ultimately come out with rounded edges, even if it starts out roughly square to begin with. Corners are simply harder to manufacture through this process, they're much easier when cutting, as in paper money, which didn't exist in Europe at the time.

Note that paper money did exist in parts of Asia as early as ~700CE, and in those cases it was square, probably because cutting straight lines is easier than cutting curved ones.

I think the way money was done is the answer. I really can't translate all the specific words in English, but check Wikipedia. A smooth rectangular coin is more difficult to make.

Medieval money was not very regular with round hammers smashing a piece of metal (I hope that's the good word) but the strength applied on metal by a rectangular hammer would have been irregular and the coins would not have had straight sides. They would have look like a melted pat of butter, unless a big work of carving the sides is done after hammering coins.

The weight of a coin was the best way to prove it was not false, so carving the edges to make them smooth and straight would have lightened the final coin.

Aside from all of the good answer given here but can you imagine trying to pull rectangles out of a pouch or pocket? The corners would catch on everything.

Also, what is the coin worth if the corner broke off?

I have a different opinion, mostly based on school lessons. I'm not sure if it's totally wrong or right, it's just another point of view.

At the beginning, commodity money was rectangular. Larger denominations of money like grivna could be in the form of a stick. 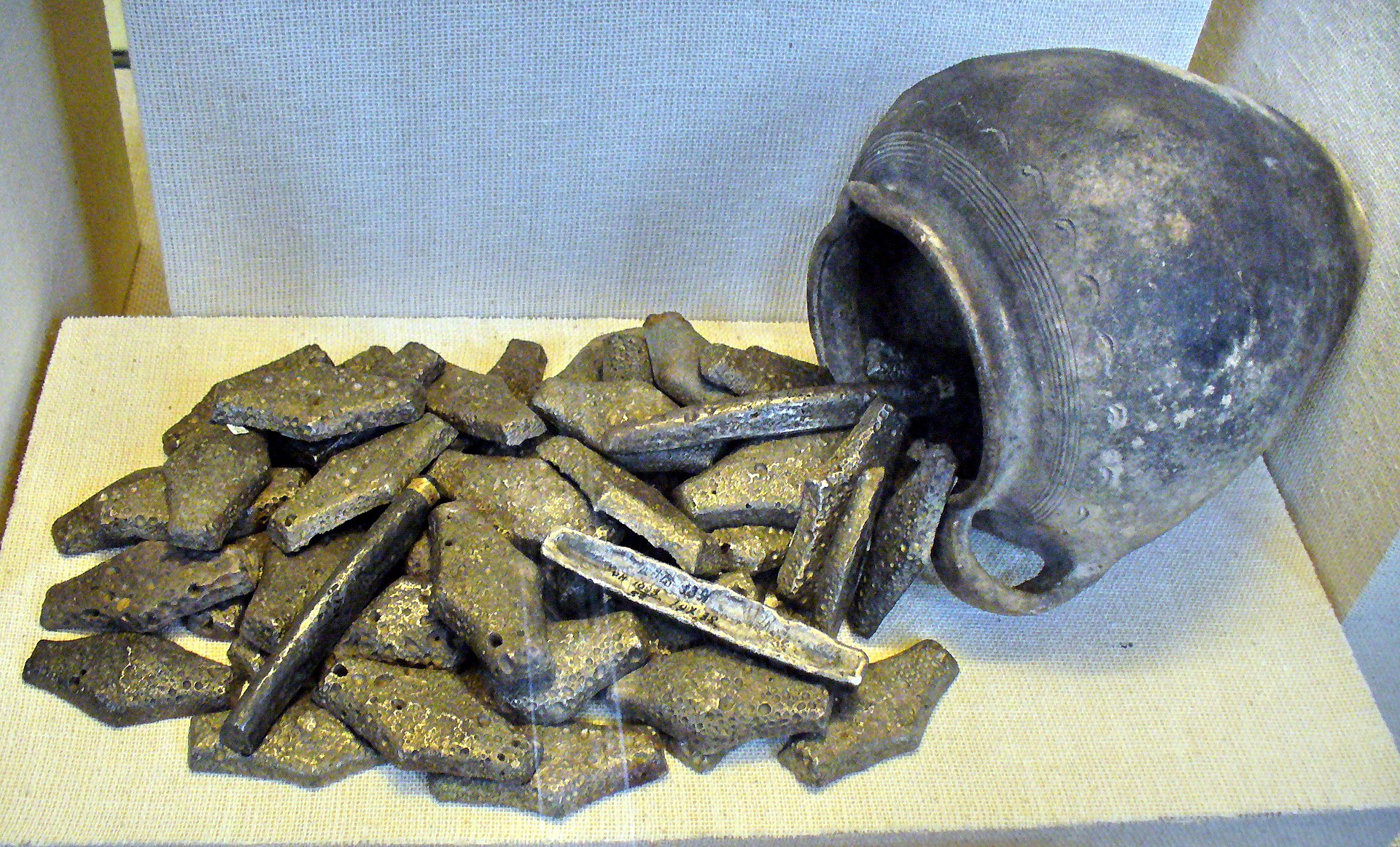 Early coins were made from precious metals and their value was based on their weight, so their form or shape was not as important.

Since weight was important for determining the value of the currency, one issue was coin debasement. It's easy to cut a piece from a rectangular coin so that nobody would notice.

Not the answer you're looking for? Browse other questions tagged culture currency or ask your own question.

12
Can postapocalypse world ditch one currency?
7
Creating a Classical civilization
55
Could a society use bullets as money?
15
Honey as a form of currency?
0
Benefits and Pitfalls of Electricity Money
5
What dictates a popularity of an art style in a certain period
28
Justification of physical currency in an interstellar civilization?
4
Can secrets/information be a feasible currency in a fantasy setting?