What is the climate on a brown dwarf planet with split heat sources?

Here is another planet question for you planet enthusiasts. I have this planet... 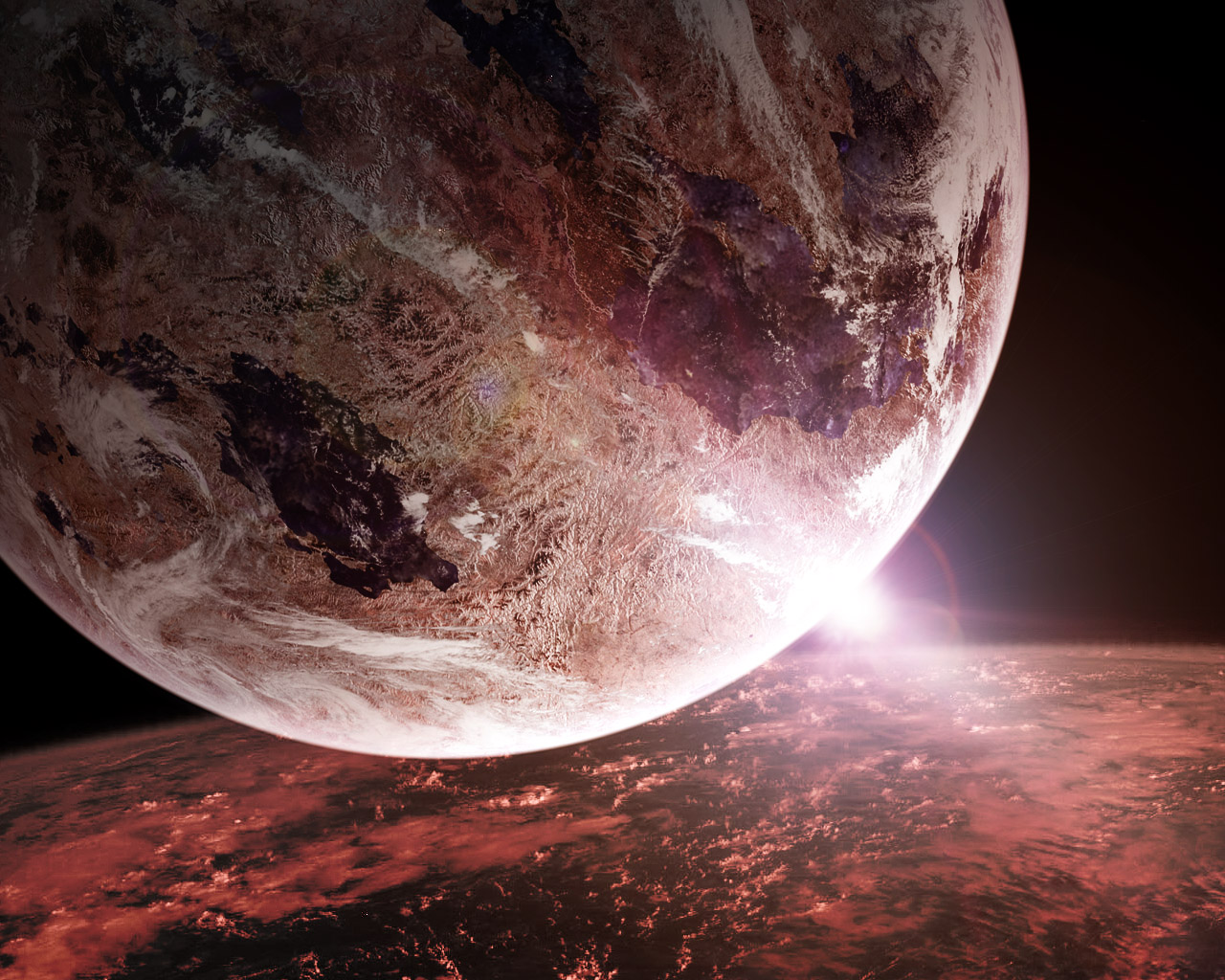 It's called Barahecio. The Mars-sized sphere's average temperatures hover near the freezing point of water. Of note also are the many seas that never freeze.

What would this world look like since it has split heat sources?

Specifically, I'm looking for the effects on climate and geography.

Describe the temperature differences from the side locked to the brown dwarf to the opposite side.

What are the most likely weather configurations?

Where would the most habitable place on this moon be?

Additional Notes before you answer:

I have provided you with a "standard model" to go off of for the system. The brown dwarf and its moon system are tilted at 45 degrees compared to its orbit, and the heat ratio that Barahecio receives from the star vs. the brown dwarf is 1:1. So 50% from each source. The earth-like atmosphere, and seas that resemble the great lakes in size. However, I welcome any more interesting configurations. If you do wish to change up the system a bit please mention the changes you have made.

My answer takes its detail from this paper regarding habitable moons. This is my first attempt at answering one of these questions so be nice!

The following aspects affect the climate of the moon:

According to the linked paper, the system's inclination of 45 degrees will ensure pretty even reception of heat across the moon's surface (see Figure 7, bottom right panel), averaged over one orbit of the dwarf/moon pair round the main star. And note that the details in the paper have the ratio to flux from the star and planet/dwarf at much more than 1:1, so in your case, the flux smoothing effect is more even than in the paper.

However, in the same panel, you will note a 'northern summer' and 'southern summer' is depicted which to my understanding results from the inclination of the orbit of the pair round the main star. Again, yours should be less pronounced all else equal thanks to that 1:1 ratio.

Despite smooth average heat flux, there will, of course, be interesting weather patterns depending on your atmospheric and oceanic and geological parameters due to the interplay of all the factors. Although the moon is locked, it will not have a "cold" side because of the contribution from both the star and the dwarf. However, the flux from the dwarf is presumably mostly infra-red which may be beyond usefulness for photosynthesis. So when the dwarf eclipses the main star, the moon will be dark but likely not much colder than the other side.

I feel that all these factors are going to create a weather system which is not the classic 'eyeball world' scenario for a tidally locked planet directly orbiting an M-Dwarf close in, and might actually be quite chaotic.

Also, see the paper for important constraints regarding how close the moon can orbit the planet before it suffers runaway greenhouse effect due to a combination of tidal heating and illumination. You'll have to work out how to modify these parameters based on how you judge the effect of brown dwarf radiative heating versus the radiative heating described in the paper.

In terms of ecospheres, you could think of the planet as a beach ball with a series of concentric rings radiating away from the hot pole to the cold pole, and the ecology is determined by the varying amounts of energy and moisture being received in each "ring". The distant sun will provide a small amount of energy and illumination, although if it is as far as you say, this could be minimal (maybe even as little as a full moon on Earth). Because the planet would be orbiting the Brown Dwarf fairly closely, the illumination would also be rather sporadic, with the distant sun rising and setting quite quickly. Most native life would have to be adapted to "seeing" and harvesting energy in the infrared band, so plants would probably be black in colour and the eyes of native creatures would be very large to gather enough light, to begin with, and have the proper adaptations to receive and image infrared wavelengths, so the eyes would look different from ours.

Although you have not mentioned other moons of the Brown Dwarf, it is quite likely that they would exist due to the intense gravitational field. Multiple moons would probably settle into resonant orbits (moons in nonresonant orbits get "pumped up" with energy and change orbits, either being expelled, absorbed by the Brown Dwarf or settling in stable resonant orbits. This should provide an extra source of energy for the moon's various tectonic, hydrological and atmospheric cycles, as the core is "kneaded" by the interaction with the other moons and heated more than it otherwise might be. This internal heat is probably what is keeping the oceans liquid (much like the internal oceans on Europa and other Jovian moons).

The last thing which might affect the moon is the presence of a powerful magnetic field around the Brown Dwarf. Jupiter's magnetosphere provides a great deal of energy to the environment, and if the moon in your system is at the right distance, it might be interacting with the magnetosphere much like the Jovian moon Io, which is working like an armature in a dynamo and creates a multimillion amp "flux tube" between itself and Jupiter. Something like that would certainly cause a great deal of disruption to any planetary atmospheres, as well as make scientific discovery interesting (you might discover electricity early, but the roar of noise on radio frequencies will prevent the development of radio broadcast technology and radio astronomy, for example).

One thing that will (probably) make a big difference to life on that planet is the unfortunate tendency for brown dwarf stars (along with small red dwarf stars) to have strong sunspot activity and solar flares. I have read that the former can dim the light from the cool star for months (sunspots that cover a large proportion of the surface) and the solar flares are extremely violent, more so that the sun's solar flares, and from a much, much shorter distance. So life on the tidally-locked side of the planet that faces the brown dwarf might get regularly bathed in ultraviolet or even x-ray bursts. Life would either have to shield itself on that side or move to the other side of the planet, where things would be cooler but less nasty radiation-wise.

Being a red dwarf, it will have a relatively high percentage of its energy output in the infrared part of the spectrum.
The planet will be bathed in a dim ruddy light, with lots of infrared energy warming it up.
The star will likely be far less volatile than our sun, so don't expect short duration climate cycles like El Nino. Climate will be a lot more stable overall.
Exact conditions, of course, depend heavily on whether the planet is tidally locked, and how far from its primary it orbits.
But overall you can probably expect a climate that's far less variable over time (unless the planet's orbit is highly eccentric of course, or heavily tilted, which is the cause of most of the earth's seasonal changes) compared to earth.

On the lit side, an eternal ruddy dusky sky greets those who go outside.
On the dark side, except near the terminator, you're in eternal pitch darkness, the only warmth ever reaching there coming from thermal convection, driven by winds caused by the planet's rotation.
As the planet is tidally locked, there are no tides, no wind patterns driven by tidal activity.

8
What's the longest plausible orbital period for a habitable planet with a 3:2 spin-orbit resonance?
3
Habitable planet around a binary brown and white dwarf system
6
Life on a rogue planet
2
Brown Dwarf effects on a habitable exoplanet orbiting the same star
9
Brown Dwarf Star vs Gas Giant as parent for habitable moon
2
The major effects on the habitability of exomoons orbiting this Brown Dwarf
4
Logistics of habitable moons orbiting a brown dwarf
2
Is it possible for a planet to not spin around its axis?