My world is progressing. I still have a couple of days before my deadline to finish it. If I can make it in less that 7 days, the other gods will be impressed.

My world have continents with mountains and I know about the water and air movements. But even with all the work that I have done, it's still a lifeless rock. The weather can indicate us where the vegetation should be but it's just one part of the equation. For example, it does not explain why certain species of plants are found in one place but not elsewhere.

What is a good process to figure out the placement of the major biomes?

If you've covered the earlier bases, specifically geography and climate, biomes are actually quite easy. As a first-order approximation, the predominant natural (before human intervention) biome for a region is largely determined by just two factors: precipitation and temperature. Here's a rough breakdown: 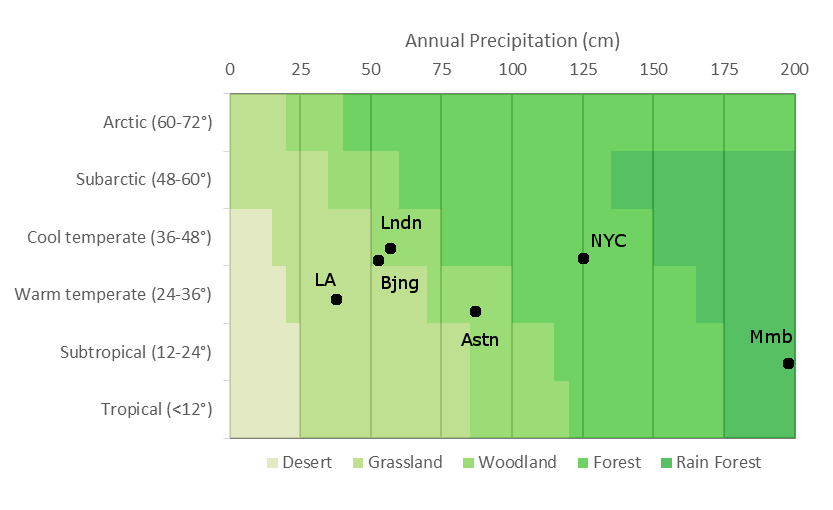 "Grassland" is really tundra in arctic and cooler subarctic areas.

I've marked a few cities: Los Angeles, Beijing, London (San Francisco is about the same), Austin, New York, and Mumbai. Note that although London and San Fran get relatively little rainfall, they have mild coastal climates with relatively little seasonal change, encouraging vegetation, while Beijing and New York have east-coast continental climates, with hotter summers and colder winters. The Gulf Stream also makes London (and all of Europe) much warmer than the same latitudes in elsewhere in the world. India's monsoon-dominated climate is a challenge for vegetation, so Mumbai is really a "monsoon forest," though its high rainfall (225 cm) would easily be enough for a tropical rain forest if the precipitation was even year-round.

Those are the two biggest factors. Next is topography, or really, drainage. A flat area will tend to collect water: if it's very dry, you'll get salt lakes, a little more and you get seasonal lakes, more and you'll get a marsh (a wetland dominated by grass), and finally if there's plenty of rain you'll get a swamp (a wetland dominated by trees). Going the other way, rugged topography mean hills. Up to a point, this typically won't have a profound impact on the biome: a rugged area with plenty of rain will be a forest just like the flatter areas nearby. Extreme slopes may prevent trees from taking root, but you might be surprised at what it takes!

On the topic of drainage, areas near rivers and lakes are basically equivalent to additional rainfall. Even a desert might have trees around the few arroyos and seasonal lakes.

Then there's elevation. All else being equal, higher land is cooler, has lower air pressure, and has greater climate variation. All of these factors tend to work against trees, and plant growth in general; a high plateau is effectively similar to moving one climate zone further from the equator. For example, South Africa is at about 30° S - the subtropical zone. However, the highlands have a climate similar to some temperate zones, which appealed to Dutch and British settlers in the 18th and 19th centuries. Note that highlands often catch rainfall from passing air currents, making them relatively green stretches in otherwise dry areas (e.g., the Atlas Mountains).

At a macro scale, that's about it. As you zoom in, there's more to consider:

These factors interrelate - forests reduce wind speed, decrease erosion, and may encourage rainfall (that's somewhat debatable). The good news from all this complexity is that it gives you room to fudge things: if you decide you really want a forest but the area seems too dry, it could be that the forest has very slowly been building its own soil and drawing in rainfall, and locals have been putting out fires and hunting the grazing beasts. Going the other way, you can make a desert in an otherwise bountiful area by declaring it to be a recently-exposed shield, with only a thin layer of soil on top of stone.

One last consideration: each of the biomes I listed above have many variations. A desert can be cold or warm, sandy or rocky, badlands or flats. Grassland could be steppe, pampas, prairie, or moor. Just looking at temperate forests, there's coniferous, deciduous, and evergreen, and many variations for each. Read up on what's out there, and customize your world so that each part is unique and interesting. Salt springs! Cloud forests! Mangrove swamps! Krummholz! Atolls! Use the guildelines here on Worldbuilding.SE to get a general idea of what's appropriate, then modify it to fit your story.

Not the answer you're looking for? Browse other questions tagged earth-like flora worldbuilding-process worldbuilding-resources .

99
A list of worldbuilding resources
57
Creating a realistic world map - Currents, Precipitation and Climate
6
Could I get some guidance on this map in progress?
2
How to develop ecosystem in science based way?