How to save humanity's legacy? [duplicate]

The Human species is diagnosed with some incurable disease, which has spread to every person. The luckiest have a year left to live.

Humanity is over, but our achievements need not be.

What can we pass on to the next intelligence that comes around? It might be another animal, or some extra-terrestrials. It might be in ten thousand years, or in a hundred million.

In a few months to a year, what can we save and how long can we make it last?

Notes:
- I'm not interested in whatever chaos might occurs during humanity's last convulsions; let's assume someone is left in peace to do whatever you propose.
- I am interested in longevity: please include a time frame, e.g. printing on paper would last <10^2 years.

If you etch the information onto plates, it should last until some external event such as a volcano or meteor happens to hit it, and that’s why you bury it under a protective layer and have more than one time capsule. You probably want to launch capsules onto other planets and even out of the solar system, where they might with luck survive more than the five billion years that the sun will, although any that we sent into deep space, we'd just be guessing where to aim. We’ve had the capacity to do that kind of thing for almost fifty years.

As for the genome, it would definitely be possible to record the letters of a human’s genetic code, although we’d need thousands of complete sequences to allow anyone to in theory create a viable breeding population, and of course there isn’t a single human genome, but one in the nucleus and then the organelles.

Communicating that information in a way that would allow an alien species to actually create more of us is an interesting puzzle, though. Imagine receiving a specification for a self-replicating industrial robot in the form of the program you would have one of those robots run to build a new robot. In order to build an authentic robot following those instructions, you would first need to create a robot that could follow the same instructions as the original robots in exactly the same code! So we might have to try to cryogenically preserve some human zygotes and hope that alien scanners can figure out how those worked. Unfortunately, we couldn’t tell the aliens how to make an artificial womb capable of growing human clones, because we don’t even know how to do that ourselves. We might be able to describe the requirements the clones would need for nine months, and hope they can figure it out. (Would we need to include samples of blood cells and tell them they need to provide lots of those, but alive? Or could they get by on some kind of artificial blood substitute? Not by 2016.)

But even those wouldn’t mean much to an alien with a different biology, though: we might get across, using chemical diagrams, which four amino acids correspond to the letters, but then aliens whose genetic code is different would be wondering why we’re preserving long meaningless strings of amino acids that don’t represent any functional protein. So we might be able to indicate that each three-letter block codes for an amino acid in a protein. But you can’t just list the proteins that make up a human, mix them up, dump them out, and get a human.

So there might not be any way to get across, “Hey, here’s how you can make more of us if you want to,” short of cryogenically freezing some human bodies (a pregnant woman?) and hoping they survive intact enough to reverse-engineer.

What we might be able to manage is to save some spores, freeze them, and shoot them into deep space so that, if they ever thaw out on an exoplanet, some living thing from Earth might survive. But would we want to? Even if we could get aliens to create a human baby someday, with no idea how to raise it or what to do with it, would that even be something we’d want? Just trying to preserve as much of our culture as possible seems like a much better idea.

BrettFromLA suggests using DNA to store information, citing "a half-life of 521 years". I found an article on the subject on Nature.com. Excerpt:

The DNA would cease to be readable [...] perhaps after roughly 1.5 million years, when the remaining strands would be too short to give meaningful information.

Edit: An answer on this related question mentions "genetic coding of messages into cats", which can be applied to this answer as well:
Coding as much information as possible in the DNA of our historically "resilient" species would allow it to be carried on even longer.

Sending out all our information into space via radio waves probably has the highest potential of ever reaching an intelligence, and it wouldn't take very long to build and launch a bunch of satellites that would carry all our knowledge and broadcast it to every directions, on a loop, for a few decades, maybe even a few centuries.

Placing a repository on the Moon will keep it safe longer. It is estimated that the landing stages of the Apollo landers will be recognizable for up to 250 million years (and that is with exposure to the constant radiation, erosion by micrometeorites and huge temperature swings). For further protection, the information in the repository should be placed in a cave or prepared chamber below the surface, where it will be safe for even longer.

The biggest problem after storage would be how to make the information readable to any species or beings who recover it. There would have to be some sort of encyclopedia like book with a primer that provides a means for translating everything else. The Pioneer spacecraft had a sort of prototype of the primer etched into a gold plaque on the side of the spacecraft: 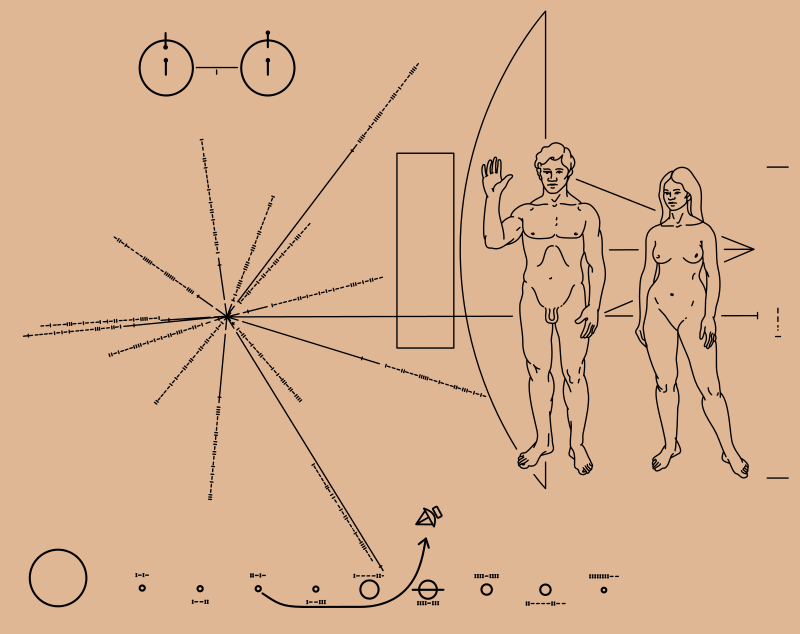 This is going to be a very intensive project, since in order to preserve knowledge will require etching millions of plates (gold or tungsten or some similar non reactive metal), creating spacecraft capable of going to the Moon (and ideally to several other moons in the outer solar system) and planting the libraries. I would suggest that non electronic or mechanical means be used since the mechanism for reading electronic records might not survive or not be intuitive for anyone else. (Computer records from the 1960's are often unreadable even today).

Maybe a year is not going to be enough time (and even with a hundred years lead time there will be lots of information that will be recorded), and there will certainly be a lot of controversy of what exactly should be archived, but with enough effort there should be a fairly representative sample of what our legacy was.

19
How can I save a high-tech/no-spaceflight civilization against the wrath of non-technological gods?
57
How do I defend an island nation from attackers with 15th century technology?
6
Defeating the Snakebot of Doom
15
Defeating the revised Snakebot of Doom
1
Reducing human military capability
1
Post apocalyptic science based story
3
Space station design for long-term safety and durability
5
Bootstrapping first metals and electricity without help of "easy" fire