I am imagining a race of beings called Loshp, who evolved on a planet orbiting an F-type star. These stars live for only 4 billion years tops before evolving into a red giant, and half that time was spent forming the planet. So, any sapient species has only 2 billion years to evolve from single-celled life forms before the star goes kapow and it’s time to start packing the sleeper ships.

The Loshp are hermaphroditic crustaceans who, while fully terrestrial, prefer wet coastal conditions. They attained sapience just as animals on their planet were beginning to colonise the land. Taking into account this, and their hermaphroditism, which hastened their evolution, could such a species evolve in the timespan described above?

Making extrapolations based on a single data point is a pointless exercise (pun intended).

We know only life on Earth and we pride ourselves to be the only intelligent life. Based on the current theories, it took life 4 billion years to get where it is now. 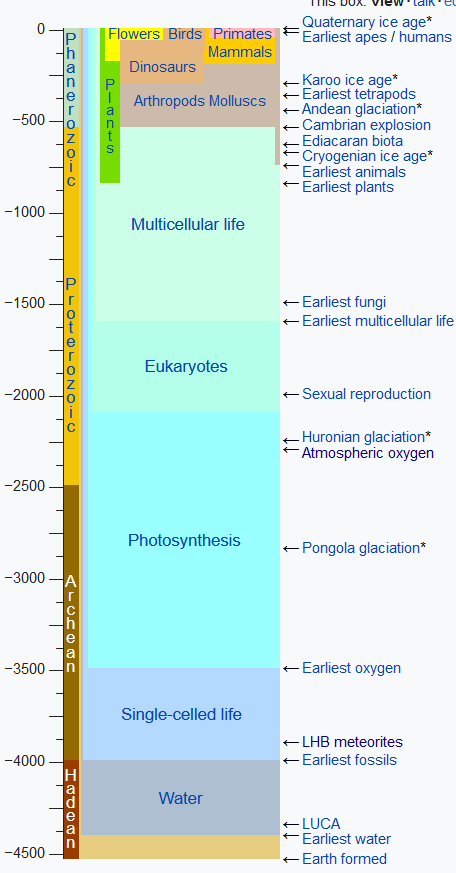 About half of those 4 billion years were spent before evolution found a way to make multicellular creatures.

Therefore, if evolution has a very lucky strike and nails multicellular life very quickly, it's plausible that in 2 billion years you can get to something similar to homo sapiens.

I am imagining a race of beings called Loshp, who evolved on a planet orbiting an F-type star. These stars life for only 4 billion years tops before evolving into a red giant, and half that time was spent forming the planet. So, any sapient species has only 2 billion years to evolve from single-celled life forms before the star goes kapow and it’s time to start packing the sleeper ships.

What makes you think that it takes a planet two billion years to form?

The oldest material found in the Solar System is dated to 4.5682+0.0002 −0.0004 Ga (billion years) ago.[38] By 4.54±0.04 Ga the primordial Earth had formed.[39] The bodies in the Solar System formed and evolved with the Sun. In theory, a solar nebula partitions a volume out of a molecular cloud by gravitational collapse, which begins to spin and flatten into a circumstellar disk, and then the planets grow out of that disk with the Sun. A nebula contains gas, ice grains, and dust (including primordial nuclides). According to nebular theory, planetesimals formed by accretion, with the primordial Earth being estimated as likely taking anywhere from 70 to 100 million years to form.[40]

So your two billion years for your planet to form is about 20 times too long.

Thus the natives of your planet would have approximately 3,900,000,000 years to evolve to intelligence, 0.859 as long as as the 4,540,000,000 years it took on Earth. Considering how little is known about the average time it takes for intelligent life to appear after a planet forms, the slightly shorter time available for your aliens shouldn't be a big problem.

The simple answer is yes, of course.

Evolution is based on random chance mutations. It only took half billion years on Earth from the earliest known brains to humans, about 200,000 years ago.

Before the brains, maybe 3.5 billion years of life, but the steps are random.

And there are hints that life itself appeared on Earth within half a billion years.

So you are only trying to cut the timeline in half, a timeline entirely dependent on random timing of events, so that is certainly plausible.

It might the equivalent of rolling six sixes with standard dice, but the chances on that is 1 in 46,656 -- and scientists estimate there could be six billion earth-like planets in our galaxy (The Milky Way) alone.

Our evolution got a randomized jump start 65M years ago, when an asteroid wiped out the dominant life forms and opened up thousands of new niches (previously occupied and defended by larger dinosaurians) for the small rodent like creatures that were our ancestors.

But is was random. It could have happened a few hundred million years earlier.

The conditions for the evolution of brains existed for a billion years before they actually happened; but that was also random. The same for the mutations that allowed multi-cellular lifeforms.

And on and on. The time line for evolution is extremely compressible. Look how quickly our selective breeding has completely transformed wolves into dogs, or all sorts of animals (like chickens) from their wild form into something that could not possibly survive in the wild, but are packed with meat and fat for our consumption. Wheat and corn are not "natural" foods, neither are most fruits. We've compressed thousands of years of evolution into decades or a few centuries. No reason luck could not do the same.

Make your planet particularly volatile and often (meaning on the scale of hundreds of thousands of years instead of millions) brutal: volcanoes, earthquakes, asteroid strikes, solar flares, radioactive incidents -- that will accelerate evolution and select for adaptability.

F-type stars depending on mass have varying lifespans as main sequence stars. An F6.1V should last for 5.7 Gya.

The planet itself forms physically within 50-100 million years, but the process of the solar system and likely debris clearing would mean 200-300 years of asteroid bombardment which will mean life will not be feasible for a significant period. (Perhaps I am wrong, but did you mean half of the time being spent on setting up conditions for life in this way?)

If you want an Earth-like atmosphere you need a rocky inner core, so something within the frost line. A large moon stabilizes the system and that is likely needed for the proper tidal system in the ocean or even lakes to help generate suitable amino acids in a nuclear geyser. This takes time to set up, but it varies.

More importantly, plate tectonics needs to be functional to fix the otherwise toxic system that comes from natural formation and the bombardment. A large strike which causes the crust to fracture and set the system into motion allows for proper cleansing and the ability for life eventually colonize the whole of the planet.

I cannot see any of these things working within 2 billion years based on purely the process of forming a stable world for which life can actually spread across. Yes, life can exist in niche realms, but if the otherwise whole is too inhospitable then your life will be essentially constrained to volcanic vents and such.

After the primordial crust is subducted and falls into the core you have the proper shielding and the earliest real possibility of a 'mainland' you could use for a map arising. Assuming a lot of things are in line, yes, you could speed up the process of life greatly, but the critical thing your species is a type of crustacean - meaning you need to have suitable evolution to use calcium and phosphorous.

Contrary to Amadeus's assertion: " it would not be surprising if evolutionary good luck produced human-like intelligence within two billion years. It is entirely within the realm of realism." is needs to be couched in the fact that practically a billion years of set-up needs to be done to form the planet and get the processes underway for it to work. With stem and crown evolution events being the real driver of natural diversification and evolution through high radiation magma from rifts, the conditions could be possible to speed through a marine environment. Though much of the volatility described would either do almost nothing or possibly wipe out life. Frankly, 1 or 2 cataclysms would be expected.

With your underlying concerns about the planet formation times having been answered, I think it would be easily possible to have your species appear in 2.8-3.2 billion years. Just be mindful that if your planet sits in a precarious spot the natural solar system evolution could kill your planet before it gets the gas giant phase. (Increasing size, heat, luminosity) SO MANY variables here, so I wouldn't go upping to a F1V class to compensate for earlier development of life. (Around 3.6 gya lifespans.)

If you are intent on doing an end-of-times scenario you have plenty of time for life to develop and still be realistic. Hope this helps.

35
Evolution of species with separate sapient and non-sapient forms?
8
Red giant Habitable zone
3
How to evolve sapient bats
4
Could intelligent life evolve in caves?
4
Could plant life evolve on a world with a toroidal magnetic field?
6
Could Multicellular Life Evolve Sans Cryogenian?