How Could Bioluminescence work as a Flashlight?

So I have a Koosh-like organism which uses bioluminescence. I've recently realized that there aren't really any organisms on earth which can direct their bioluminescence into a flashlight-like beam (at least that I know of). They have eight tendrils, each one has a bioluminescent bulb at the end. My question is: how would they direct this light into a beam they can use to locate prey?

A few notes about evolution:

So your "Koosh-like" predators have good eyes. That means they have the structures to produce an optical focus.

That also means they have a built-in way to focus the light from bioluminescent symbionts: modified eyes. They have extra eyes which, instead of an image-detecting retina, have a relatively large sac with a high density of bioluminescent cells, and in front of that the rest of the structure of an eye, including the variable focal length crystalline lens (either movable, like in a fish eye, or variable shape like a mammalian eye, makes little difference in this case).

This structure, like an HID headlight, will cast a beam that the predator can focus to a narrow(ish) beam or cast wide and diffuse, by the same muscular control used to focus its sighted eyes. There may also be vestigial retinal cells that serve to provide brightness feedback, so the creature can make the light dim (for stealth or use in a very dark environment) or bright (for detail, or to supplement stronger ambient light).

Yes, and we have examples. 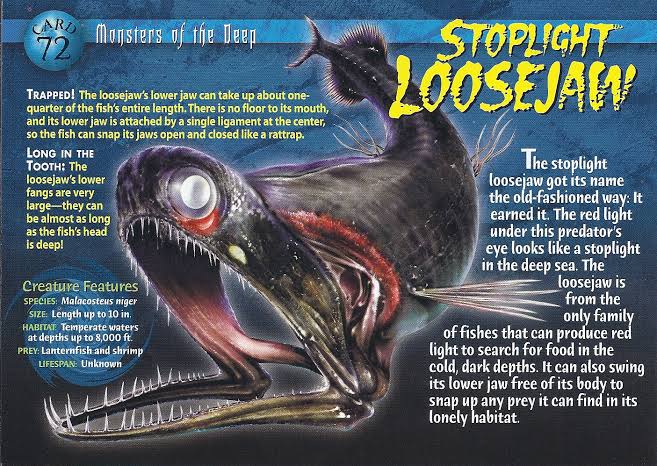 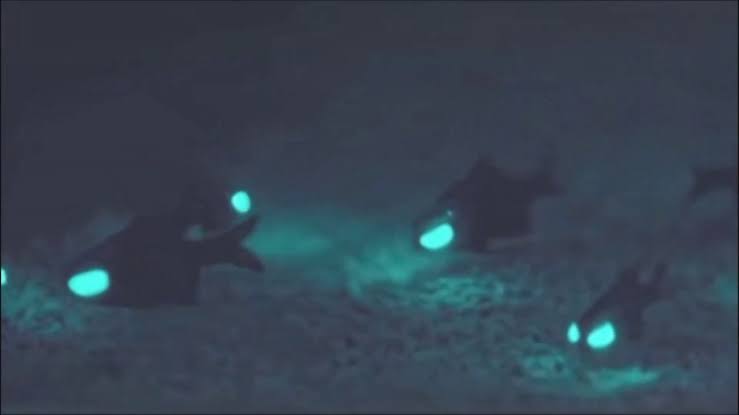 Yet again we have a Case of "nature did it first" here. As far as we're aware, both the stoplight loosejaws and flashlight fishes use special organs close to their eyes to produce light, which they use to hunt as well as for other purposes. In the case of fleshlight fish, which gather in schools, we have instances of schools producing enough light to lighten up the coral below them.

As far as real world examples go, your bioluminescent creatures aren't going to be sending out beacons of light, and how far it will travel will also depend on the color of the light produced, and based on what's known about animals that produce light and use it to hunt through sight, your creature might be better off keeping its tentacles separated. Let me explain:

Flashlights are usually good for when you're in a dark place and needs to see what's around you, that's the pro of having a flashlight on, the problem is that everything else that can also see and is in the darkness can find you from as far as your light reaches, because you're basically carrying around a beacon that's signaling your location. The stoplight loosejaw prevents this by producing red light, which despite not traveling as far, is a type of light most fish cannot see, allowing it to hunt with light while remaining hidden from its prey and predators alike.

Based on this, your creature could have 2 main strategies:

1- keep the tentacles together and having organs that produces light in wavelengths only it can perceive, allowing it to remain hidden.

2- have flashlight fish level organs on each tentacle and keep them separated and moving around. If the tentacles are long and focused enough, this serves as a double purpose here, both allowing the creature to see as well as potentially mimicking a small school of smaller bioluminescent creatures, acting simultaneously as flashlights and lures for any would-be predator thinking it found a meal.

As for focusing the light, flashlight fish already have various methods of "turning off" their organs, usually making use of special black membranes that cover them up and prevent the light from shining. Your creature could easily have similar structures, allowing it to better control the direction of the light better as well as produce more complex signals, which could allow it to communicate with others of its kind much like flashlight fish.

2
Can my Deep-Sea Creature use its Bioluminescense as a Flashlight to Find Prey?
10
Ultraviolet bioluminescence

15
Evolution of a tree-based predator that threatens to kill/eat prey unless prey feeds it?
3
Is this kind of lifeforms and ecosystem on Enceladus plausible?
3
"Realistic" Dwarfs Part One: Bioluminescence for active Vision
1
Which developmental pathway makes more sense?
6
Animals with biological radar
3
Is my Bioluminescent, Four-legged, Bat Creature Possible?
5
Are my "ZW humans" plausible?
2
Can my Deep-Sea Creature use its Bioluminescense as a Flashlight to Find Prey?