Can my Deep-Sea Creature use its Bioluminescense as a Flashlight to Find Prey?

My intelligent alien species looks like a Koosh Ball: 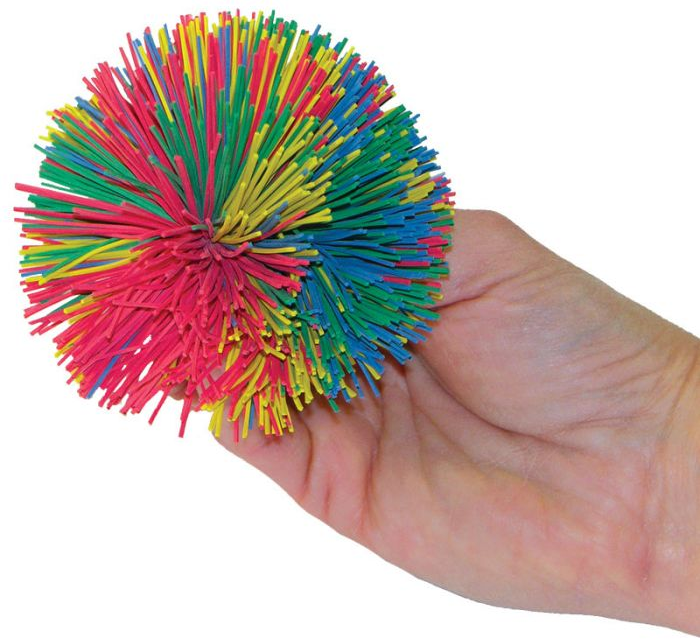 They use biological "Flashlights" based on bioluminescence which uses sulfur as an oxidizing agent instead of oxygen.

This species lives on a hypothetical moon of Epsilon Eridani b which has a subsurface ocean. They live 50km deep in this ocean, where the pressure is about 0.5 GPa. This happens to also be at the seafloor of such an ocean.

They have 4 different types of tendrils. About half of them are "feelers" which are mainly used for four senses: "hearing" which is really just feeling vibrations, a sense of smell caused by the olfactory sensors which cover the tendrils, magnetoreception caused by a small amount of magnetized iron in some of the feelers which pulls them ever so slightly to the north, and finally a sense of touch which is quite literally just nerves running down the length of all of the tendrils.

Two types of tendrils are dedicated to catching prey: the "sticky" tendrils, which have a slight static charge, pulling in small particles such as bits of algae, and the "twisty" tendrils which are designed to trap larger prey by wrapping around them, and preventing them from intaking vital resources.

The final type of tendril is the "flashlight" tendrils, which have fiber-optic properties and a bioluminescent bulb at their base, which illuminates whatever the tendril is pointed at.

The species also have rudimentary light sensors on the "flashlight" tendrils. At the base of the tendril where the bioluminescent bulb is, there is also a rudimentary eyeball which uses similar mechanisms to that of Earth eyeballs, but with a much lower resolution than a human's, and that don't have any cone cells for detecting color. They only have rod cells which detect brightness.

This is mostly based on real-life evolution and science, along with answers to a few other questions on SE, with only a few deviations that I think are quite plausible.

What do you think? Is my idea plausible given real world science and biology? Don't hesitate to point out flaws just because it's well-developed. I want honest answers.

Your creature is described as a predator but does not have a predatorial body. It looks soft and fluffy and unspecialised.

Your Koosh has only rudimentary eyeballs. This is bad. Your Koosh needs super eyeballs to see its prey in such limited light. It needs eyes miles better than everything else on the seafloor. Otherwise the prey will see the Koosh long before the Koosh sees the prey and then the prey escapes.

If you ever cycle your bike at night you will know what I mean. A strong headlight gives visibility to a dozen metres. But you can see other riders approaching from hundreds of metres away. The advantage is to the prey.

This is the hardest part to believe. That the Koosh can see so well compared to everything else that the prey will not see the Koosh coming.

Powerful eyeballs cost a lot of energy. So specialized predators tend to have only one set of eyes. Not eyes all over their body like your Koosh. If the predator needs to see some direction they just turn their body to point that way. This is easy because they have powerful. . .

or at least some way to move around. This is good for chasing down the prey. You need to find the prey and catch it too. Your Koosh falls down here as well. The thing is far from aerodynamic. It is not clear how the thing moves at all.

I will not comment on using sulfur as an oxidizing agent. Putting complex organisms at the bottom of the seafloor under miles of ice is already a stretch in my eyes. I say if you want bioluminiscent aliens under the ice then put them there. Don't worry about the chemical biology.

How do we fix it?

To make the Koosh ball a predator, stick an eyeball to the front and a tail on the back. To not alter the Koosh design too much, make it radially symmetric. The tail could be one or many flagellums (note: check can large creatures use flagellums) or a skirt. The skirt can be in one part or many parts. We only need flashlight tentacles on the top of course. 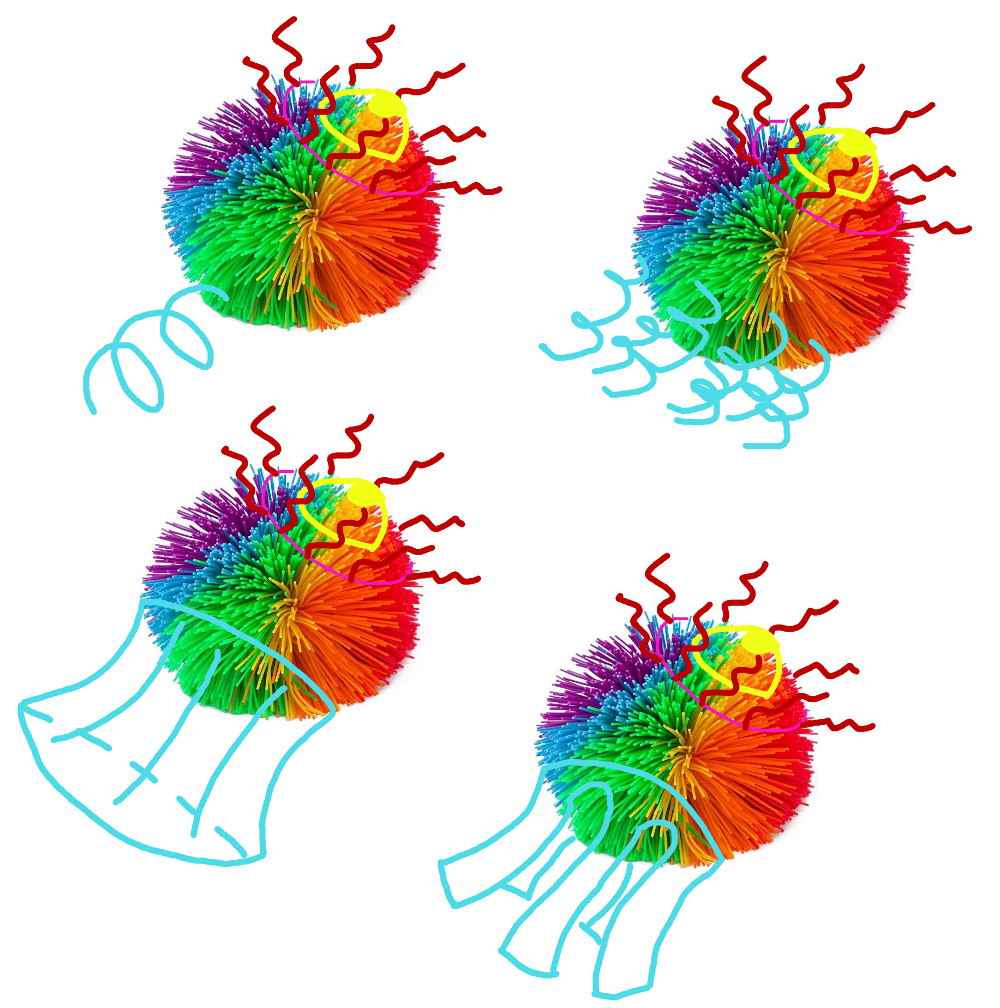 Keep the normal Koosh balls in your world. They are grazers. They eat plankton or moss or something that doesn't move. Maybe the predatory Koosh eats them.

Instead of a tail you could also go with a siphon, like an octopus or pyrosome. The Koosh sucks in air and spits it out behind to propel itself. In that case there is a ring of smaller eyes around the siphon and a frilly thing at the back for steering. 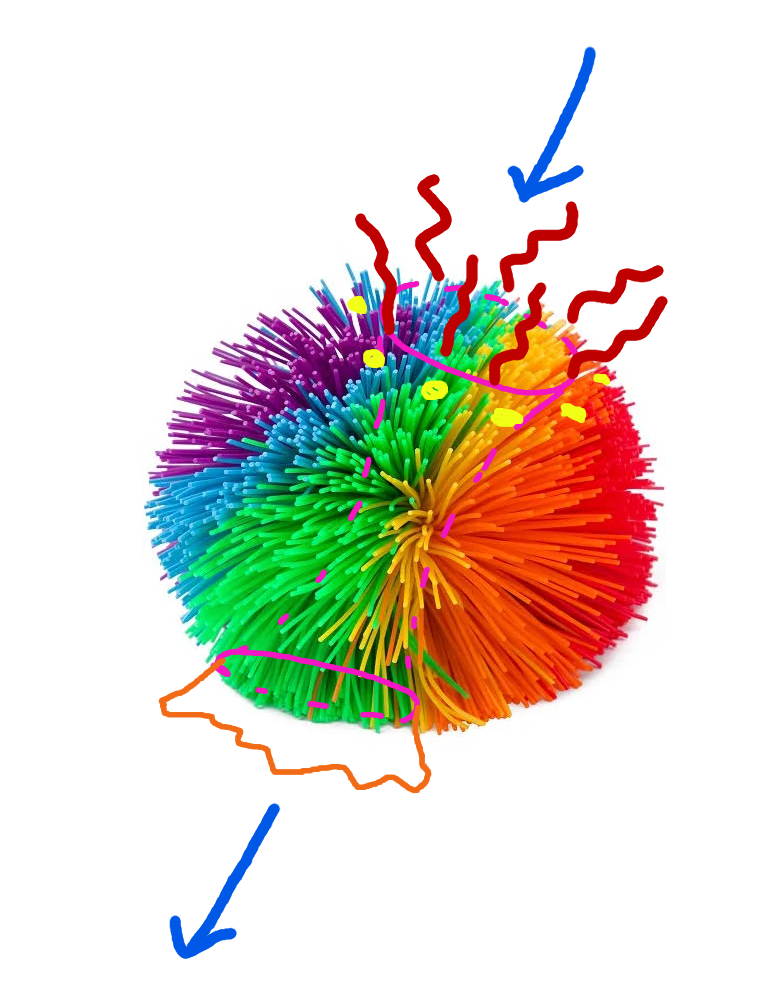 There is a real life fish that projects red light in order to detect prey in the dark Red light is the first wavelength to disappear in water, so most fish, and especially deep sea fish cannot see it. But the dragon fish can in fact see red light and projects it with bioluminescence so it can see prey without being detected.

This is an anglerfish an actual thing in the oceans of Earth that does what you describe. 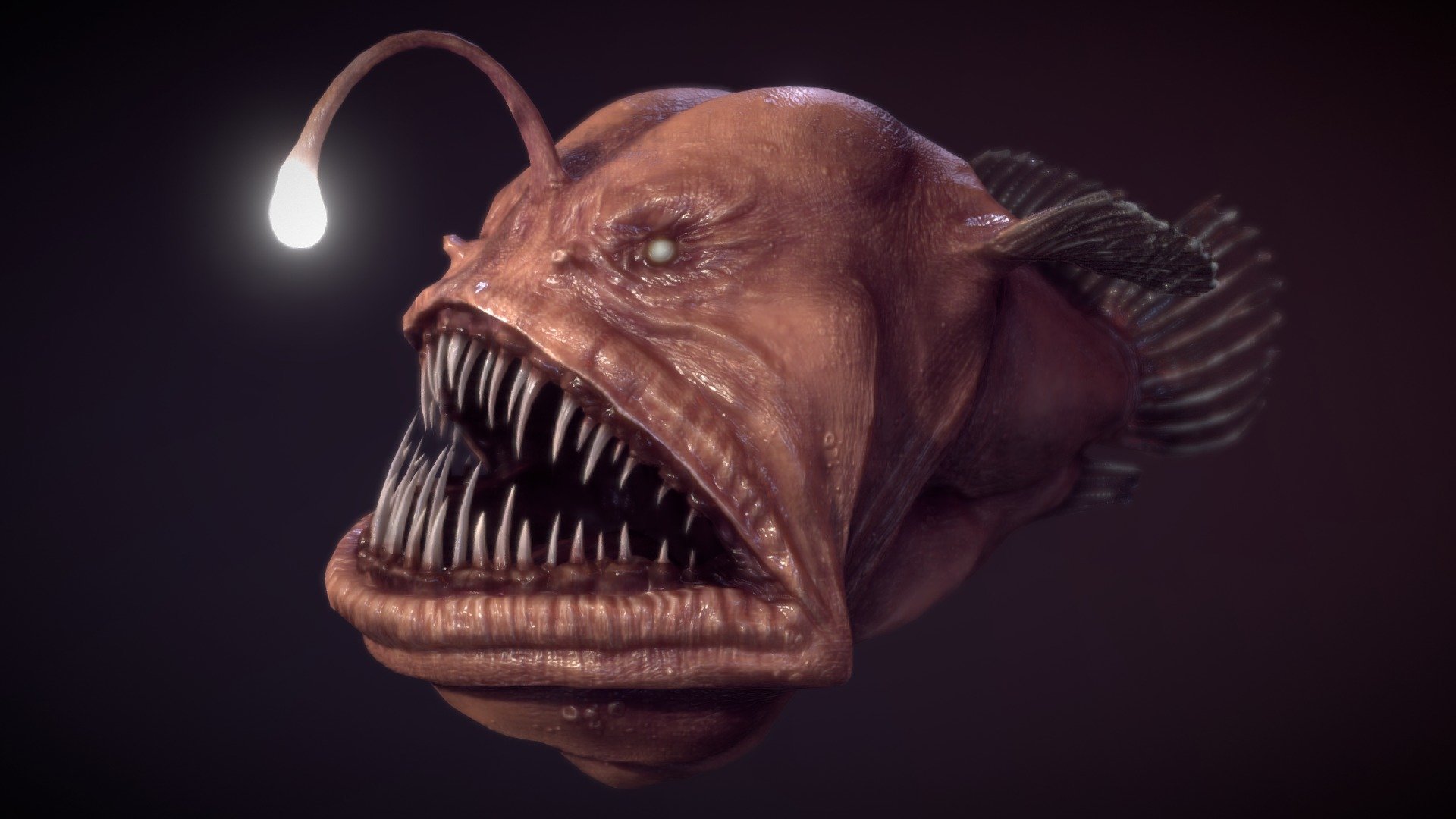 6
How Could Bioluminescence work as a Flashlight?
-2
Sentient Koosh-balls: How would they think?

12
How can a nine tailed fox catch its prey?
4
Radiotrophic Deep Sea Life?
11
How can a warm-blooded creature with external gills avoid heat loss in the sea?
11
How can my creature keep sand out of its mouth?
7
Could a creature use lightning/electricity as its energy supply?
9
What Would a Deep-Sea Diving Humanoid Look Like
4
how could a creature have a vacuum chamber inside its body
9
What radio wave frequencies work best for communication between deep sea creatures?
1
Could a creature use its tail to move on land?