Does adrenaline have anything to do with explosions?

I've started a fantasy story in which the main character and some others can have access to extremely high adrenaline generation and manipulation. They would have the expected associated powers of overall faster movement and reflexes and improved observation and thinking. I've gone a step further by supposing this would give an important healing factor. The main drawback would be that entering this state of high adrenaline would make the user extremely hungry and thirsty as essentially their metabolism would skyrocket and ressources would get depleted.

You see, adrenalin's main purpose as a hormone, putting it simply, is to alert the body its time to enter "survival mode". Essentially, it's telling your body that this is a dangerous situation where your life might be at a risk, and so it triggers several processes in your body to ensure you can overcome the apparent threat. To note a few:

Sounds awesome right? During a full on adrenaline rush, wounds don't hurt as much, you're usually more concentrated on what's causing the problem and you're tapping into more of your strength than you normally would. It's almost like a superhero mode. Why then isn't it on all the time? Well... You see, fight or flight mode isn't good for you. Actually it's kinda terrible and the only reason it exists is that it can give you a temporary edge at keeping yourself alive. Let's go back at the main "superpowers" the adrenaline rush usually gives you.

Summing up: an adrenaline rush may sound like a cool thing where you're undoing the limits of your body, but at the end of the day, it's an extremely stressful process where your body leaves itself more vulnerable to injuries, immunosuppressed and cranked up on sugar so that you can live to regret having had to do it another day.

You're absolutely spot on that they'd get hungry, thirsty and have their energy reserves deplete faster. You can also add to that however a high probability of them getting sore muscles, overall tiredness, and also that their healing will not improve during the surge. If anything they'll most likely heal slower (it's time to run from or kill what's trying to kill you remember? If you waste resources trying to patch your wounds now, you'll probably not live long enough for them to fully heal). From a more realistic perspective, your adrenaline manipulation might be mostly useful to let you enter an adrenaline rush at will.

As for explosives related to adrenaline, that's also a hard pass. The adrenaline may leave you in an "explosive" state, but that's about it. There's basically no real world animal abilities related to controlling fire other than putting it on a weapon by covering it in flammable material (also, from your own body's perspective: "why would you do that? I'm weak to that too you know?").

but what would be the right track?

So, now we've gone through the "UM, AACHTUALLY" part, what do we need to get proper adrenaline powers and fire manipulation without straying too far from reality? Let's get into this:

To fully get the best experience possible when intentionally flooding yourself up with adrenaline, you'll probably need them to Have the following:

Summing up: can adrenaline manipulation give you fire powers? No, it really can't, and from a realistic perspective, all it does is allow you to enter a physiological state meant only for emergencies whenever you want. HOWEVER, if we stray a little bit from reality (or a lot when it comes to one of the heat-related powers), you could potentially have someone who can benefit from an adrenaline rush better than others, and who might still be able to burn people, and that holds somewhat true even if we don't give your character the power to dive into an active volcano and be totally fine.

I'm not aware of adrenalin being explosive (it's not gasoline for humans) but there are downsides to too much.

There is a phenomena called "Hysterical Strength" that is documented in that it exists, but isn't understood how it works (more on why in a moment).

In effect, the human body is a lot stronger than it seems to be. If you were able to use the full strength capacity of your body at will, your body would essentially rip itself apart... which is why you only use a fraction of your physical strength most of the time. However, in times of extreme duress, this restraint is overridden, which results in stories about people who were able to lift weights far higher than what would be expected a person of that size capable of lifting. You've likely heard stories of mothers singlehandedly lifting cars off a pinned child. This is in effect hysterical strength. You are in such a state that your body will momentarily override the limits to your strength in order to deal with a life threatening situation.

Given that it's only been observed by people dealing with actual danger to themselves or others, its not something that is easy to test for in any lab that wants to win the coveted "meets the bare minimum of ethical human testing standards" award. Threatening the lives of test subjects to such a degree as to trigger this state tends to be disqualifying. What little is known about it is that, as it occurs in situations that trigger the "Fight or Flight" response, it's thought to have something to do with adrenaline.

And remember, like most machines with regulators to stop it from operating at a dangerously high power, opperating above "the red line" is always possible, it's just not practical at least not for long term use. The redline is there to tell people "You should stop increasing power now if you don't want a costly repair." But in certain situations, the costly repair far outweighs not having the edge.

In effect, for humans, it's not the Earth Shattering Kaboom that you likely wanted, but I tend to take a Mythbusters' approach to this: You don't have to meet the technical definition of an explosion to destroy something in a way that looks explosive.

Instead of adrenaline, ethanol.

Working backwards, ethanol is flammable for sure. You can easily spit an alcoholic drink across a lighter and make a sweet flame cloud. Note: this must be a drink with a high percentage ethanol. You can do it with beer but you won't get the flame cloud.

Now the other things you want

/They would have the expected associated powers of overall faster movement and reflexes and improved observation and thinking./

Re healing powers, probably not. But hunger and thirst probably - thirst because alcohol is a diuretic and hunger because that falafel place stays open after the bars close and they have that salty sauce there.

Yes, ethanol. Maybe cut with a little ether! That will make you some fine fireballs. Your character can wear a bandolier of flasks. Like Chewbacca, but flasks of ether and ethanol. 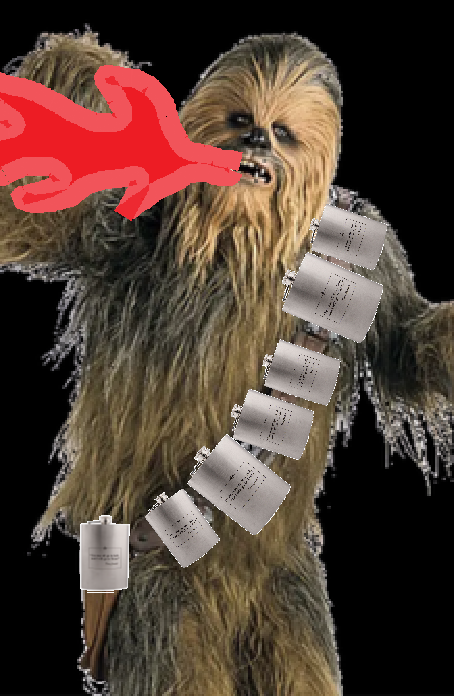 This is just concept art.

11
Fire Resistant Armour for a Medieval Era Like Setting
9
What are some not-so-obvious effects a person might experience if they were still conscious and active, but didn't have a heartbeat? [RE: Vampires]
20
How could humanoids master forge fire without using vegetal materials?
8
Adrenaline-fueled cognition
6
What limitations can I put on wings for more tense/risky action scenes?
10
Is it possible to make blazing, flying spores/seeds?
7
How to avoid respiratory and circulatory problems in a firebreather or flaming creature?
8
Determining Feasible Mermaid Locomotion Methods (Land Edition)
2
Will the Violet-hot Flaming Torch Annihilate Everything Around Him?