What does a naval vessel's crew composition usually look like?

Planning and writing a sci.fi story with Space Navies(tm), and I realize that I'm tempted to wonder why you need more than three of four people punching buttons and pulling joysticks to move a ship and fire the weapons.

So, obviously there are more roles to fill, I realize (and of course you gotta consider shifts, crews obviously need to sleep but you can't just shut down your ship while everyone sleeps), but I have no notion of exactly how many people fill which roles - Engineering? Navigation? Weapons control? Guards? Making food?

Are there any lists or overviews over what various contemporary naval vessels' crews are composed of? That is, not just the number of crew but also an approximate distribution of how many fill what roles on a ship - or for that matter, what roles you actually need on ships. Even if it wouldn't be fully translatable to space navies I can extrapolate well enough I think.

This wikipedia page, though describing a battleship decommissioned nearly 30 years ago, has a pretty interesting breakdown of roles on the USS Missouri. I'm a little bit hesitant to use it authoritatively since it's only a user article, but it has an impressive breakdown that I think effectively maps out what kinds of roles you have on a massive vessel that needs to operate autonomously for long periods of time. The detailed breakdown is far too extensive to reproduce here (I highly recommend checking it out in the link), but here is the summary across the major divisions: 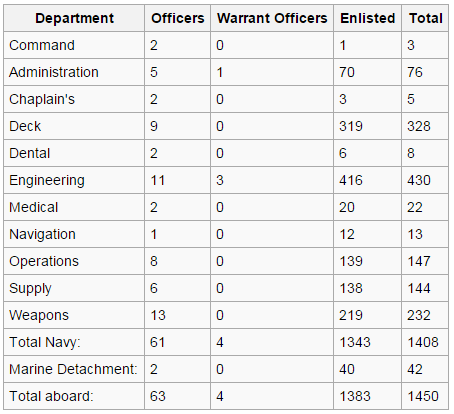 In most sci-fi settings involving space navies, AI often has a large influence. Looking at the three largest divisions of labor on this battleship (hull / deck maintenance, engineering, and weapons) there is a lot of room for automation and AI control. Weapons systems in space are ripe for automated control and targeting for best effectiveness (indeed, even modern naval battleships make heavy use of automated targeting). Hull maintenance will hopefully be managed by drones, especially given the complexity and risk of human EVAs. Engineering, however, is likely to continue to have a heavy human component. The complexity of propulsion and power generation is likely to eclipse modern-day ships, not to mention the new forms of life support. A few other divisions can expect to see AIs taking a role, particularly navigation and operations, but other divisions such as supply, medical, and administration will remain primarily human and their sizes scale based upon the total number of humans on board.

For starters you should decide whether or not you're going to have high levels of automation or everything going to be done by hand.

Depending on how advanced your setting is, I would generally recommend more automation. The following website will be very useful for your question: project Rho

Well not everything on that guys site is the greatest for those specifically trying to write fiction, he offers a great many guidelines for helping you keep yourself grounded in reality. I recommend giving it a look. It should answer a great many of your questions.