Should castle walls be circular or square?

In many medieval portrayals, the walls of castles are always portrayed as square. But would the castle be better off if the walls were circular instead of square?

Each has its advantages and disadvantages. Circular walls are more likely to deflect cannonballs with minimal damage, but the outermost point of a circular wall is hard to defend. Interlocking fields of fire are all but impossible in this situation.

Square walls are more prone to suffering damage from cannon fire, but it is easier to generate interlocking fields of fire to defend them.

In the early medieval period, cannons weren't a problem, because at first, they didn't exist, and then they existed, but were unreliable and lacked the power needed to knock holes in thick stone walls.

As cannons improved, so did walls. They became rounded or angled to deflect big projectiles while absorbing minimal damage.

In the late medieval period, the firepower produced by cannons was too much for any walls to withstand for any length of time, and the pattern became low profile walls with gently sloping earthen ramparts to absorb cannon fire.

So the best design for your castle depends on how big of a problem cannons represent. As cannons become more powerful and numerous, walls should first be rounded, then lowered and protected by hills of loose soil.

If cannons aren't an issue at all, or if your walls are low to mitigate the threat posed by cannon fire, your walls should be angled to allow your defenders to create interlocking, overlapping fields of fire. The more men you can get to fire over the same patch of ground, the safer you'll be. 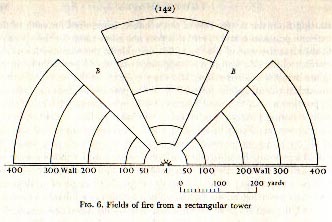 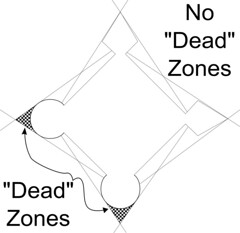 Worse yet, the rounded shape that had previously been dominant for the design of turrets created "dead space", or "dead" zones (see figure), which were relatively sheltered from defending fire, because direct fire from other parts of the walls could not be directed around the curved wall. To prevent this, what had previously been round or square turrets were extended into diamond-shaped points to give storming infantry no shelter. The ditches and walls channeled attacking troops into carefully constructed killing grounds where defensive cannon could wreak havoc on troops attempting to storm the walls, with emplacements set so that the attacking troops had no place to shelter from the defensive fire. Wikipedia 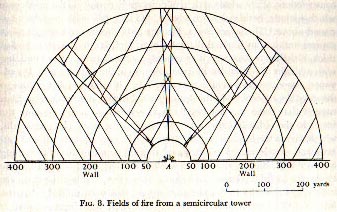 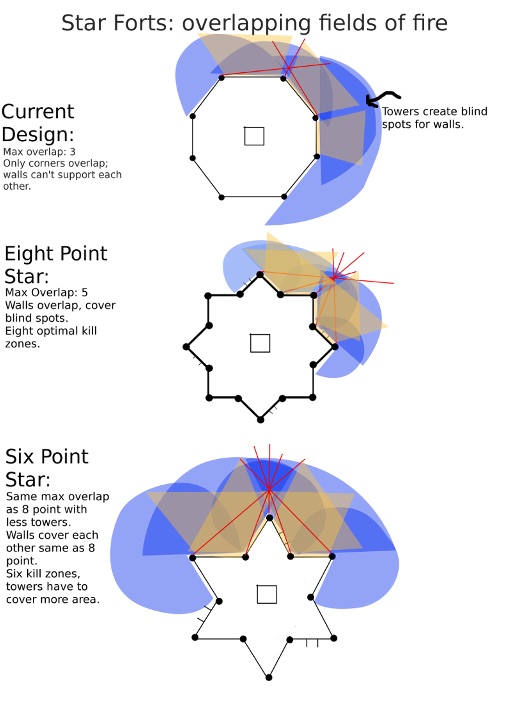 Source
The ideal solution: Overlapping fields of fire, only possible with a star fort.

On the long term, if you want your fortresses to withstand cannon fire, you're better with triangles. It's from the renaissance but nothing prevents it to be built earlier. The style of fortification is named Vauban after the french architect/engineer Sébastien Le Prestre de Vauban. 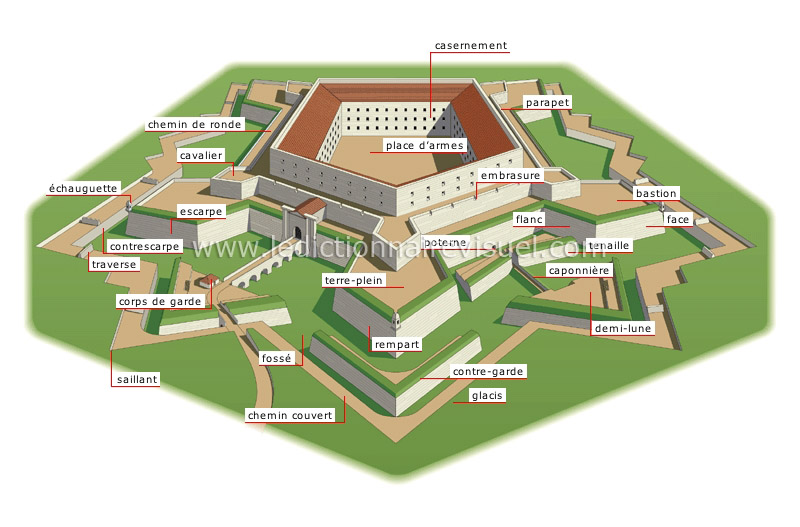 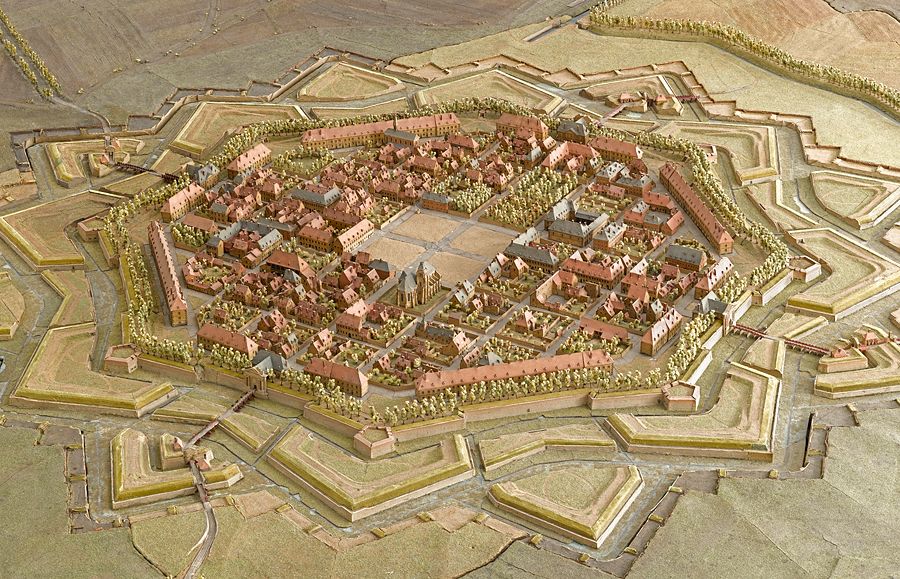 There are many reasons:

It's more difficult to sculpt semi-circular stones than straight stones. In order to have a perfectly round wall/tower, each stone needs to have the perfect shape, not a big square. That's a lot of work!

In a square room, furniture are easier to build. Along a straight wall, you can easily make a corridor. In medieval times, the castle was very often a place where a lot of people were living. Workers were building theirs workshop against the wall. It's easier to build something new against a straight wall than a round one.

But? The round towers?

Yes, there ARE some round walls and tower. In fact there is not much round walls in the X-XI centuries, but more and more with time until the XV century where there are almost every time round towers. The apparition of canonball changed the architecture.

Arrows (and stones launched by a trebuchet) are easily stopped by a wall (square or round), but canonball are not so well stopped at all, so they began to build round towers to make canonballs slip on the wall instead of breaking it. 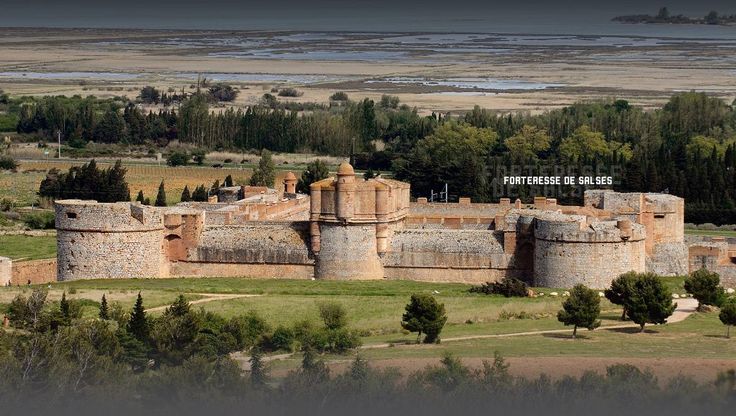 Sometimes castles are about status and economic power, where defence takes a secondary role

As others have correctly stated, castles with round towers (until the invention and widespread use of gunpowder) are more defensible and subject to less undermining in a military situation.

However, castles are not just for defence and/or military purposes - if you're not on the 'front line' of defence, many castles in the world serve as administrative centres, political statements or signs of affluence.

In a cursory top 25 most-beautiful castles in the world list, the majority all have square towers, likely as these are easier to furnish, more functional in terms of accommodation, and afford a pleasant outlook. The resultant square rooms are also easily extendible, easier to roof and simply more comfortable to be in.

The following are a small sample of square towered castles:

A common thread is the square castles are built for comfort, in already prominent positions that allows them to be furnished and comfortable, roofed for amenity, and located already securely either within practical city walls perhaps with round towers that take the role of utility and military defence, or in an easily defensible position already (such as within a city like Windsor Castle), and where square rooms allow more comfort and better outlook.

Not the answer you're looking for? Browse other questions tagged military-defense architecture or ask your own question.

30
How would the design of a habitable underground fortification differ to that of a castle?
17
In a world of magic, why would cities still find high walls useful?
16
Medieval low-energy houses
62
What is the minimum radius of a circular corridor for the walls to appear straight?
2
Could This Sort of Castle Defense Work?
17
How does a castle have sufficient anti-air defenses while still looking like a castle?
32
How would one attack or lay siege to a flying castle?
33
How useful is an impregnable castle?
4
Having a Castle before they are invented?
6
Most effective castle fortifications against fantasy/medieval airborne attack?