Thorne Zytkow Planets $-$ Can a Gas Giant have a Neutron Star core?

Said gas giant is about 5 times the mass of Jupiter, hence a Super-Jupiter. This gas giant is rogue and has no parent star. Its composition is the same as regular gas giant, i.e. it is composed of hydrogen, helium etc. but here's a catch.

The gas giant, when it formed, accidentally swallowed up a neutron star, which is now located at the center of the planet. The neutron star in question is a pulsar with 1.8 solar masses with a rotational speed of over 60x a second. The star is embedded in the planet's rocky core. Surface temperature of neutron star is about 1,000,000 K. Sort of like a Thorne–Żytkow object

What would happen if a Gas Giant had a neutron star at its core?

I guess that the neutron star's gravity and extreme temperature would cause interesting phenomena such as wind patterns, and mascons happening at various places. 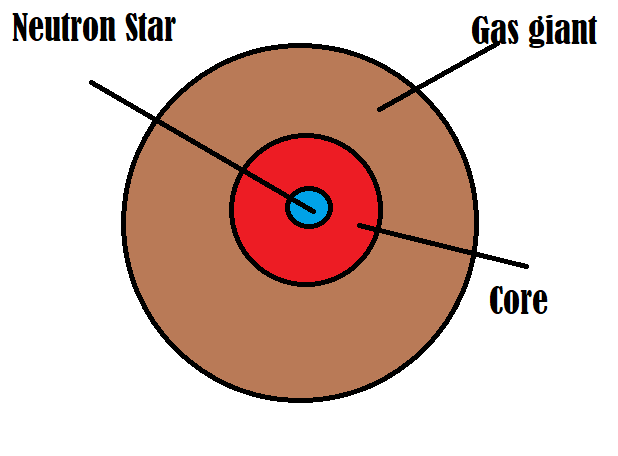 With our current understanding of what a neutron star is, it would be impossible to have it 'embedded' in a planet. Nothing we know of is strong enough to support the mass of a planet and keep it from collapsing onto the surface of the neutron star itself. The "atmosphere" of a neutron star is hypothesized to be at most a few micrometers thick. Below that is a solid lattice of atomic nuclei.

The "surface gravity" is estimated to be about 10^11 times the gravity at the surface of the Earth. If you could use some kind of magic to stand on the surface of a neutron star and hold a tennis ball at arm's length and let go, it would hit the surface and it's nuclei would smear onto the surface after just 1.87 microseconds travelling at a speed of about 1870km/s.

Mass-wise it would be like a pickup truck 'embedding' itself in a crow.

If you could magically teleport a neutron star to the core of the largest gas giant observed with a radius of 130,000 km, I think you would get a miniature nova. At that radius the gravity would be much less, only about 7000 m/s2 (about 700 times earth gravity). After about 13 seconds an object dropped from that height would be travelling at roughly 60,000 km/s, a significant fraction of the speed of light, and would hit the surface before 14 seconds elapsed.

For a gas giant the story is more complicated because the falling material would produce enormous friction and pressure and release a lot of energy before smearing on the surface, and the nuclei could undergo nuclear fusion before reaching stability in the surface lattice. 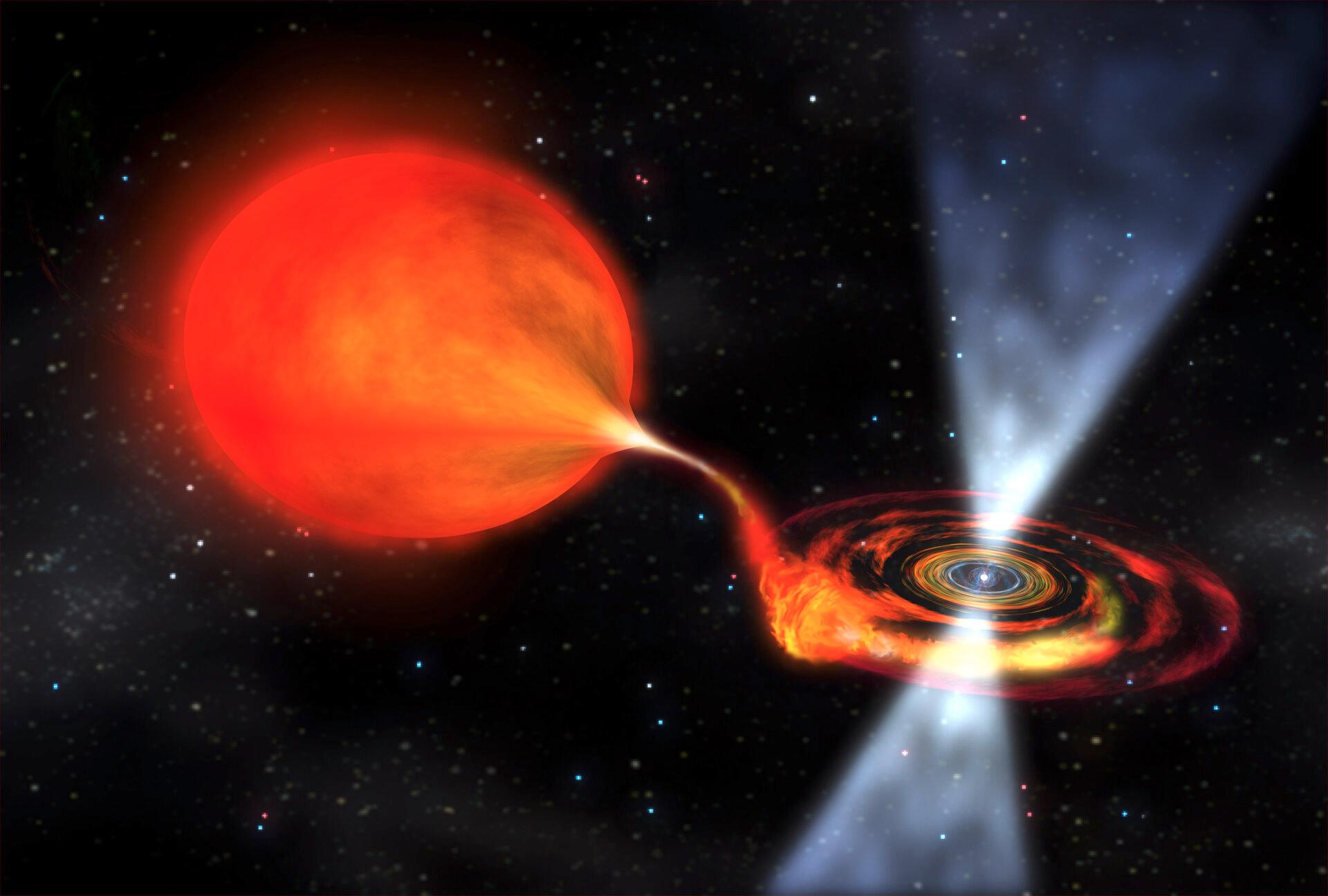 Painting by Dana Berry for NASA

The star is 400 times as massive as the gas giant with 400 times the gravity.

The gas giant does not swallow up the star. Instead the star swallows up the planet. It barely notices.

The result is a slightly larger neutron star and no gas giant.

A gas giant with a neutron star at its core is impossible.

The gravity of a neutron star is pretty strong. It would end up swallowing all the matter of the gas giant, turning it into nuclear pasta.

While it might be possible for something to orbit a neutron star, it can be nothing as dense as a gas planet: friction in the gas would end up removing momentum and causing orbital collapse. This would happen at the moment of merging.

A Type Ia supernova is usually created in Binary star systems when the white dwarf pulls enough matter from its sister star onto its surface to achieve Chandrasekhar mass (critical mass) they reignite and in some cases trigger a supernova explosion.

As above this usually happens with a white dwarf. I am not certain if this can happen with a neutron star, and likely not with only a gas giant planet to work with.

Perhaps play with placing a (very) small black hole at the center of the planet? A black hole wouldn't have the minimum mass requirement that a neutron star would, but you would still need to make it a very small black hole to prevent it from shredding the planet.

With small collision speed almost all mass of gas giant will be eaten by neutron star, with big speed You can get something like apple shoted by bullet effect and most of mass will be spreaded around.

25
Can a gas giant have its own habitable zone?
14
What kind of Gas Giant has a "safe zone" between the radiation from a star and the radiation from a gas giant planet?
3
Feasible star + planet + moon combo? Did I miss anything that makes this system wildly unstable or otherwise impossible?
4
Could this moon of a gas giant orbiting a neutron star support life?
9
Brown Dwarf Star vs Gas Giant as parent for habitable moon
2
Can liquid water exist on the moons of this gas giant?
5
If Thorne–Żytkow Objects Exist, How Far/Wide Would Their Habitable Zones Be?
12
Trying to survive a passing neutron star by burrowing deep in the planet's crust?
3
Habitability of my world