Deserts and Rainshadows near Equatorial Continent with North/South Mountains

Both mountain ranges are new and likely similar to the Andes, though not quite as tall given that the planet is a bit larger than Earth so I imagine that this would have an effect.

That said if I look at any sources on deserts they suggest they cannot or should not form on low ground near the equator due to the low pressure zone causing too much rainfall. That said, if I go 10/15-30 n/s I end up with this weird banded desert where there is hot desert on either side of my continent with tropical savannah or steppes in the middle. I am making the assumption that near the mountains and especially where elevation is still somewhat high I can throw in hot desert a la Somalia or Chile even near the equator, but what about the continental interior? There are cold currents, winds away from the coast and a tall mountain range casting a shadow, I feel like I should be able to merge the desert, should I taper it in towards the mountains? Putting more towards the interior and tapering out towards the coast? Should I push the desert to like 5 degrees on either side and leave a thin band of savannah in the middle?

Pictured are my two continents, one with the desert already filled in and one that hasn't been laid out.

You can see prevailing winds and ocean currents. Plates are too faint to see in these pictures, the spacing is done per 30 degrees with 1 degree squares filled in. Black blobs are approximate locations of mountains while light blue is savannah, dark blue is rain forest and red is hot desert as from the exact color guide on the Koppen classification Wikipedia page. 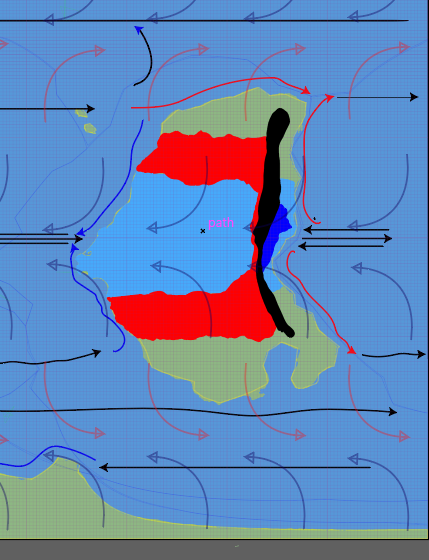 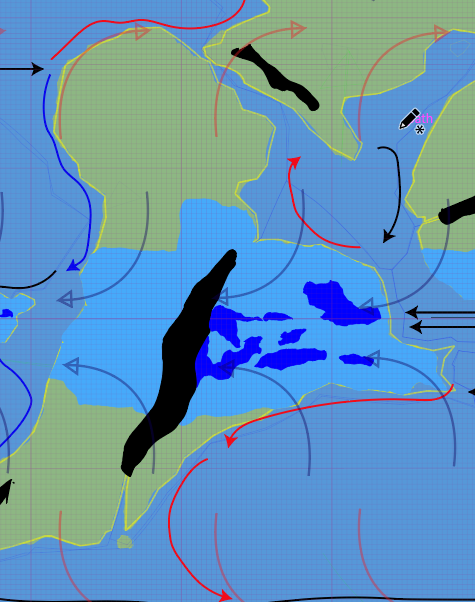 EDIT: Forgot to mention that average planet wide temperature would ideally be about the same as Earth's +-2c at most, that being said this planet is orbiting a smaller star closer to the edge of the habitable zone but all else being equal we can assume this planet would receive slightly less energy but have a slightly thicker atmosphere which my best efforts have been to compensate for this and give it about the same overall climate as modern day earth if again not slightly cooler. It has much less seasonal variation having a slightly more circular orbit and a 10 degree axial tilt. I've done my best to still allow for thermohaline circulation though I'm not sure if my southern continent would allow for it but I made sure to allow for one circumpolar current by leaving the north clear. Happy to provide other pertinent information.

¹) The only exceptions are very high plateaus and large land masses around the poles, which are almost guaranteed to be quite dry. But only almost guaranteed; ten million years ago even Antarctica had forests.

8
What is the climate of a mountain range at the border of the polar front?
22
Are tropical fjords possible?
7
How would a large arctic mountain range affect the weather?
1
How can I keep an area next to a mountain range from being a desert?
2
Does my climate map work?
4
Climates of a Eurasia-like continent in the tropics
7
Can I eliminate a dry continental high pressure spot inland by adding a huge body of water in the middle of it?
3
Is my large tropical continent too dry or not dry enough?
3
Could a hot desert plausibly exist in this location?
4
Habitable planet without oceans and with all rivers flowing towards the poles