Can I get away with lowering gravity so that the usual solar masses in our universe are simply planetary masses in the setting's universe?

I want the world to have an extremely long age of discovery, such that even if they were to use a ship to travel in a straight line across their planet's ocean for hundreds of years they'd still be discovering new lands and peoples and so on and so forth.

In an effort to accomplish this I've lowered the overall strength of gravity such that a solar mass in our universe is just a planetary mass in the setting's universe, with a planetary radius to match, so you can see where I'm going with this. Essentially the goal is to create an Earth-like planet(with Earth-like gravity) the size of a star(let's say ours, Sol).

Problem is I don't know if I can get away with weakening gravity to such an extent, whether or not life as we know it would still be able to evolve in such a universe, whether or not things would still work somewhat normally with such a weak gravitational constant.

Can I get away with lowering gravity so that the usual solar masses in our universe are simply planetary masses in the setting's universe?

Your Universe is Fantastic!

I would like to advance this Stack's core belief to you. From the Help Center we read:

World building includes geography, culture and creatures for the world, not to mention magic and planetary physics, in short, everything from the physics underlying your reality to the entire universe you want to build.

Far too often we think of ourselves as Physics Lite. We start to believe that there are only two kinds of imaginary worlds. One that's entirely defined by magic and the other that's just Earth by another name. Even you're tempted to believe your imaginary world can only exist within the rigid and boring context of known science.

You have no obligation whatsoever to explain, rationalize, or justify those world rules. That is the nature of YOUR universe. It's cool beyond measure! Every discoverer in human history would wish for a world as filled with mystery as yours.

Ignore everyone who says you can't do that and go do that.

From a physics standpoint, the usual answer given is that if you change any of the universal constants by even a tiny bit (8th or 9th decimal place, say), you produce a universe in which life cannot evolve. Mess with the gravitational constant, and either stars don't form, or they're tiny and have a lifetime of a few decades instead of millions to trillions of years -- or perhaps they always collapse directly into black holes when they burn all their fusion fuel, meaning no second-generation stars and no rocky planets.

What your world needs is a healthy dose of handwaving.

Perhaps your world is a hollow spherical shell, only a few times as massive as the Earth (just enough to give that 1 G at surface, however large it is, and no one will ever know what keeps it from collapsing). Perhaps your universe has an extra dimension, so the surface area of a (hyper)sphere goes as the cube of radius, instead of the square. Perhaps there's a constant haze high in the atmosphere that makes navigation much more difficult (maybe impossible before magnetic compasses are discovered). Perhaps extreme storms mean only one ship in a thousand that ventures more than a couple days out of sight of land is ever heard from again.

Maybe new land rises from the ocean on an ongoing basis (and if you miss it for twenty years, it'll be covered with at least plant life and birds by the time you do find it).

You're doing a lot of handwaving to lower the gravitational constant anyway -- enough to get labeled as fantasy (as was the case with Prince Valentine's Castle and its sequels, which also had an unreasonably large world). Why not go all the way and avoid having to try to explain stuff, when the explanation is much harder to swallow than "This is how it is and no one knows why."

Size isn't directly proportional to range or speed. Some tiny creatures, like monarch butterflies, can travel on continental scales much more easily than humans do. However, disproportionality can also work in your favor. Imagine a crew of pygmy marmosets crossing the Ka'ie'ie Waho Channel to get from Kaua'i to O'ahu. Proportionally, we could compare them to a crew of humans crossing the Bay of Bengal to get from Sri Lanka to the Andaman Islands. Their challenges, however, would not be to scale! To them, meter-high waves would be towering walls of water, eight times the height of the tallest sailors. Smaller species tend to have faster metabolisms, so they'd have to pack much more food and water relative to their size.

I don't understand the negative answers to this question. I think it can be done just fine, and I don't really even see a problem with it. As you said you can just make the gravitational constant smaller, and you will then be able to have a planet that's much bigger than the Earth but with the same surface gravity as Earth.

As one answer points out, if you really wanted to be hard-science about this you would run into problems with cosmology, in terms of how stars and planets form, how quickly stars burn, etc. But that could easily be handwaved by just saying nuclear physics works differently in your world. (Or by just not mentioning it if it isn't important to the setting.)

So let's just say planets and stars can form ok in your universe, and we have our planet that's 100 times the radius of Earth (with 10000 times the surface area), and its surface is made of the same kinds of stuff the Earth is. Here are some consequences of that:

CC BY-SA image of oblate spheroid by Tomruen from Wikipedia 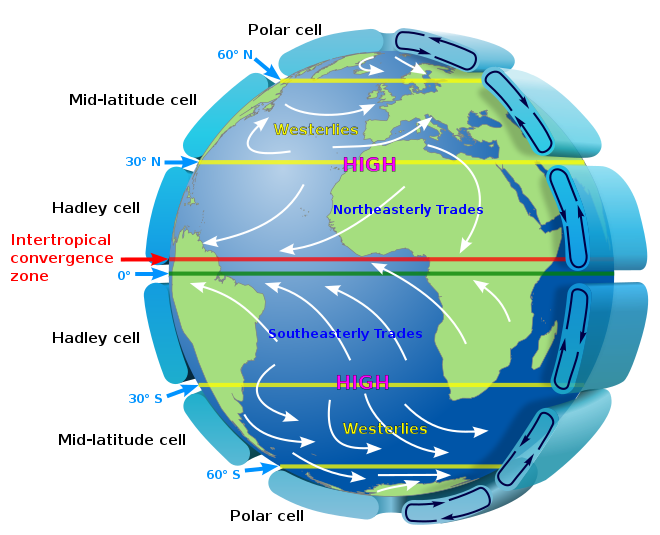 The reason there are six cells has to do with the thickness of the atmosphere compared to the planet (among other things), so on your planet it will look different. I imagine you would either have a lot more cells, or it won't be broken up into cells in the same way and could be a lot more chaotic. This might work in your favour though, because it might mean you can have giant deserts (even bigger than Earth's), or whole continents where it's really windy, and other such interesting things for your world's travellers to find.

Leave gravity alone. Instead, some extremely advanced race built a Earth-orbit-sized shell of material 4000 miles thick and the inside is somehow handwaved to be totally empty. This gives an apparently Earth-normal world except it's the size of Earth's orbit.

Not only do you get great areas to explore but while flight can develop normally there can be no space program without major breakthroughs (to get into orbit you need antimatter rockets) so it never gets pre-empted by camera satellites.

You'll want a very thick atmosphere to protect you from grains of dust, that will make flight easy but slow.

The first question you have to ask yourself is : what is the biggest terrestrial planet size we could find in the universe. Lucky you, someone already asked this question, on this sub : See here. The answer provided is : ~2Re (with Re: Earth radius).

Now to give you a bit of a solution, in the case we are taking this 2Re Planet as your planet. The surface area would be 4 times the Earth's one (A=4.pi.(2Re)^2). And four times the earth surface is really huge, considering your planet is heavier (and to add to this, let's suppose it has a bigger gravity) a ship would be slower to run across the globe.

The first recorded circumnavigation took 3 years without the exploration part, the second one took 11 years. Considering your ship does not have plans to rush the circumnavigation, is slower to perform the trip, has at least 4 times the perimeter (if going straight because earth perimeter is pi.Re.2) to cross (but you could say it's for discovery purposes so not straight at all, with big pauses to explore etc..). Having a 100-years trip could be reasoneabale with this configuration (without considering the logistic and the fact humans does not live 100years).

EDIT: I only answered considering we are in the actual world (with the same physical constants). Messing with those parameters is almost impossible without affecting the entire universe and one could believe messing that much with the gravitational constant would make life impossible (if not the whole universe) as another user said.

Actually the question barely has any meaning.

Changing gravity won't change any object's mass. Gravity applies to mass, but doesn't modify it. The same way, you will not say : "Can I get away with reducing my magnet to the point where there is barely any iron remaining in the coin?".

Gravity will change the intensity with which any mass is attracted to another, though. Maybe that's what you meant. This is a couple of consequences I can imagine.

From a physics perspective I think this becomes more problematic than just having a really large planet and ignoring the physics (if this is fantasy rather than SF even moreso).

If you particularly want a huge world that obeys physics there are a couple of ideas you might consider:

If you want your setting to be science-based, stay away from quantum/relativistic stuff where the things will get really, really messy.

On the other hand, from the classical physics standpoint, you have to deal with:

9
How could the air be stopped from falling off of a flat world?
19
How does gravity affect evolution of life?
0
World with core of changing mass, gravitational effect on tides?
8
Spaceship orbiting a black hole under the event horizon - a prison where no one escapes
13
Can the Sun lose enough mass that Saturn's current velocity becomes escape velocity?
6
Scale model solar system in interstellar space - will it work?
2
'Air' in Space & Planetary Rotation
4
Can we build a planet with a hyperbolic surface?
8
Preventing black hole formation in a water-filled universe
6
How close to themselves could be two planets orbits?